See the updates at the bottom for our best advice.

Now that it is diet season, we thought it would be a good opportunity to make some lean protein like a turkey on the BGE. It was one of the first things we made on the egg and it was delicious. We thought it would be a great idea to make enough that we would have some left over turkey for sandwiches so we cooked two. We were a little surprised by the scarcity of turkey just after the first of the year. They must think most folks are sick of turkey. Nay I say. 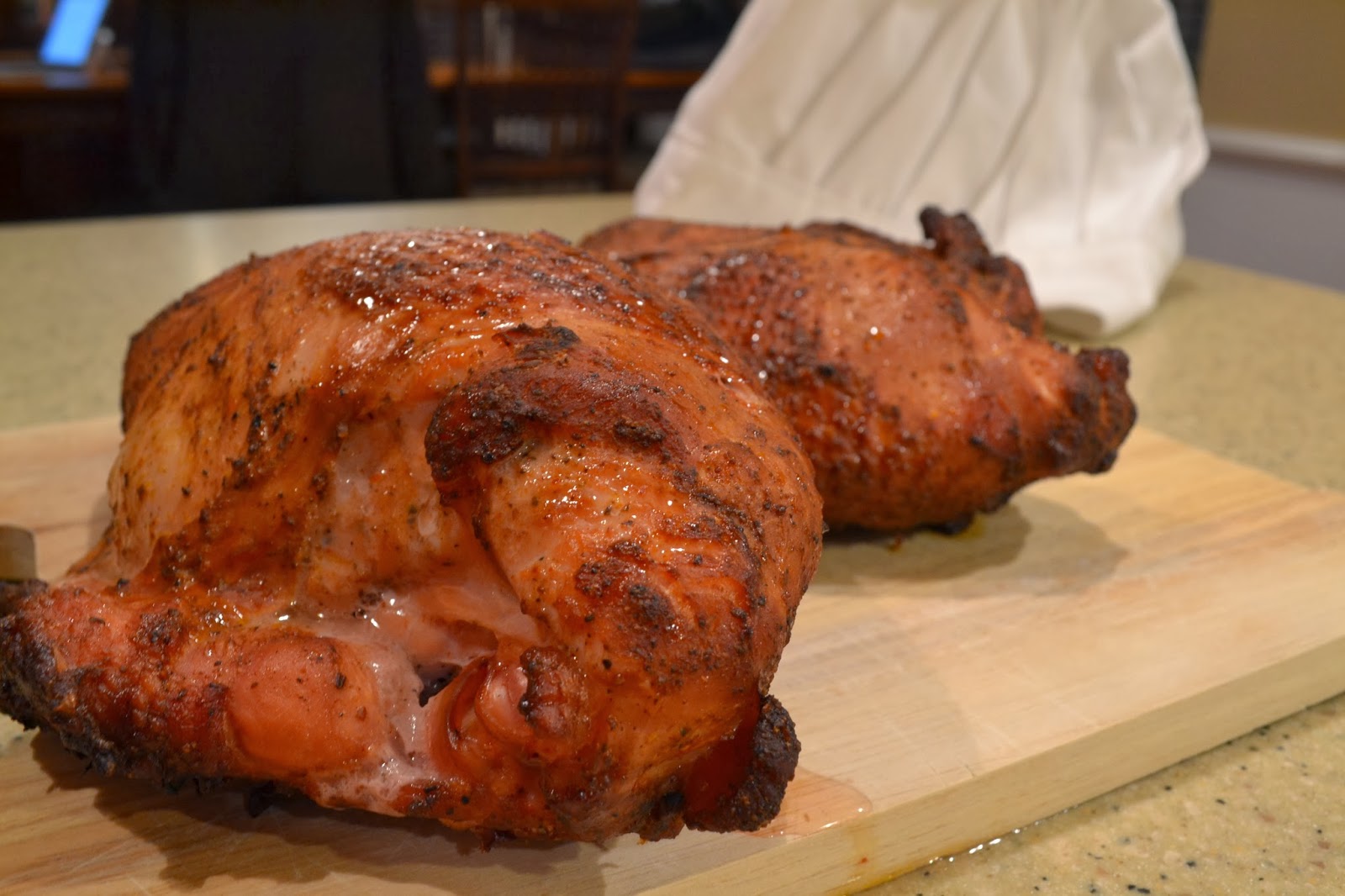 We ran across a great youtube video that stepped us through the process. Thank you FlamingRoosterBBQ! It was what we used to prepare our turkey.

We will simply heat the egg to around 240-250, toss the turkey in the bag with the oil and rub then place on the grill for around 2 hours or until the middle of the breasts reach 163-165.

First, let me address a major mistake that was made around the turn of the year. Somehow in a fit of healthy idiocy I pledged to not drink any alcoholic beverages until I lost 5 lbs. I am 9 days into this agreement right now and it feels like it was short sighted, mournful and regretful. Alas, I have been sentenced to grilling without libation.

Light the egg and stabilize the temperature around 250. 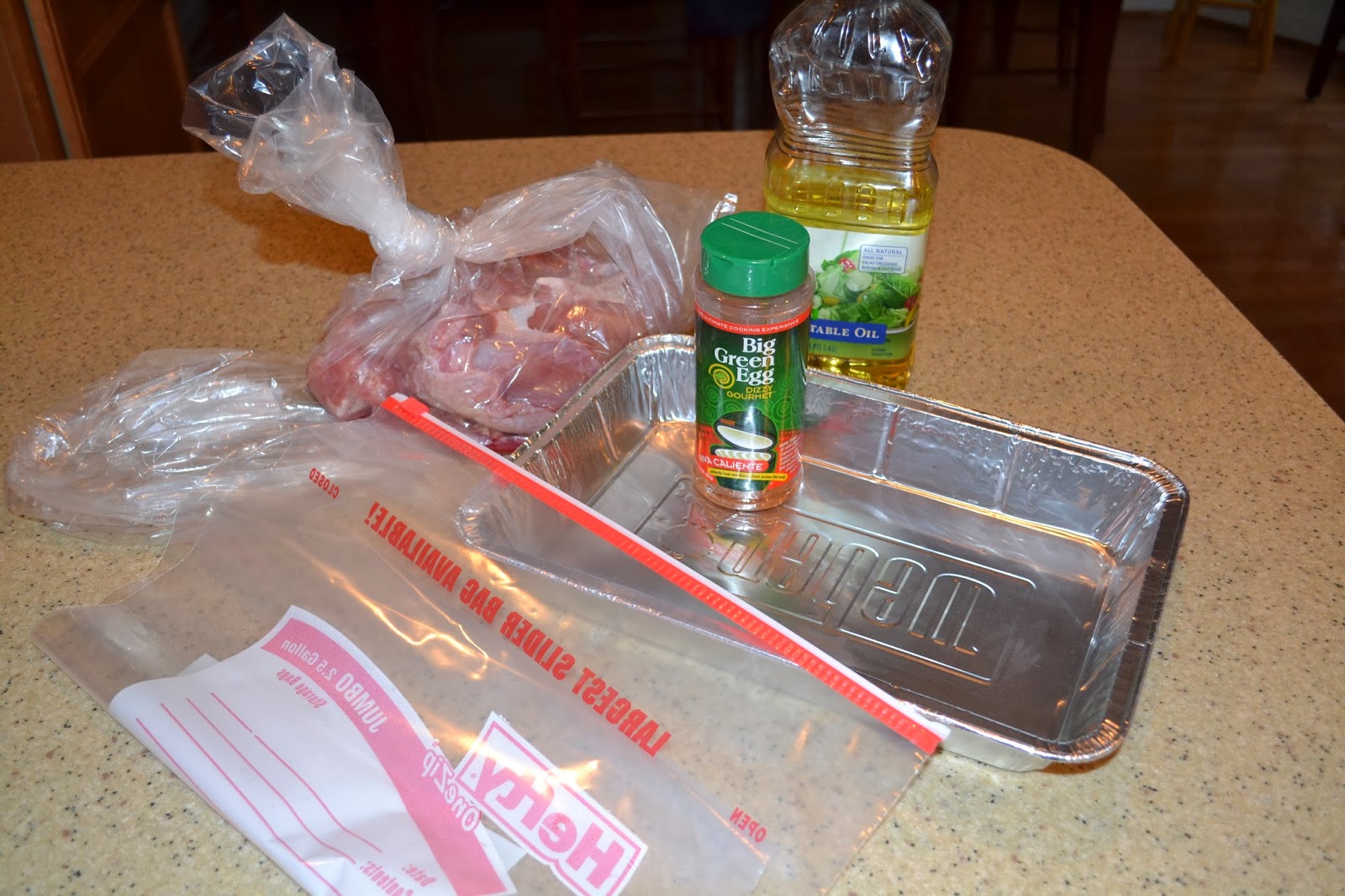 In the mean time gather the ingredients and prepare the turkey for the grill. 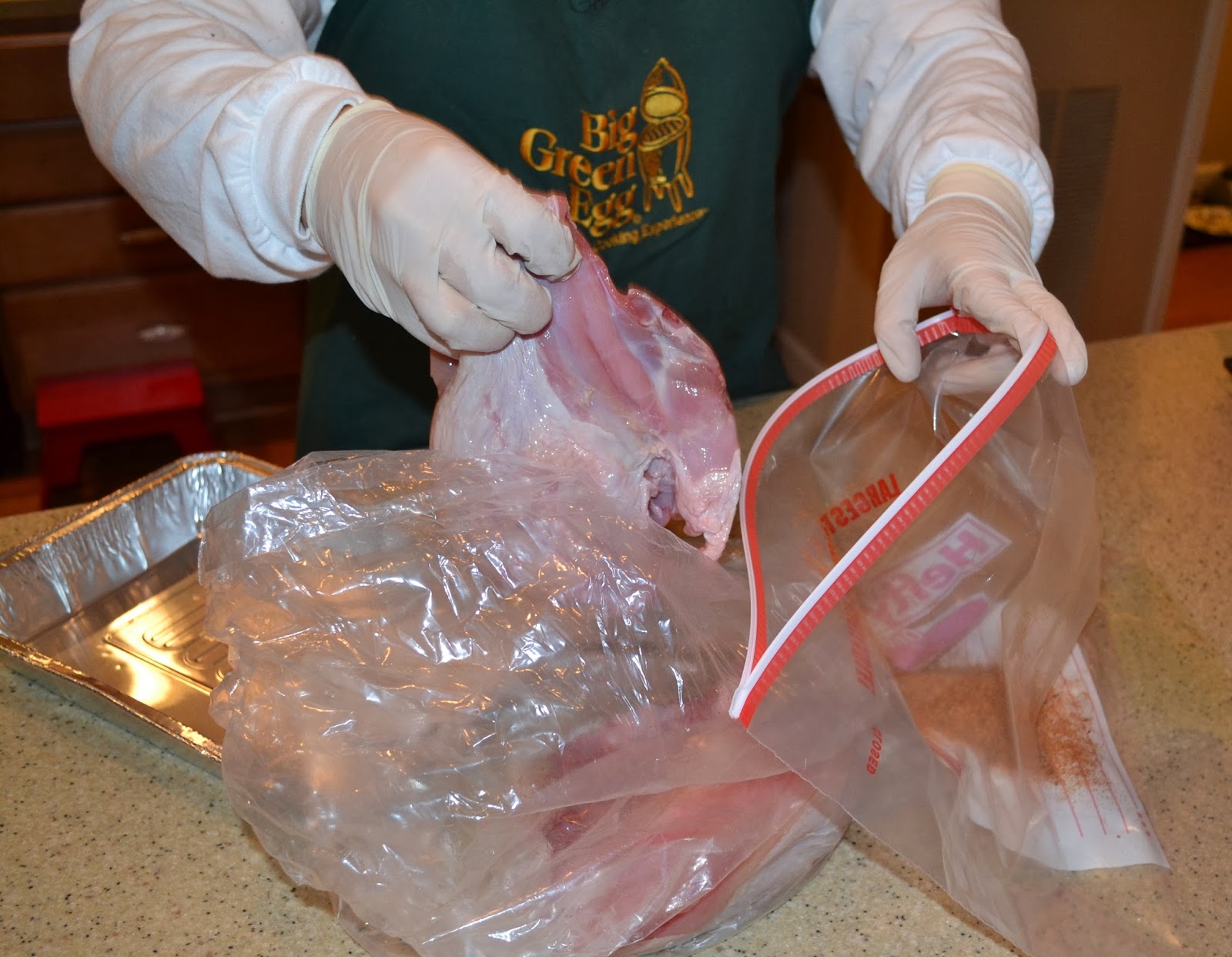 Place the oil, the rub and the turkey into the bag and shake it up. 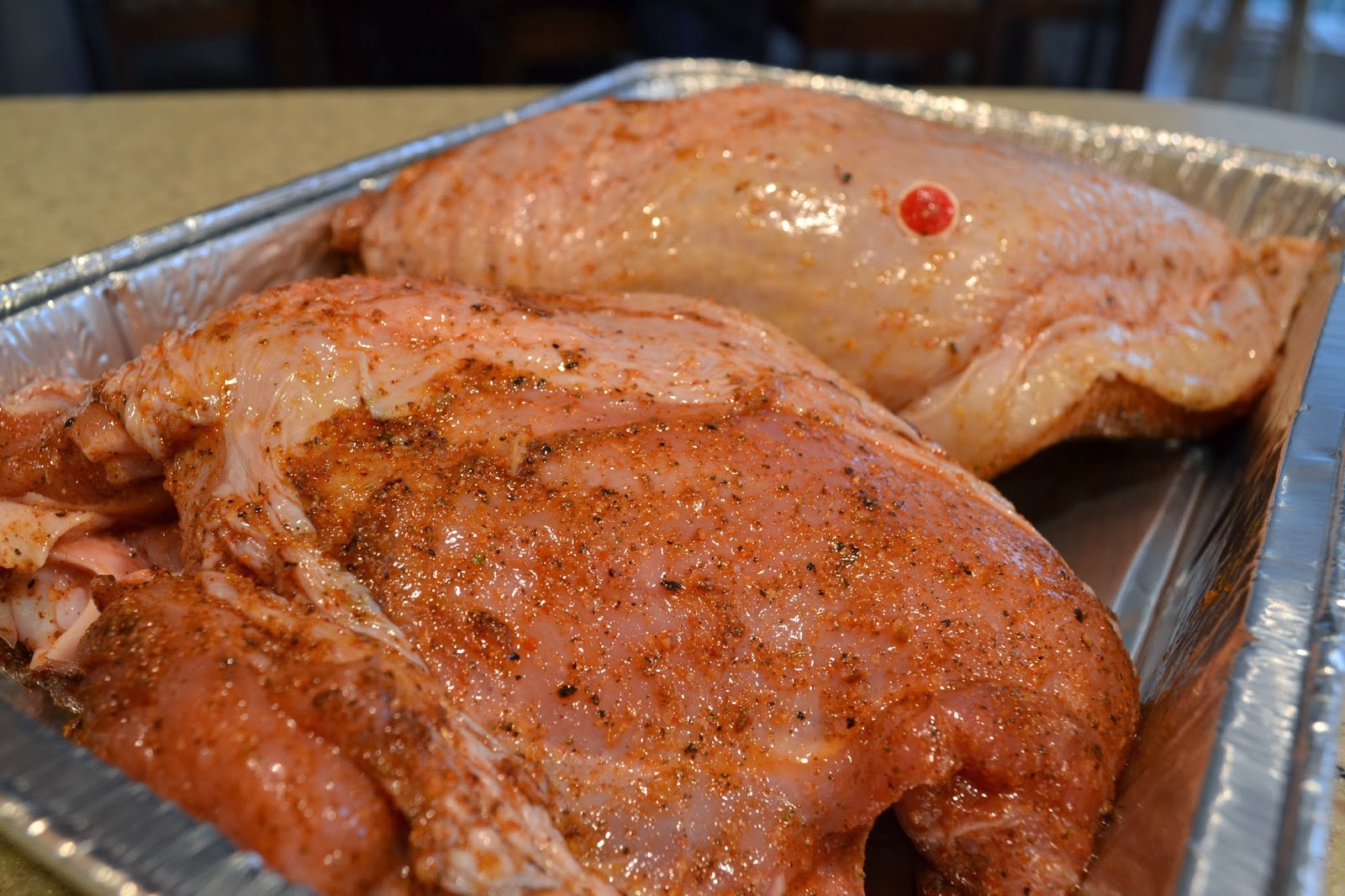 Then place them on the BGE, insert wireless thermometer and drink a... coke zero... 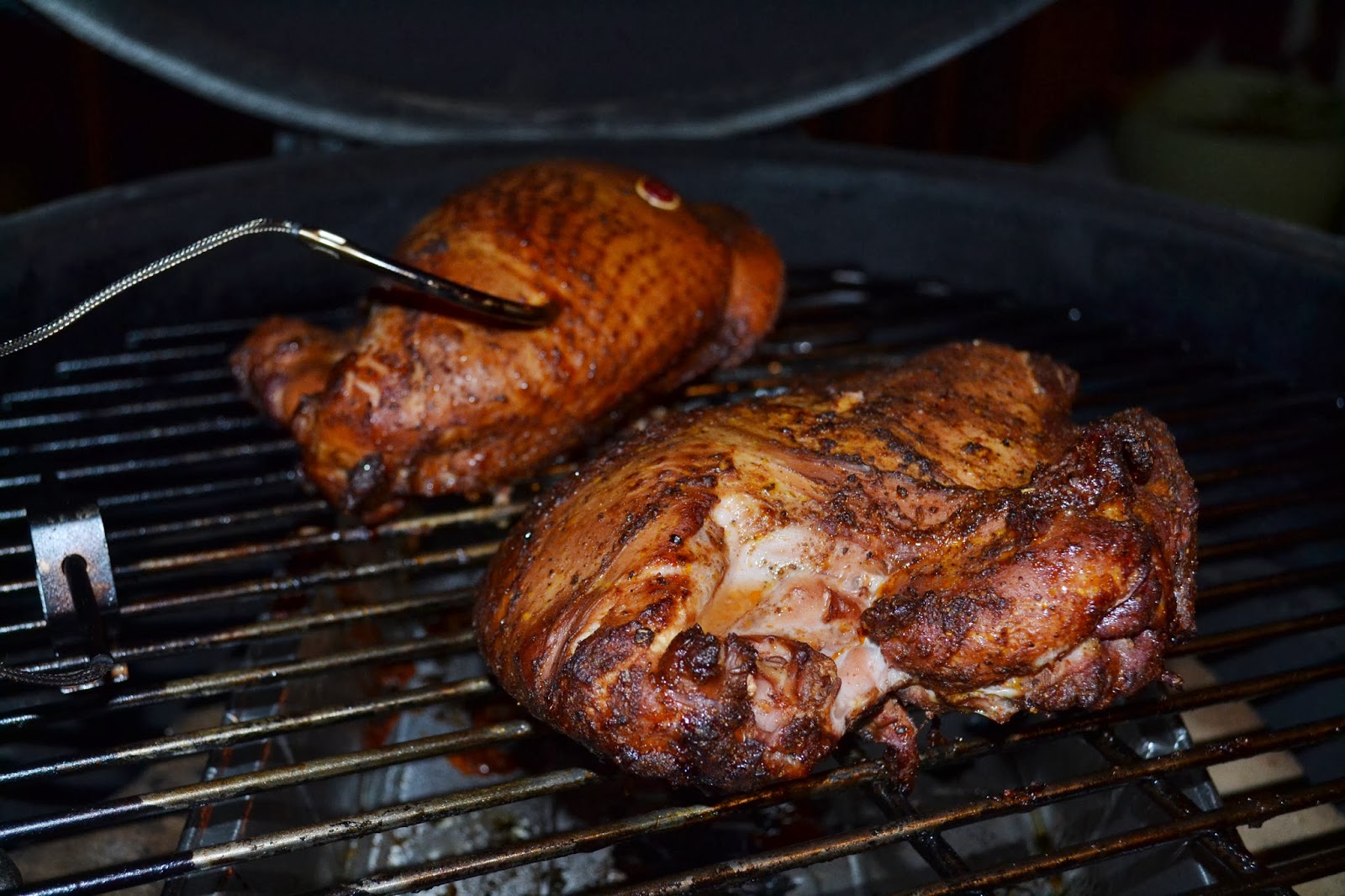 Here we are cooking. It was sometime around here that I realized that the BGE wireless thermometer had let me down again! 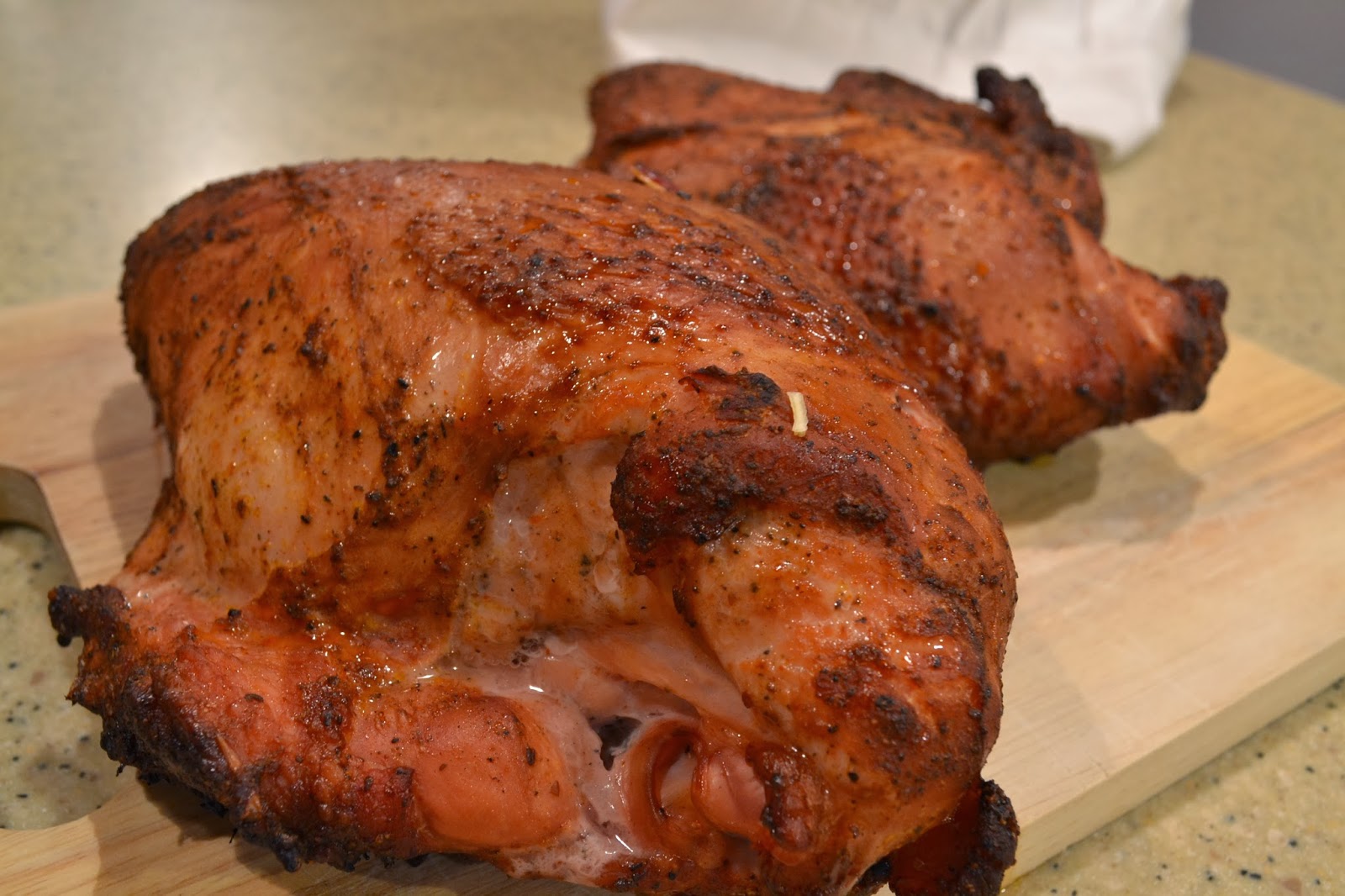 Actual cook time was more like 3.5-4 hours. I had a hard time getting a good temperature reading from the wireless thermometer.

The bird came off looking like a million bucks. Our instructor advised us to let the bird rest but it was getting late and we were hungry so we ate part of it and let the remainder rest before placing in the fridge for future consumption. Nothing feels better than having smoked turkey in the fridge.

As good as it looked, this was a disaster and I am not sure why. I kept the egg at around 250 but it took the turkey almost 4 hours to get to 170. I say 170 because my BGE wireless thermo was off by at least 10 degrees again so I ended up switching to an analog and then overshot the temp by 10 degrees or so and that resulted in a dry bird that was over smoked.

Next time I will throw away the BGE wireless thermo and go analog all the way. I will also cook it at a warmer temp. Perhaps 300 or 350 would be more appropriate to get the turkey to temp quicker to reduce the time the turkey took to cook and hopefully keeping it from drying out.

I'll be following this up with another try soon. I'll also get a better thermometer.

Additional information on testing my thermometers:

I spent some time testing various thermometers using a pot of water on the stove. I placed the BGE food probe (taking care not to submerge the part of the probe where the probe meets the cable), a small analog thermometer and a more expensive CDN digital instant read thermometer. I started heating the water at tap temperature and let it go all the way to boiling while watching all three thermometers. Turns out, the BGE thermometer's accuracy isn't too bad as it rises from tap water temp. to boiling temp. It did seem to hold on a temp and then suddenly leap 2 or 3 degrees every now and then which explains a phenomenon that I occasionally noticed when I thought the meat was plateauing at an unreasonable temperature  The only caveat noted was that it measured 4 degrees too hot at the end. It was accurate all the way to 212 but then continued to rise to 216 as the temp on the CDN remained steady at 212.5 or so. Also it was noticed that the analog thermometer measured about 5 degrees cooler than actual temp.

So... It is likely that my turkey was overcooked because I continued to cook it by relying on the analog and that resulted in an overcook.

We've since learned that the thermapen thermostat (see link below) is the gold standard for quick and accurate meat temp. Get it.

Update to the update:

We made another turkey last night (this was a whole breast so it was not split into two pieces as shown on the photos above) and this time we used the wireless thermometer and the CDN instant and cooked it beer can style (refer to the beer can chicken post for more info on this method). We discovered that the wireless just doesn't give a good reading in a turkey, probably  because the probe is large and can't seem to get good placement in the breast. No matter where I put it, it never gave a good reading. So I relied on the CDN.

I cooked the turkey at about 350 in the BGE for about 2.5 hours for 5 lbs of turkey breast. I cooked it until it measured at least 160 degrees in many locations in the breast (make sure you are measuring breast meat temp as that is the part you will be eating). This time, it turned out great.

Another update on this link (it is our review of the DigiQ but we cooked a whole turkey to test it)! 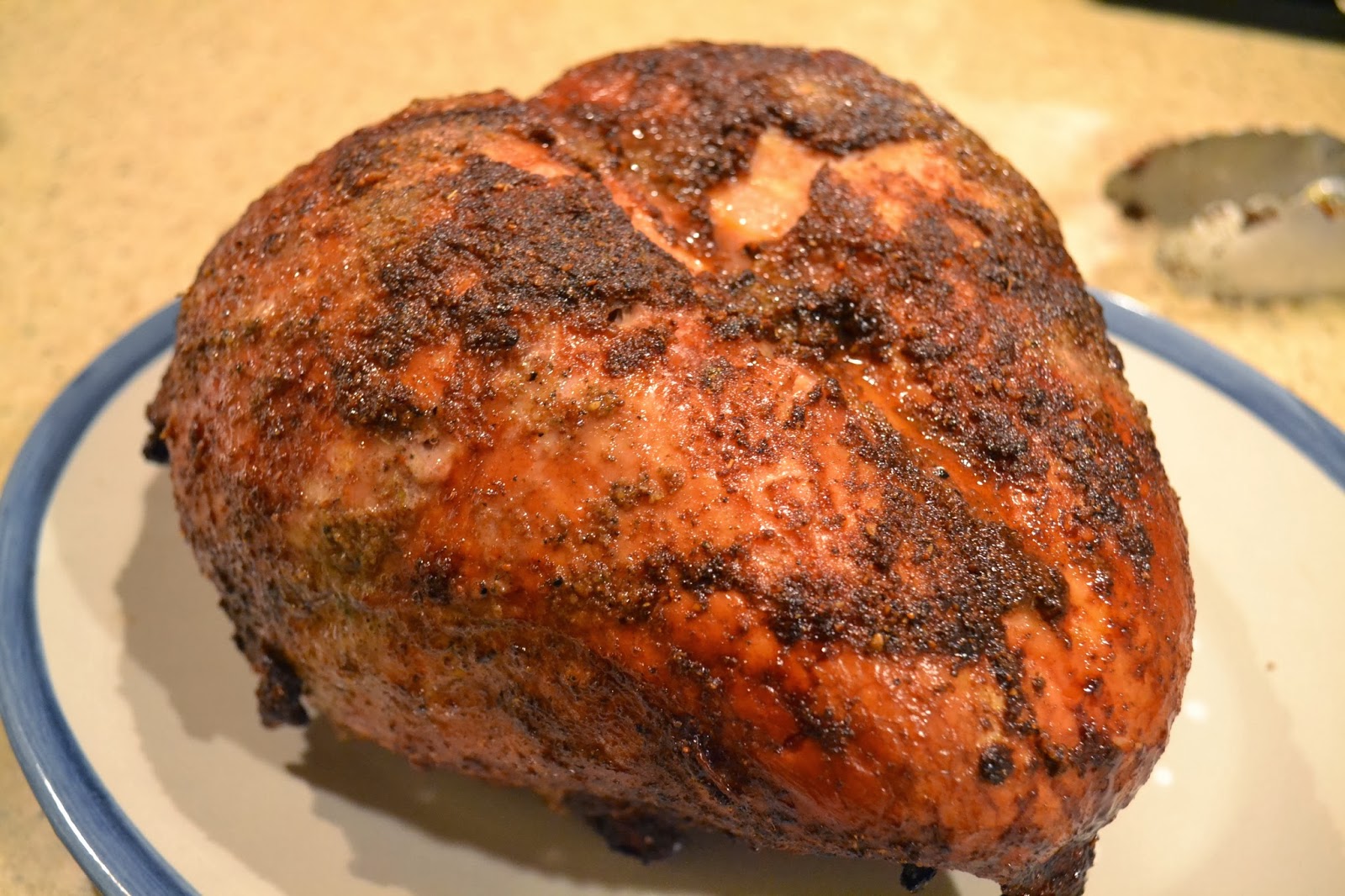 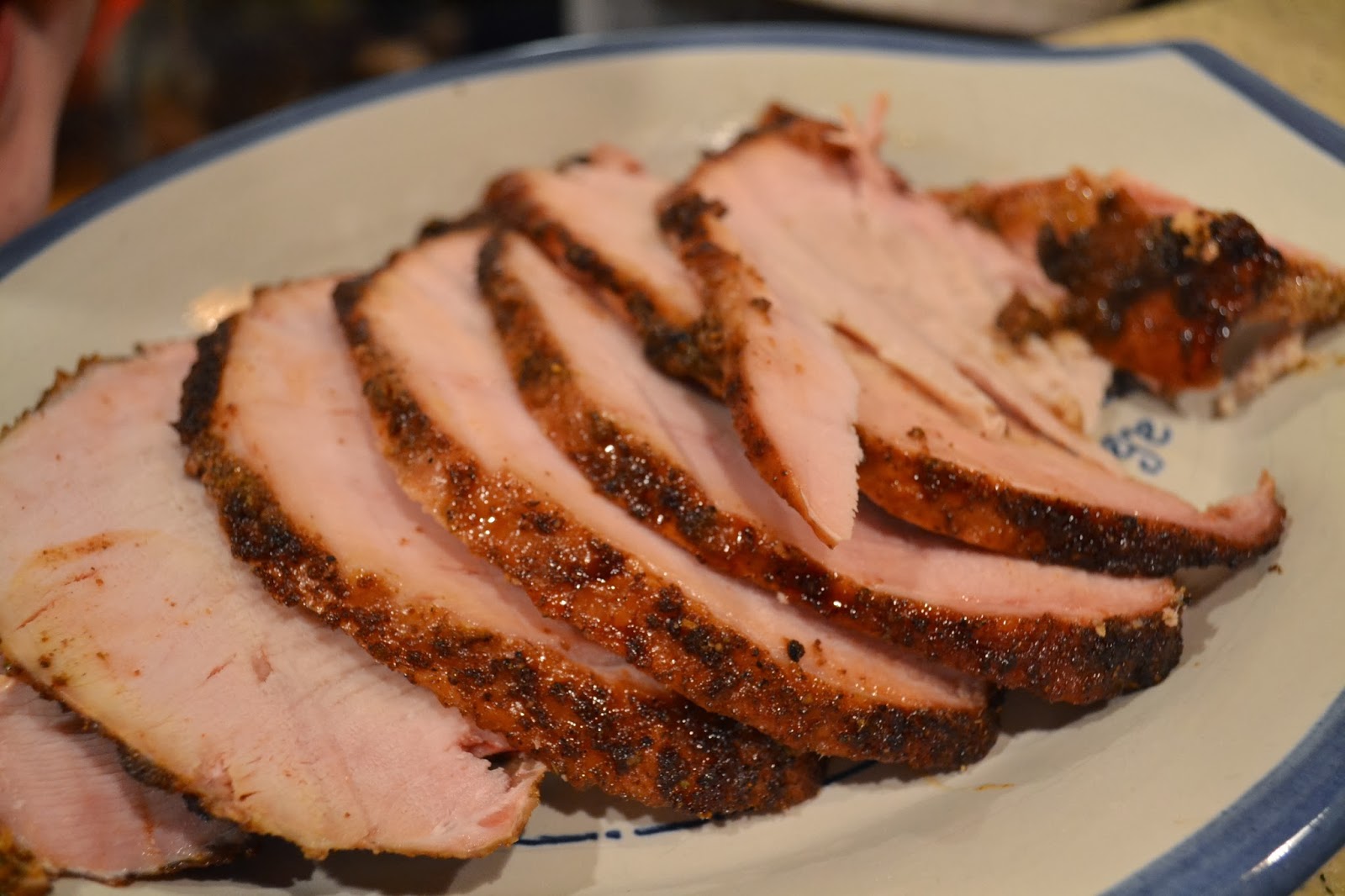 Posted by zdlatham at 10:37 PM
Email ThisBlogThis!Share to TwitterShare to FacebookShare to Pinterest