This is the season that we are looking for ways to use and to save fresh produce out of our garden. The challenge this week has been for a unique way to save some of our home grown cucumbers. We came up with a simple refrigerator pickling process that doesn't require us to cook or to seal the jars, but this time-saving technique means we must keep them in the refrigerator and use them within 6 months.

The only research I did this time was some quick Googling around where I found this recipe on allrecipes.com and this one from About.com on Local Foods. I used a modified version of this for my receipe.

Slice up the carrots and cucumbers while preparing the brine. Stuff the cut-up veggies into freshly washed jars, pour in the brine, seal and place in the fridge. Pretty simple and quick. I also picked up some pickling spice mixture to add a little kick.

First grow some cucumbers ;) and pour a glass of wine.

I used an old bottle of Moscato white wine that I was pretty sure wasn't going to see the bottom of a glass. So, I was a little concerned that the sweetness of the wine might have a negative effect on the results but it turned out fine.

While the brine is heating...

Decided to keep some of the stems to add interest to the jars... 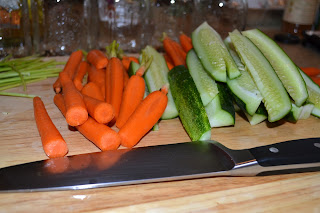 Then Stuffed everything into the jars. 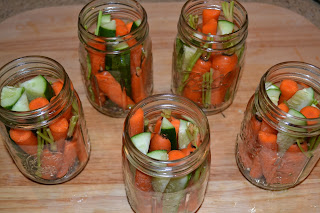 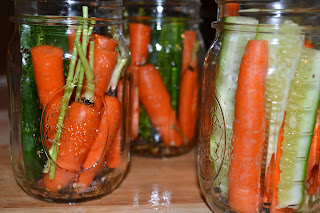 After the brine boiled for 2 minutes I decided to cool the whole thing down to 150 degrees or so before pouring into the jars because I was afraid the very hot liquid would break the jars.

Finally I tightened the lids finger tight and put them in the fridge.

I let these pickled carrots and cucumbers sit in the refrigerator for one week before pulling them out and trying them so that I could report to you how it tasted. After one week we were delighted with the results. They tasted light and tart and tangy and the vegetables were still crisp.  It was exactly what I was hoping for.

We will check back in later as they age and see how the taste changes, but I can say at one week they are really good.

Posted by zdlatham at 8:20 PM
Email ThisBlogThis!Share to TwitterShare to FacebookShare to Pinterest