This was an experiment that was borne out of a cooking demonstration that we attended at Barcelona Wine Bar in Atlanta, Ga. At the demonstration, Barcelona's chef, Shane Devereux, prepared a traditional Paella for us and taught us how to get that wonderful "crust" on the bottom.

This dish is delicious and a lot of fun to make. You should not hesitate.

We visited Martha Stewart's Seafood and Chicken Paella recipe located here and pretty much followed the recipe. This is another good example of us just picking out something we thought might be good to eat and fun to make and made it together for the very first time. It is so much fun to experiment.

We did not use the saffron in our preperation. We didn't have any, and it is expensive and optional, so we decided to make it without this one ingredient because we really didn't want to risk wasting an expensive ingredient on a failed dish.

Saute the chicken separately until lightly browned, and then cook the chorizo for several minutes. Add in onion and garlic and saute for a couple of minutes.  Add tomatoes and simmer for about 10 minutes, or until the tomatoes start to reduce down. Add the rice and broth, put the chicken back into the pan,  and bring to a boil. Add in the seafood and then put everything into oven at 350 degrees for 10-12 minutes, or until the liquid is absorbed. Doesn't seem to bad?


We did break down and buy a paella dish so we could used the right equipment for this dish. We bought it at Target for $20 and then gathered the ingredients.

We used six chicken thighs and sauteed in a little olive oil.

Then we added in two links of chopped chorizo, 1/2 of an onion and 1 clove of finely chopped garlic and cooked until brown.


So far so good. It smells great.


Fresh tomatoes, both yellow and red, from the container garden and farmer's market. What a great taste.

Before adding in the tomatoes, we set the chicken to the side.

Meanwhile, heat up 4.5 cups of chicken stock and 1 teaspoon of paprika on the stove so it will be hot when you add it. You would have added the saffron here if you had it. 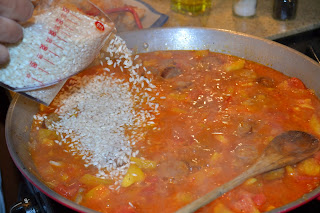 Add in the 1.5 cups of Arborio rice poured evenly over the dish 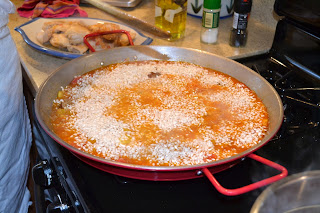 Add in the stock as it appears to get a little dry. 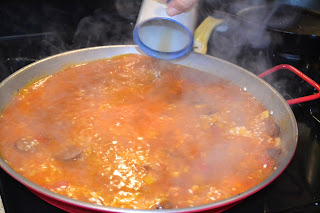 Add the chicken back to the pan and allow to cook for 15-20 minutes until about three-fourths of liquid has been absorbed by rice. 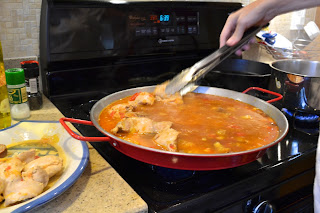 Now, add in the seafood. We used scallops and shrimp because for some reason neither the Whole Foods or Kroger that we went to had mussels. There must have been a run on mussels earlier in the day.


Into the oven at 350 degrees for about 10 minutes


Take a look at that! 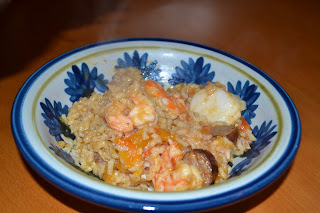 We loved it. It was tasty, smelled great and the kids LOVED it.


A couple notes for future preparations. The paella pan makes a lot of paella. We served 5 people and had enough left over for 2-3 more servings. Keep that in mind.

Also, mussels would have been nice. We will add that next time. We will also add the saffron.

Finally, we didn't get much of a crust. We think it was because the pan was large and the burner was small so we didn't get an even heat. Not sure how to fix that just yet...

Posted by zdlatham at 9:14 PM
Email ThisBlogThis!Share to TwitterShare to FacebookShare to Pinterest