It is the middle of tomato season here in the South. We have an abundance of ripe home grown varieties that we somehow need to find a way to eat or to preserve for the winter. It is a nice problem to have.

We recently attended a preserving class at a great little store here in Atlanta called The Preserving Place with none other than Chef Linton Hopkins! and so we felt inspired to put our new knowledge to use.

Chef Hopkins turned us onto the Southern Foodways Alliance as a great resource for identifying the real stories and recipes of the South. I say real because he was quick to point out that the fattening fried meals that we may associate with the South are not very Southern and is but a small snippet of the foods and traditions that we have celebrated all the way back to when the Indians were trading crops with South America. We didn't realize that Chef Hopkins is not only a premier chef here in Atlanta but he is truly a professor of Southern cooking as we were treated to a seminar on the diversity of Southern cooking and the origins of some of our favorite meals and ingredients.

We learned that the goal of preserving is not for the preserved food to sit on the shelf for more than one year but to simply carry that food forward into the winter season so that you can open them up and enjoy the summer's bounty during the winter. Put away tomatoes and peaches and other things that you might want to supplement your winter meal as a special treat. 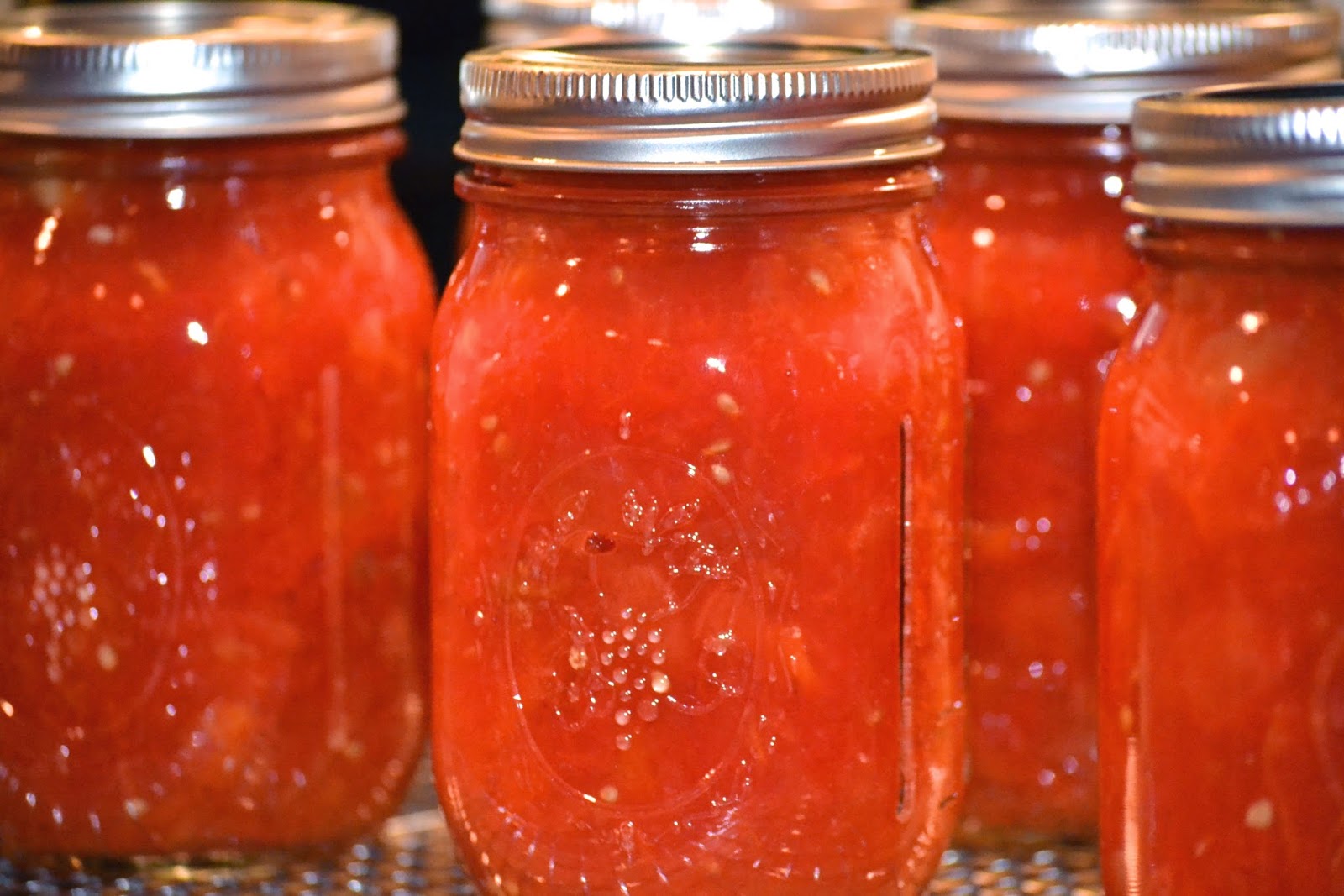 We attended a class at the preserving place and we also relied on the ball blue book and an article in the July/August issue of Taste of the South magazine that we had to buy online to get access.

Here is an amazon link to the Blue Book:

All of your tomatoes except for the few you want to use for BLTs or salads or big slices with salt and pepper.
Salt
Bottled Lemon Juice
1 quart Ball lids and jars.

We used about 15 pounds of tomatoes which made 8 pints of crushed tomatoes and 3 pints of tomato juice.

We will blanch the tomatoes, strain out the juice and seeds, heat the tomatoes to boiling and then simmer for 5 minutes. Then place in jars with a 1/2 teaspoon of salt and a tablespoon of lemon juice. Seal the jars, heat the jars in boiling water for 10 minutes and then set on a rack to cool. Finally, verify the lids seat properly.

We decided to use pint jars to store our tomatoes because we wanted to have a ready made size for making marinara sauce this winter in a two serving size. We thought quarts would be too much for two people.

This is a hot process folks. Plan this work in the evening.

First gather your tomatoes. We used both patio tomatoes that we grew and supplemented with a bulk purchase at the neighborhood farmers market.

Carefully avoid those abominations that they sell at the grocery store. Those aren't tomatoes, maybe they are Soylent Green? 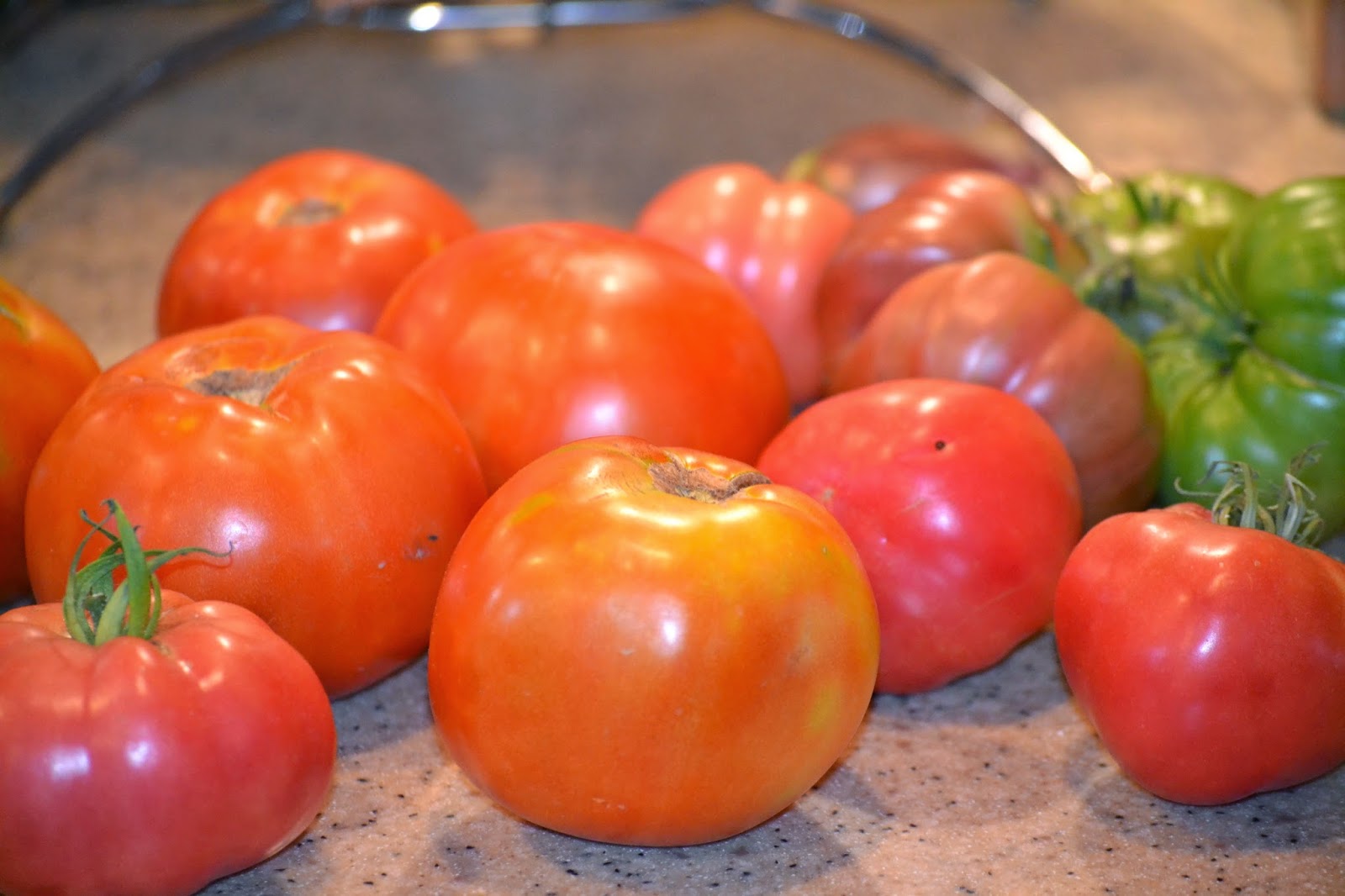 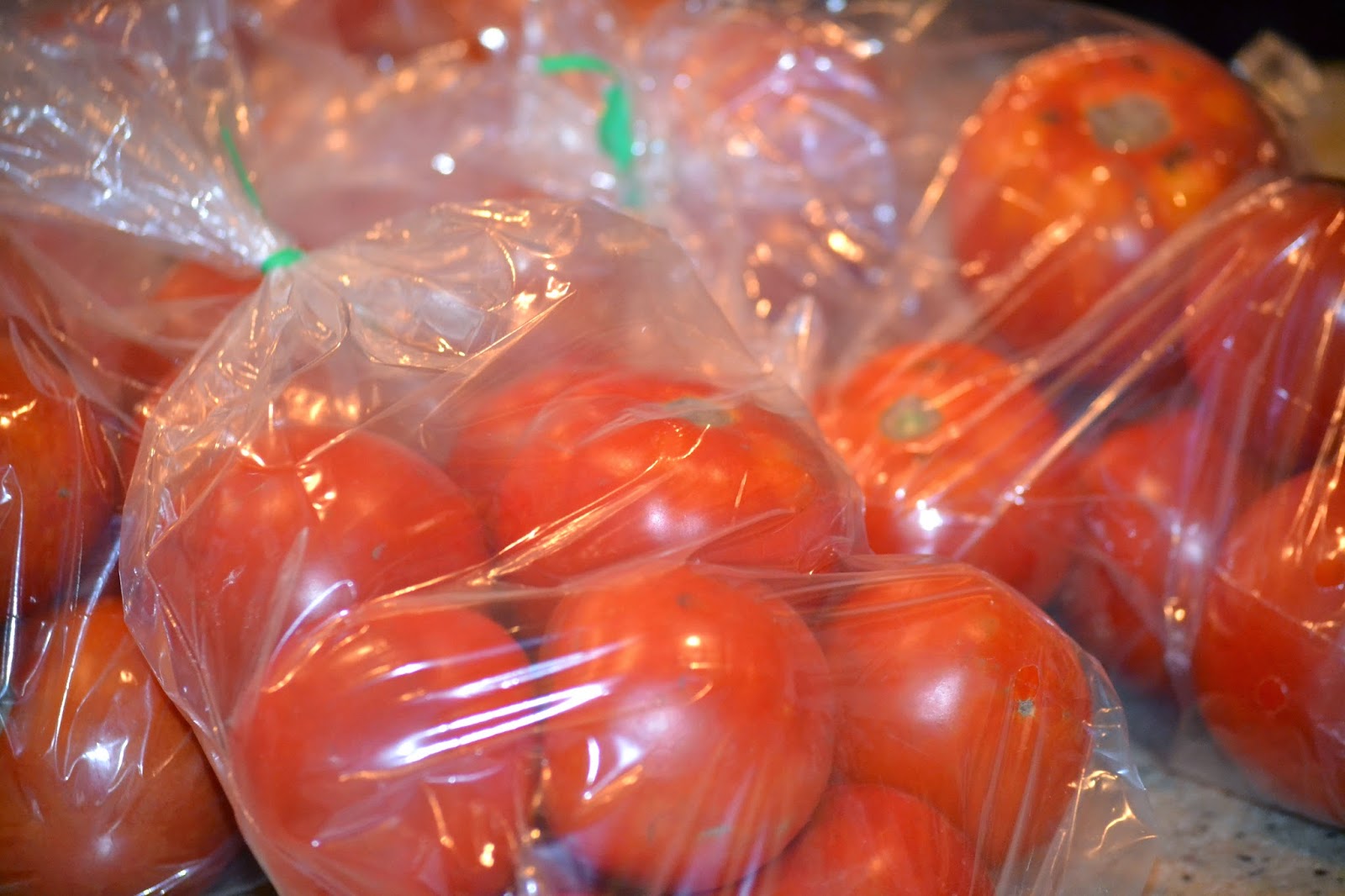 The first step is to blanch or remove the skin from the tomatoes. Now you could sit around and peel those things but it is far easier to blanch.

First score the tomato skin with an X: 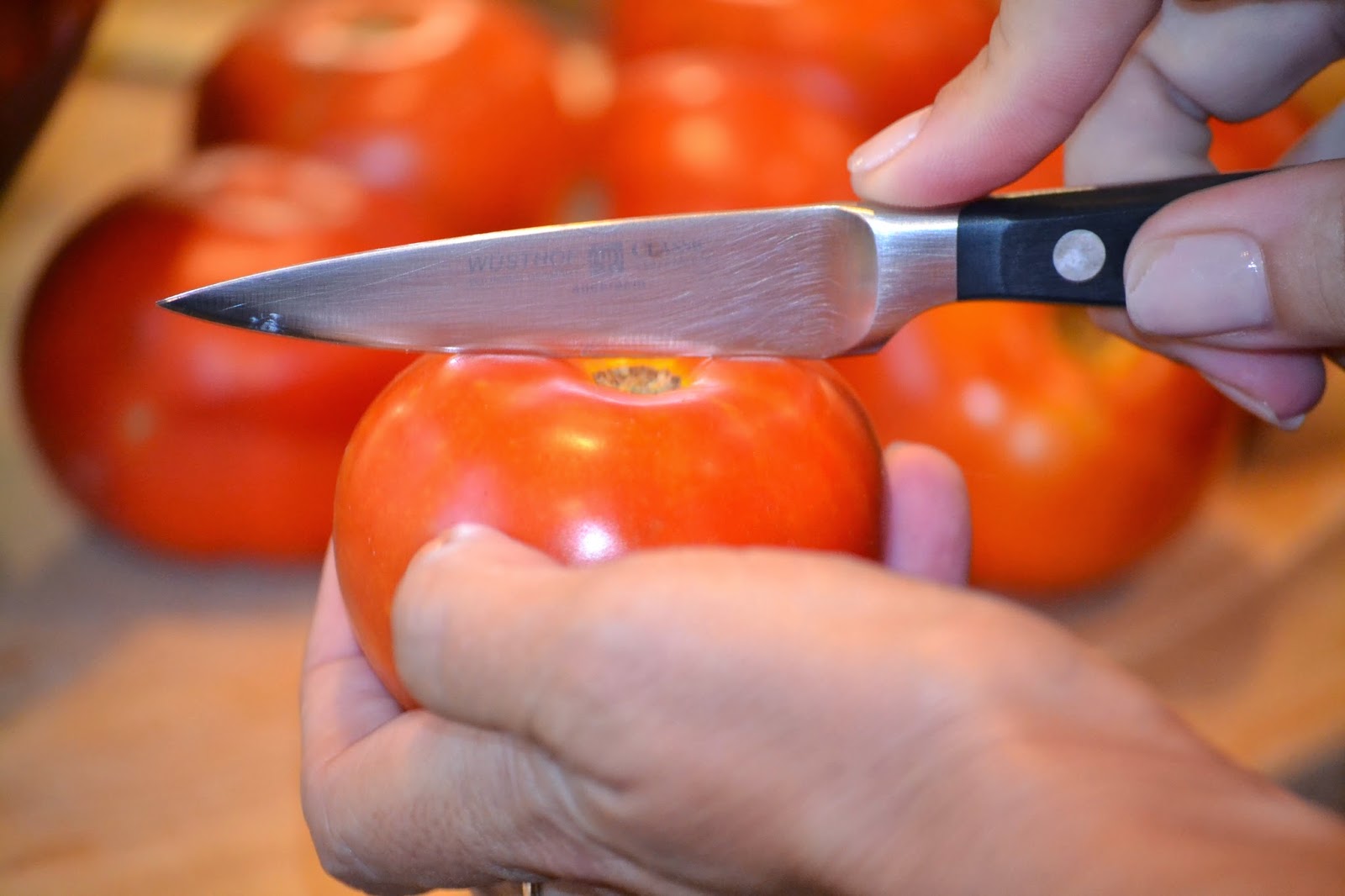 Then prepare a pot of boiling water and a second bowl of ice water: 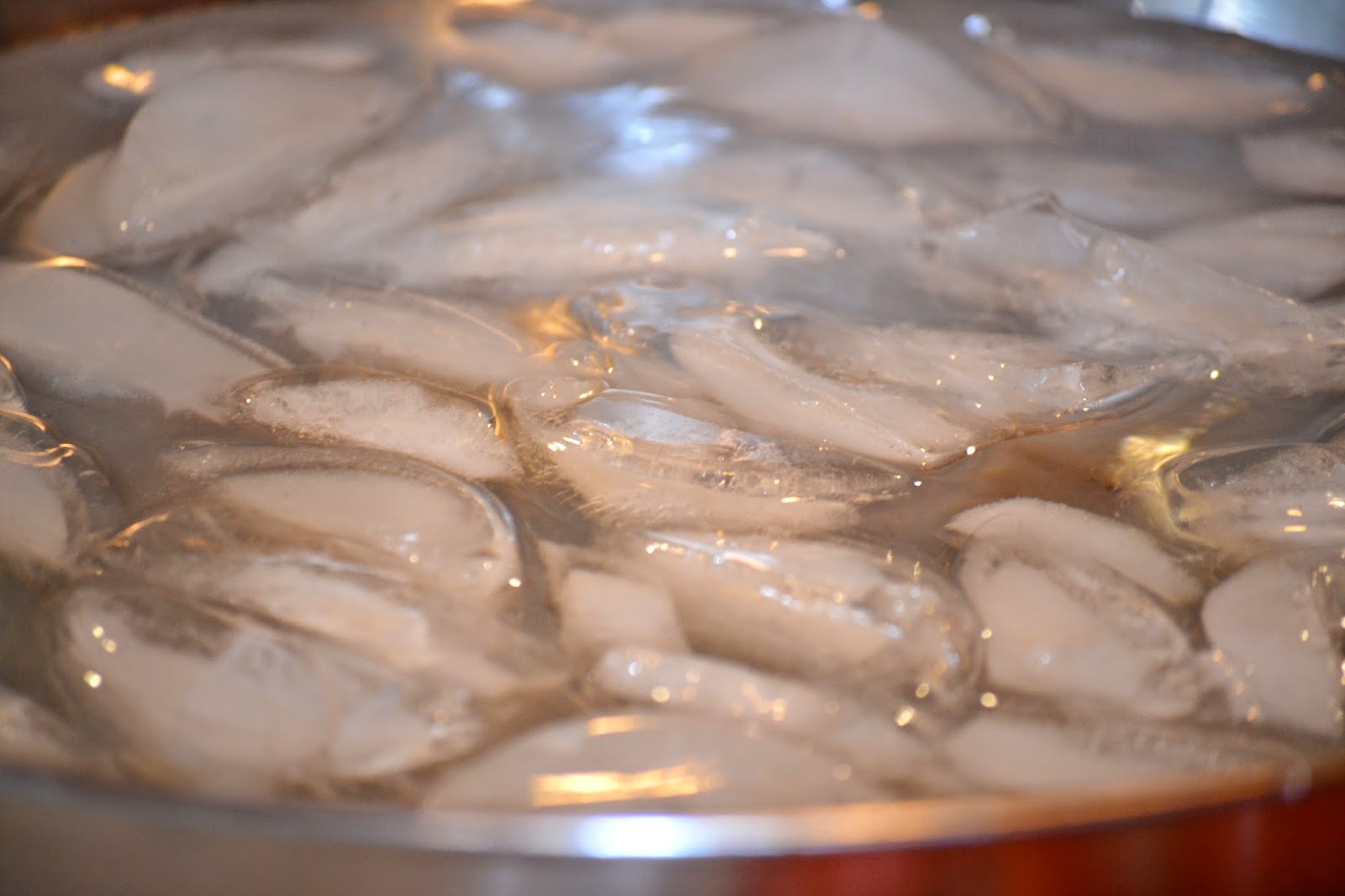 Then place the tomatoes into the boiling water for a few minutes (think 2 minutes) until you can pull them out and the skin is separating. 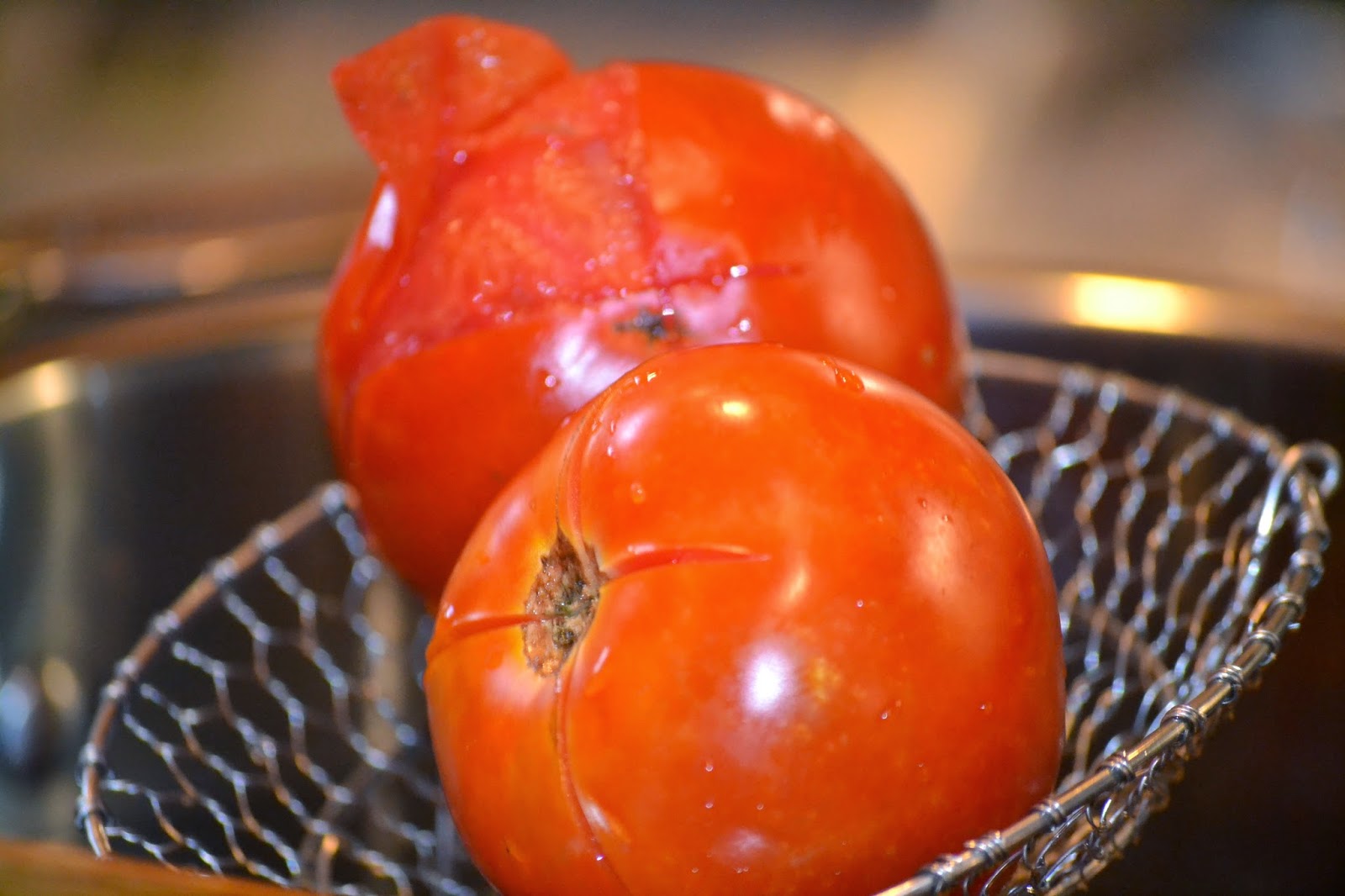 Then place in the cold water bath to cool 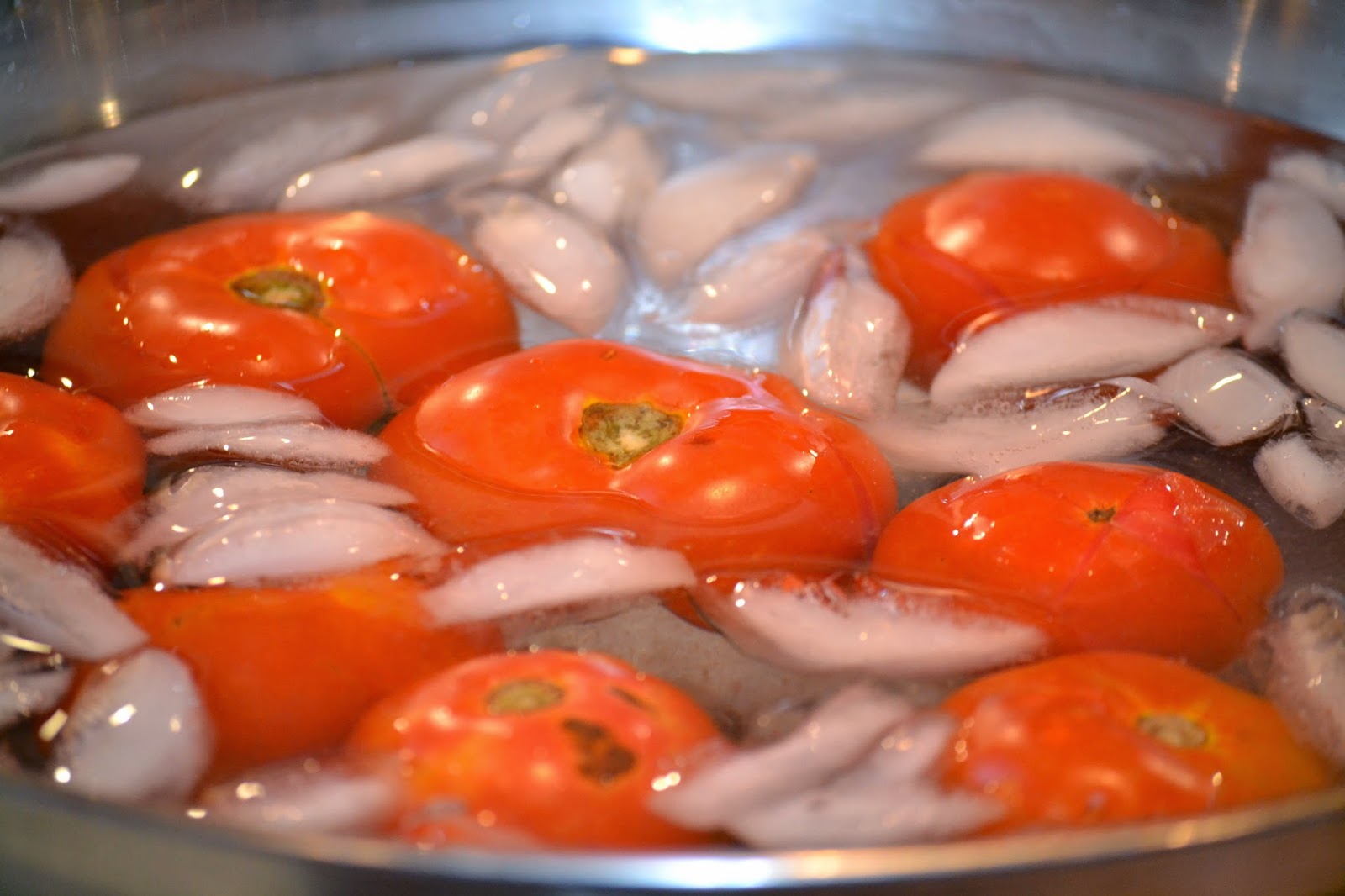 Peel the skins, core the tomatoes and let drain through a colander. 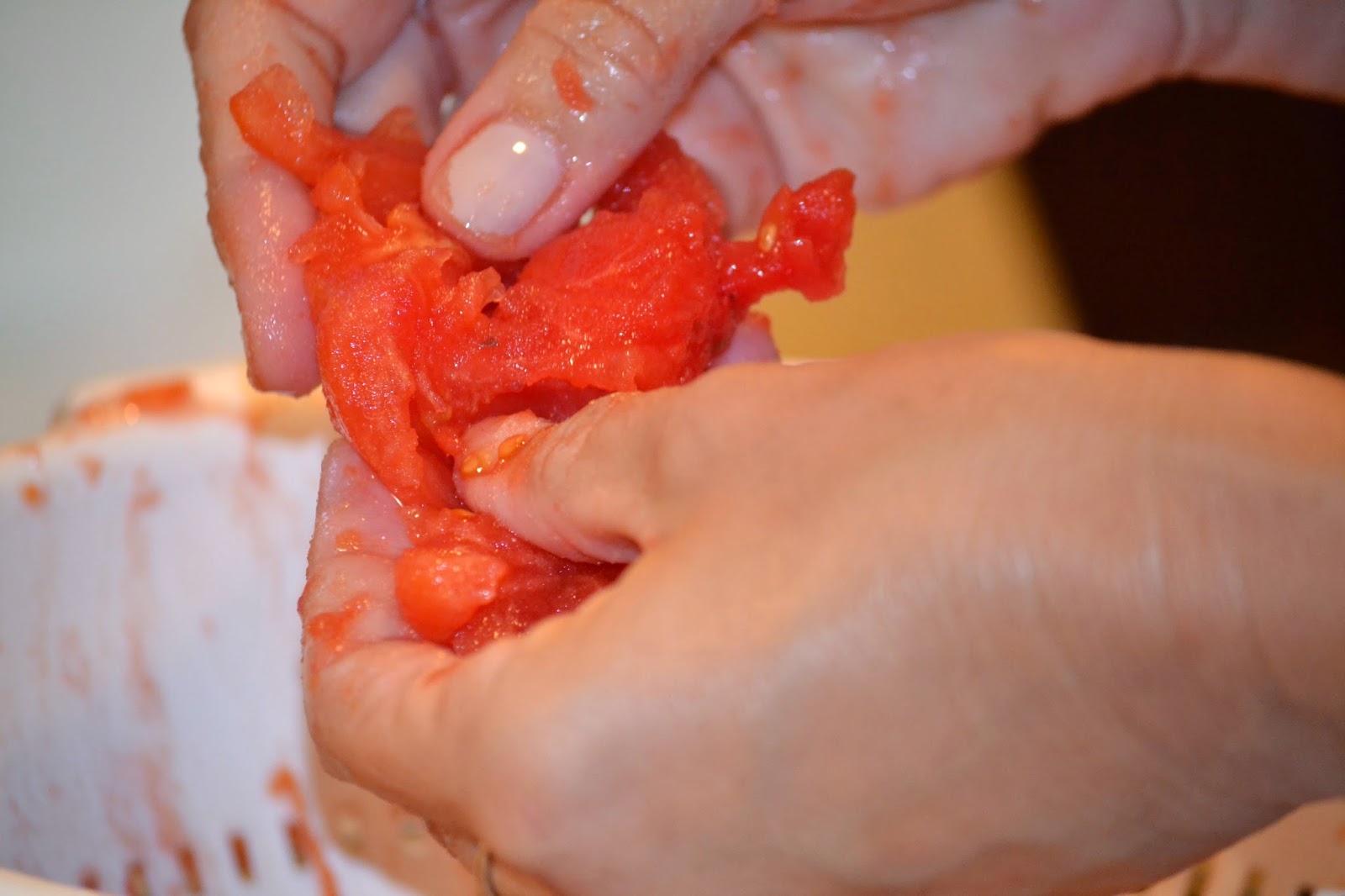 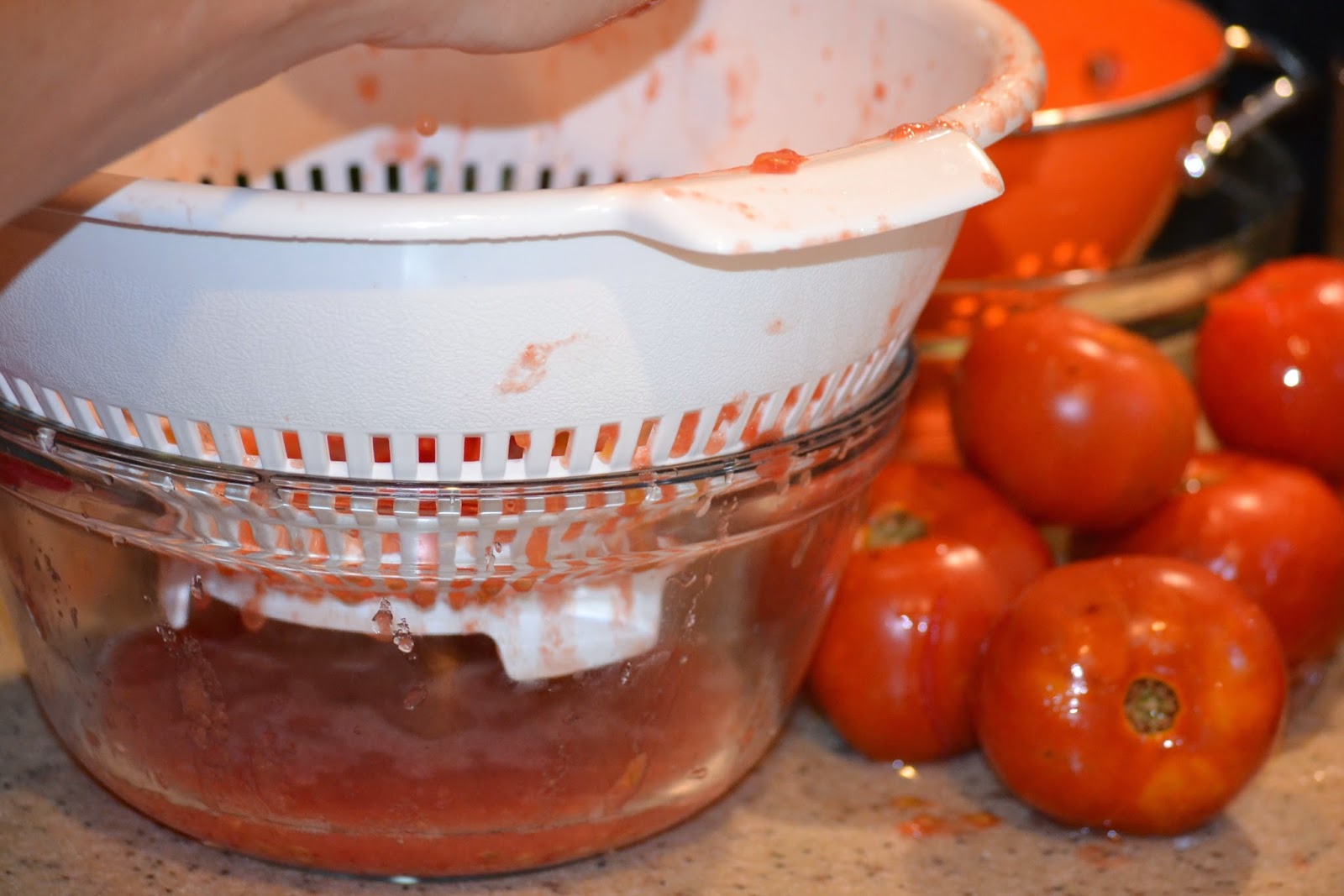 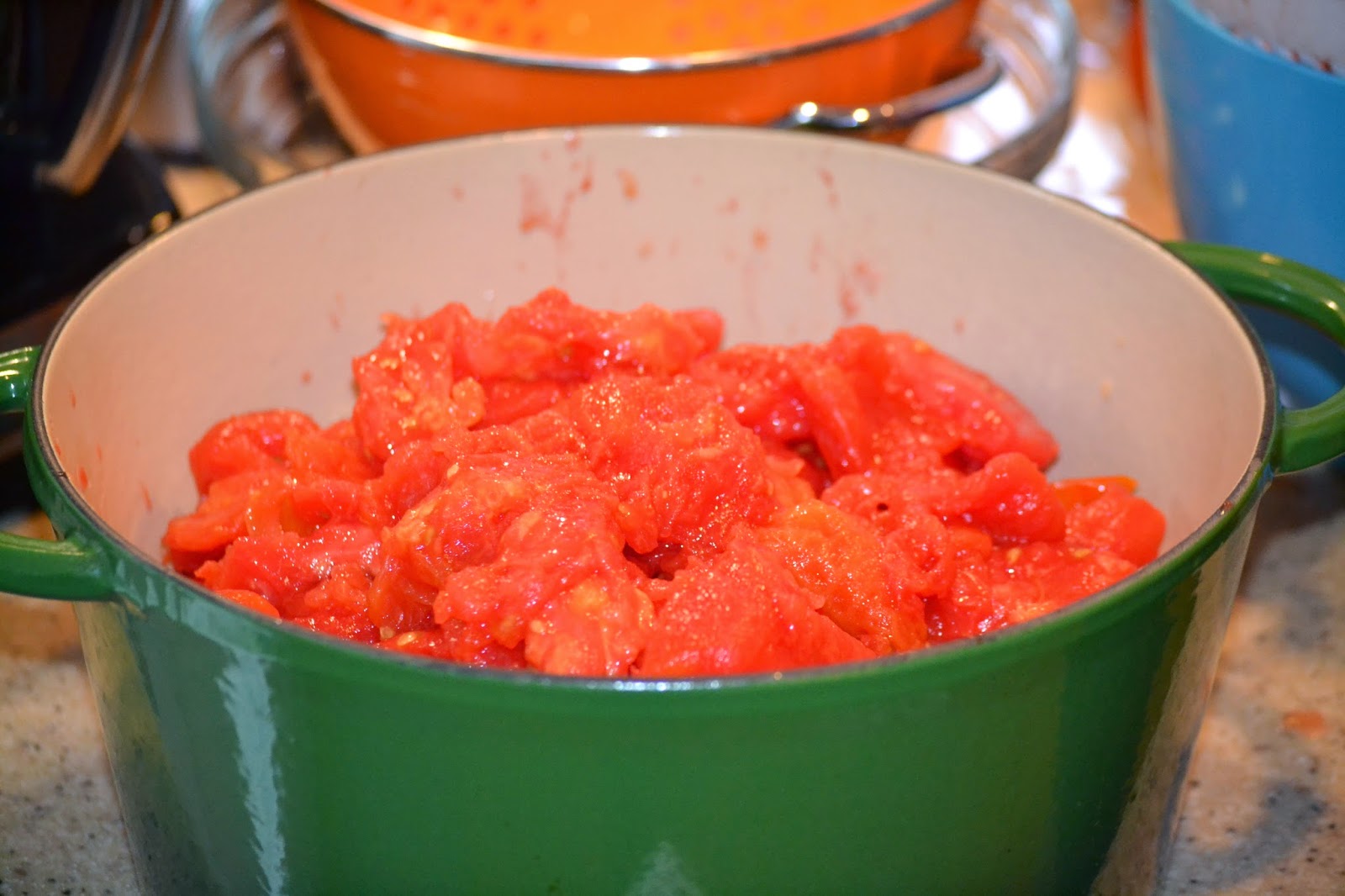 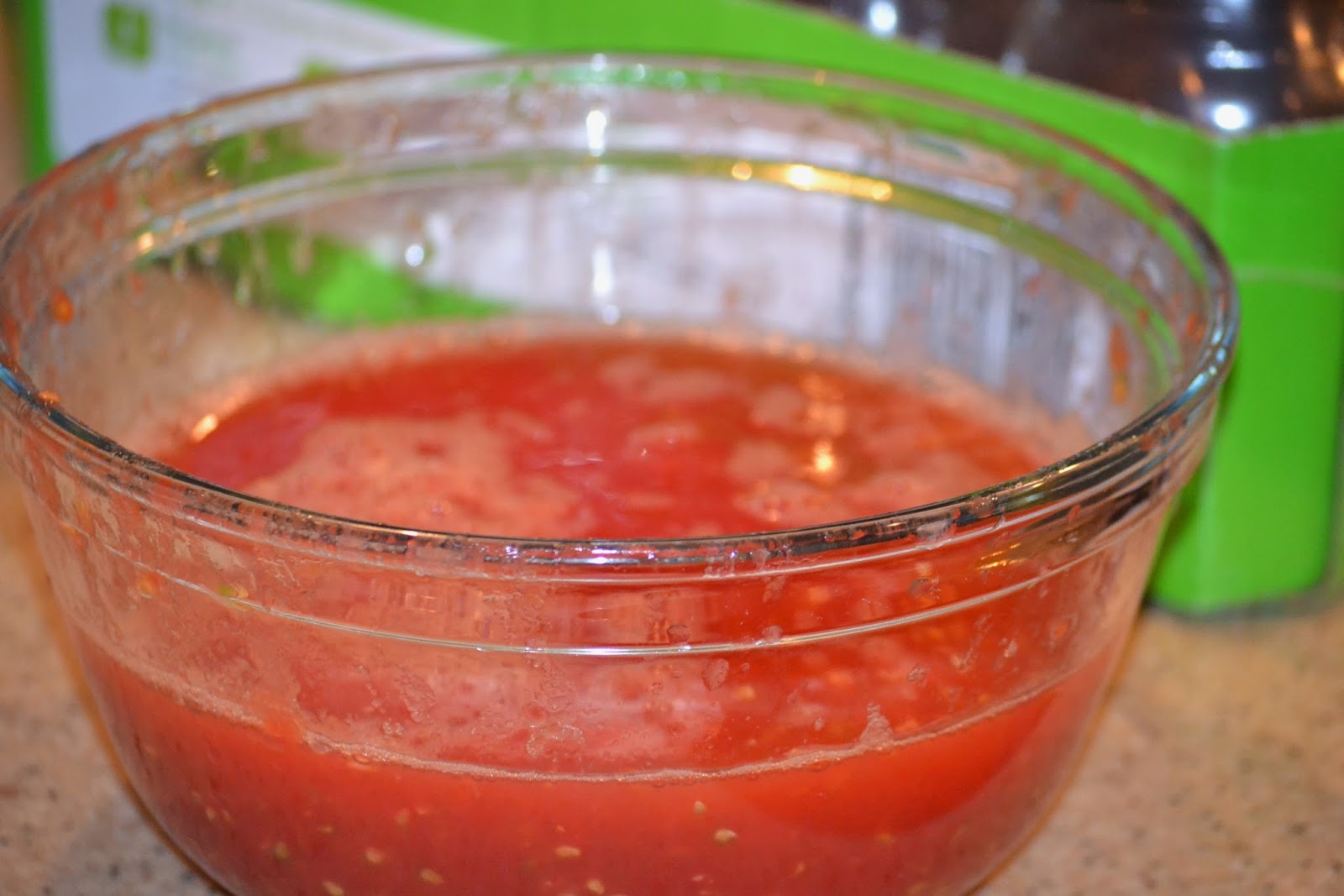 At the end of this process you will have a bunch of crushed tomatoes for canning and a bunch of tomato juice that you can also can.

Boil the tomatoes for 5 minutes then pack in jars with 1/2 teaspoon of salt and 1 tablespoon of lemon juice. 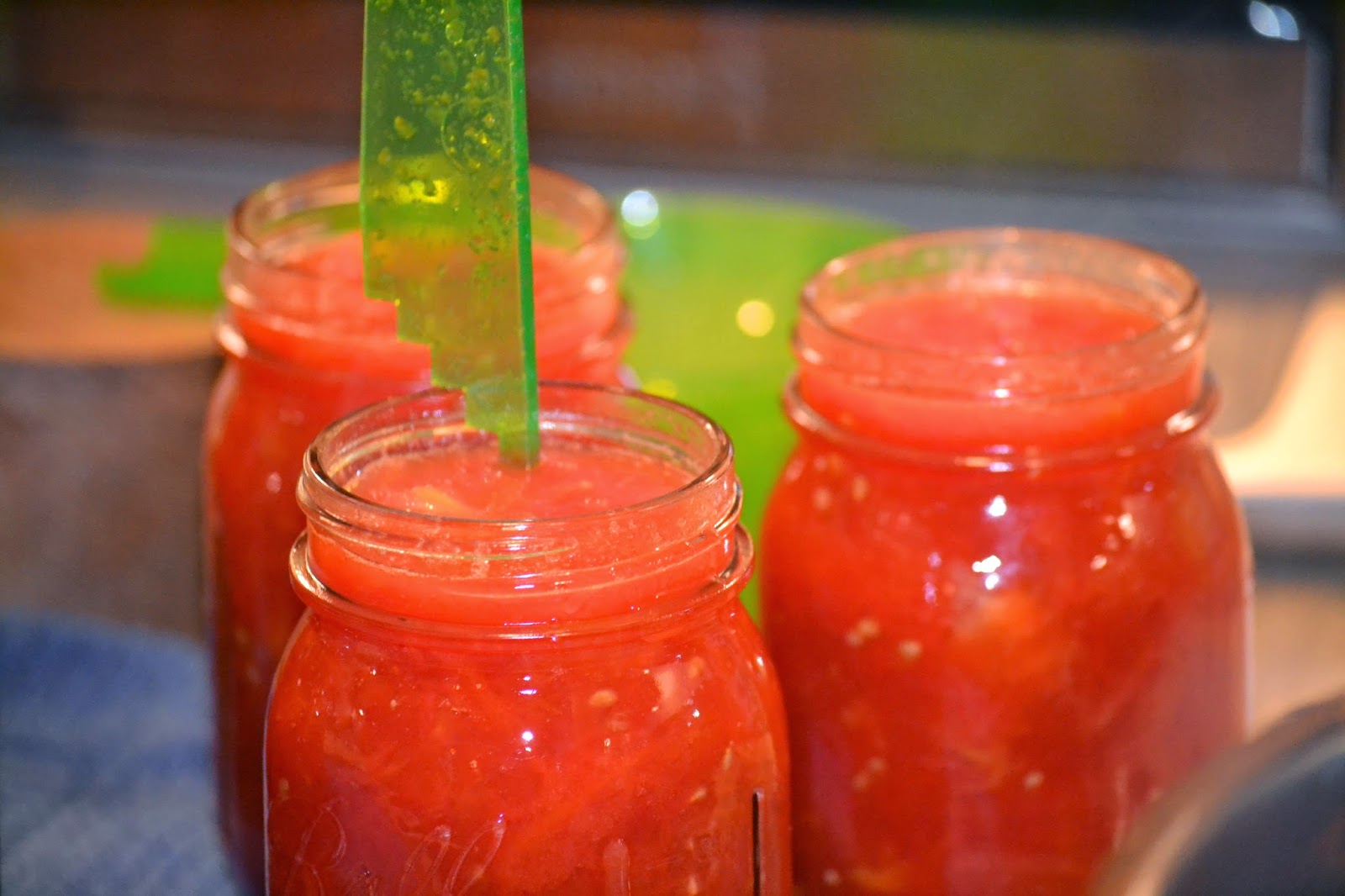 Wipe the top of the jar before placing the lid! 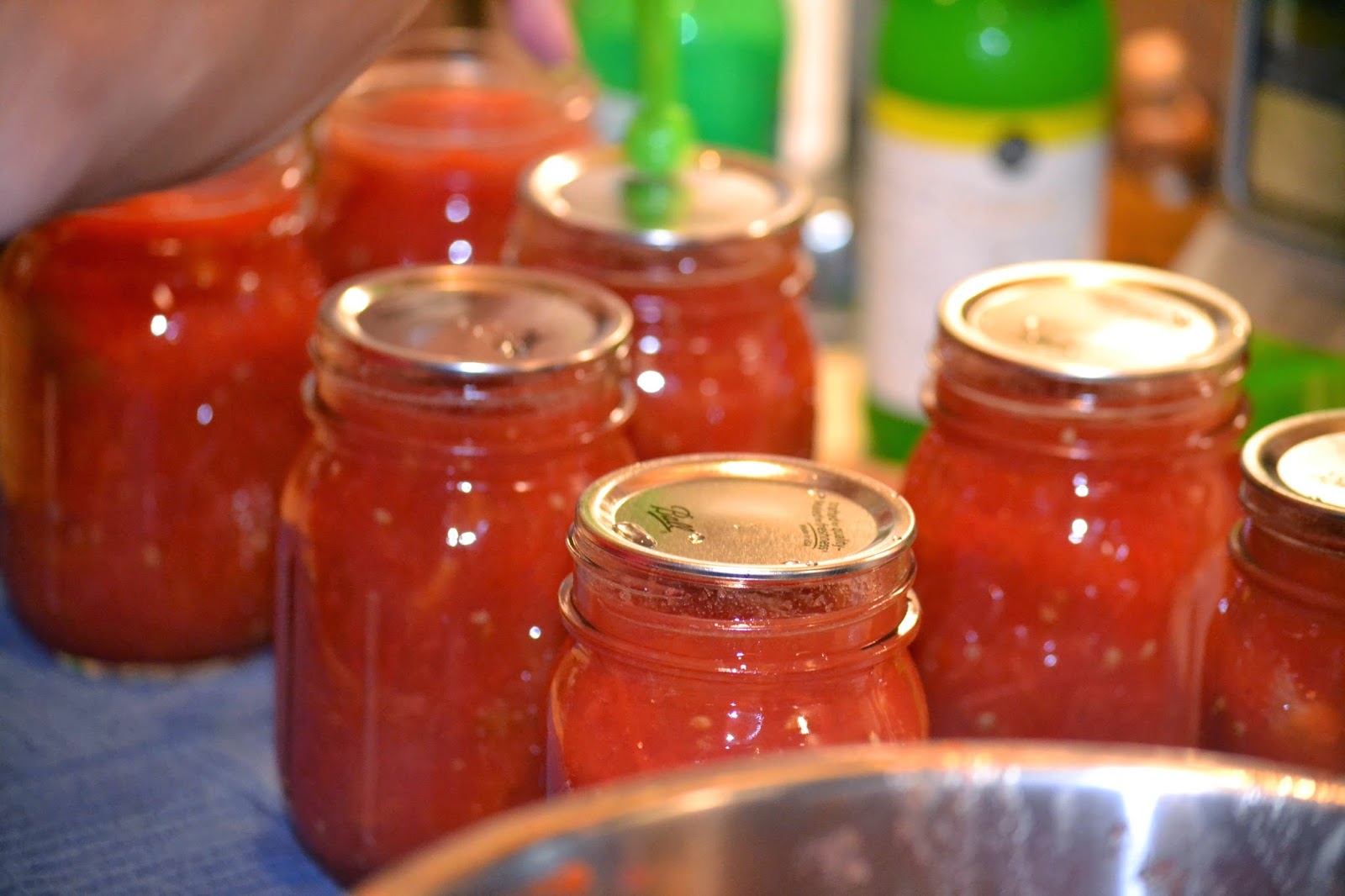 Don't tighten the lid down tight. It should be tight enough to hold the lid in place but not so tight that it might deform the lid and prevent a good seal. Let the pressure change seal the lid, not the tightness of the ring.

Place the jars in a bath of boiling water for 10 minutes.

Then remove to cool. 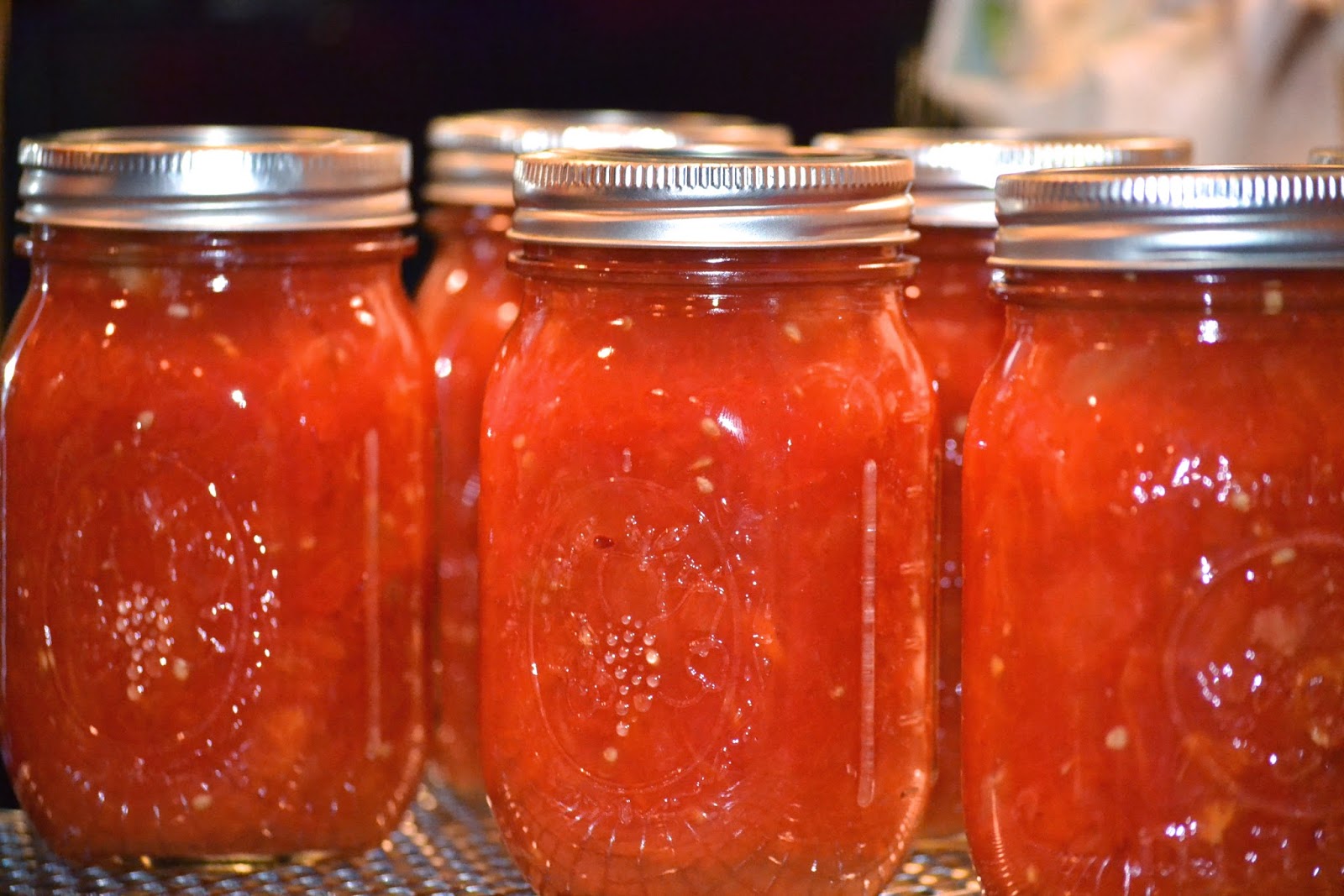 We also preserved the left over tomato juice after straining. Same lemon juice and salt. 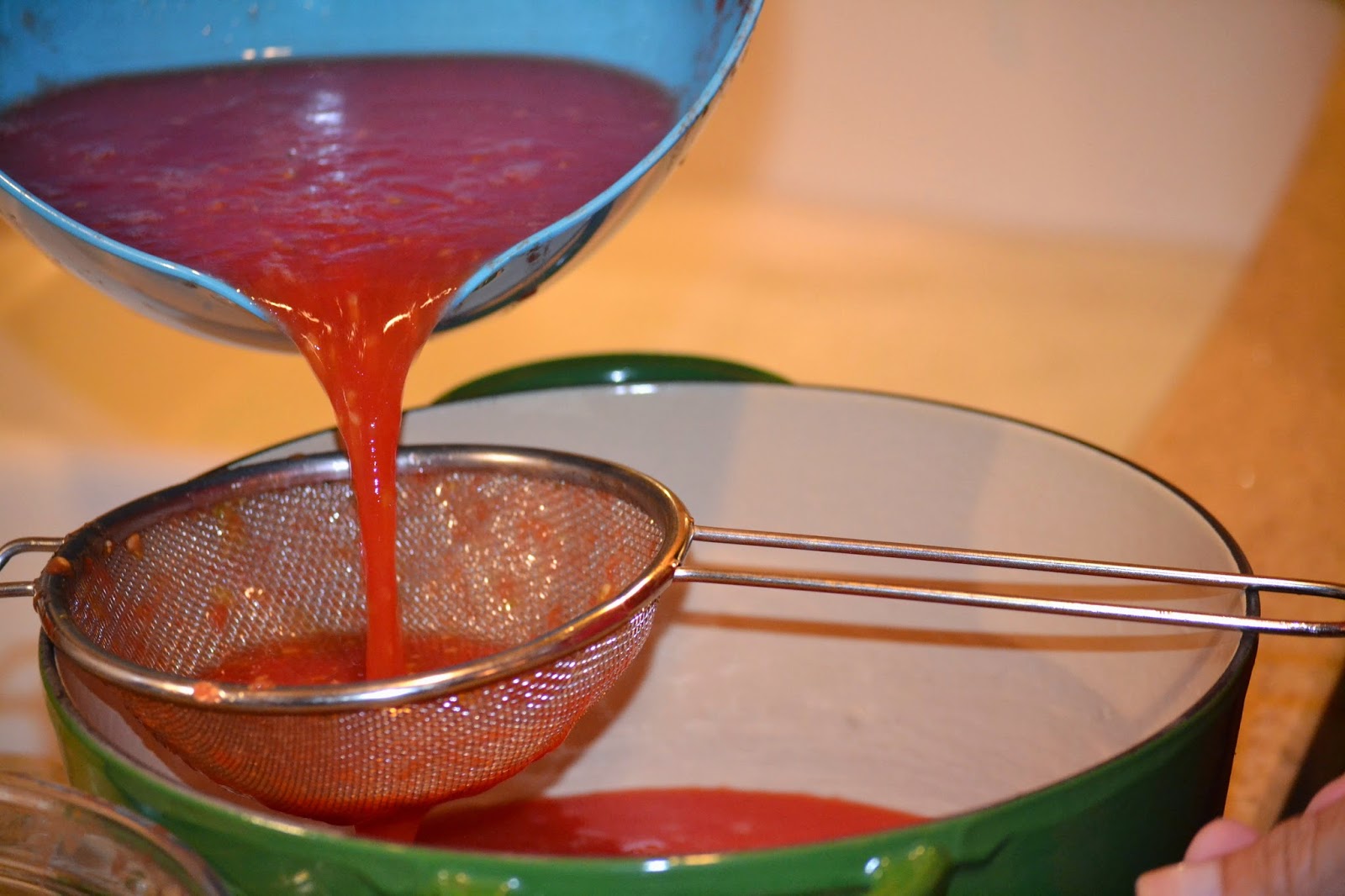 Every seal seated properly. A delightful popping sound coming from the kitchen as they cooled. We will have to wait until winter for the verdict but we expect to make plenty of soups and marinara sauce from our home grown tomatoes this winter.

Posted by zdlatham at 9:36 AM
Email ThisBlogThis!Share to TwitterShare to FacebookShare to Pinterest