Prime Rib and Au Jus on the Big Green Egg 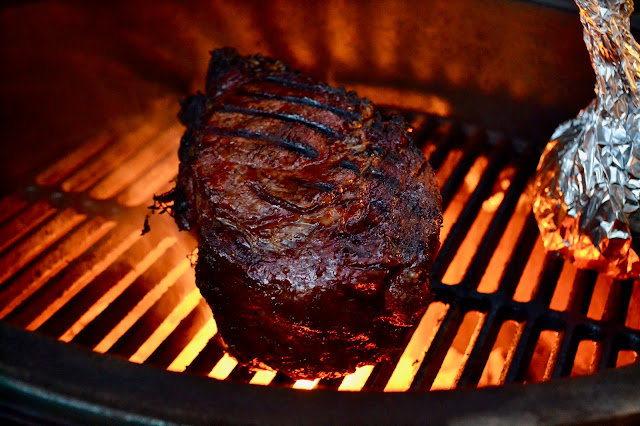 Distractions aside. We made our way to the meat counter where I find myself surveying the "USDA Prime" meat selections. After a little salesmanship and calculating I convinced my bride that a 17-pound slab of prime grade boneless whole ribeye was a great buy, anticipating cutting it up into several 1-pound steaks and two 4-pound pieces to make a prime rib.

I had to do a bit of Googling to determine if this was in fact the correct cut and determined that it sort of is. A traditional prime rib is cooked bone in and then trimmed. My cut is boneless but it is the same cut. So... close enough for government work.

Also, do not be fooled by the title "Prime Rib."  The "prime" in the prime rib has nothing to do with the USDA grade that is affixed to the meat. Mine happened to be USDA Prime but it could have been USDA Choice and it would still be a "Prime Rib."

After slicing my slab up into 9 thick one-pound steaks (double servings), I also carved out 2 four-pound roasts for prime rib. 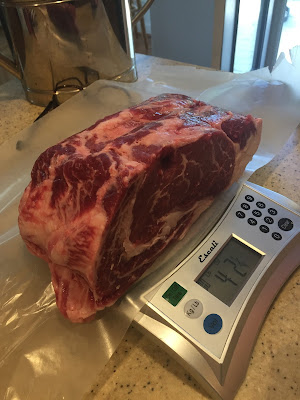 Au Jus:
We used Bobby Flay's recipe for Au Jus
Collected pan drippings (collected using an iron skillet in the egg)
1-1/3 cups of red wine to the drippings and scrape with a wood spoon - cook to reduce
2-2/3 cups of beef stock - reduce by half
whisk in thyme and salt and pepper to taste

Going to try and talk Julie into making Yorkshire Pudding. If I do, we will do that as a separate post. 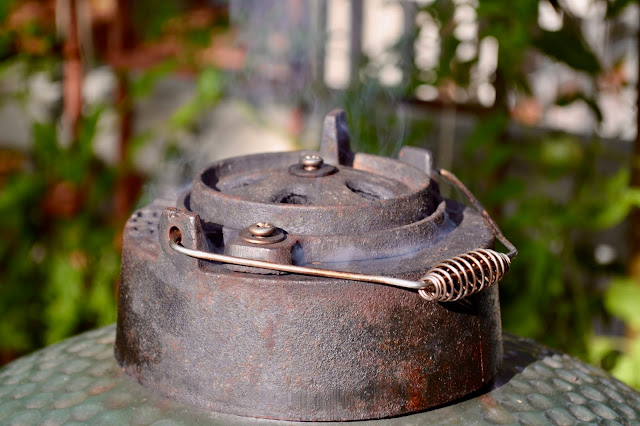 Set the roast on the counter and added salt and pepper and a dash of cayenne. Let the steaks warm up just a little. About an hour before cooking. For best results, throughly thawed and temperature consistent throughout. 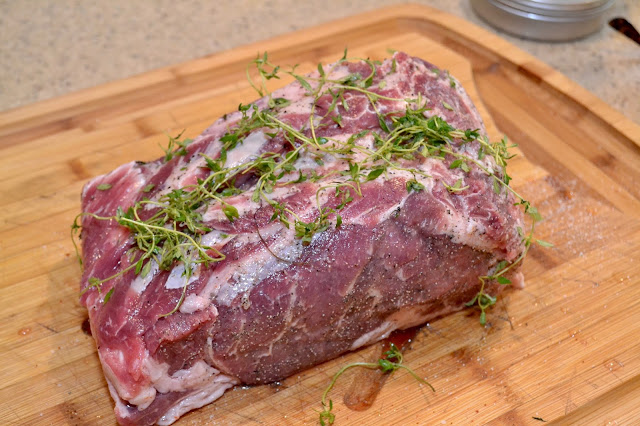 Started heating the egg at 6pm. Plate setter in, egg temperature 375 (Should be more like 300 next time) degrees. Going to add a second tier to the egg for the roast so I can use the lower level to place the skillet to catch the roast drippings. Need those for the Au Jus. 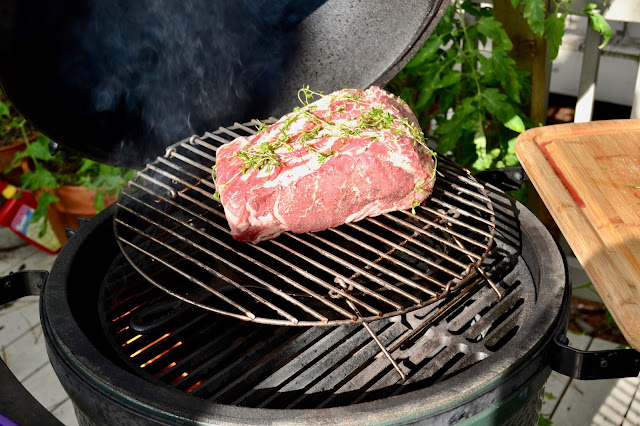 Cook roast until the interior temp is about 110 degrees. Normally I would cook it less and use the sear stage to raise the temp a little more but with such a large hunk the searing won't really affect the interior center temp and we will have some carryover. 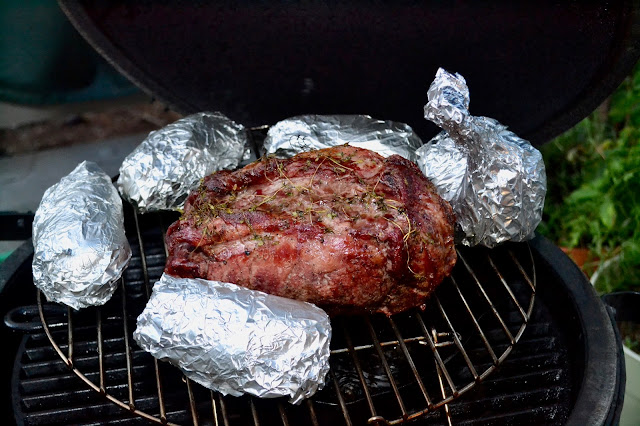 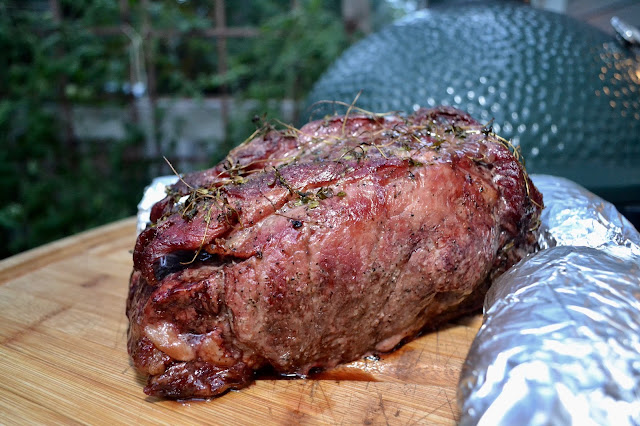 Take the plate setter out and run the egg temperature up to 600 degrees.

2 minutes each side. Nice Char. 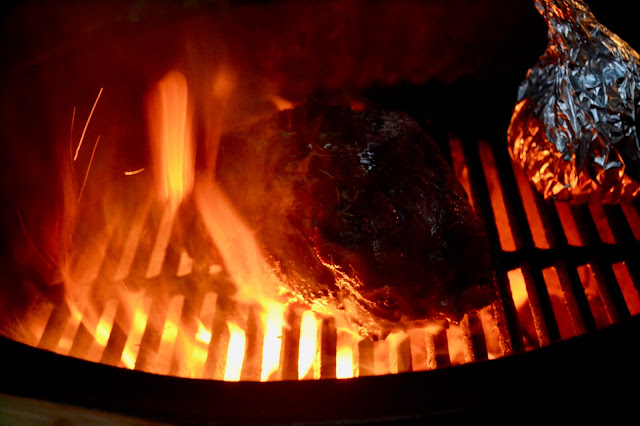 Remove and let it rest for 10-15 minutes 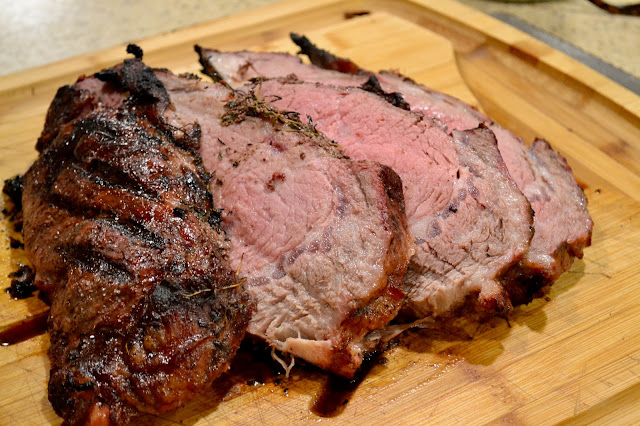 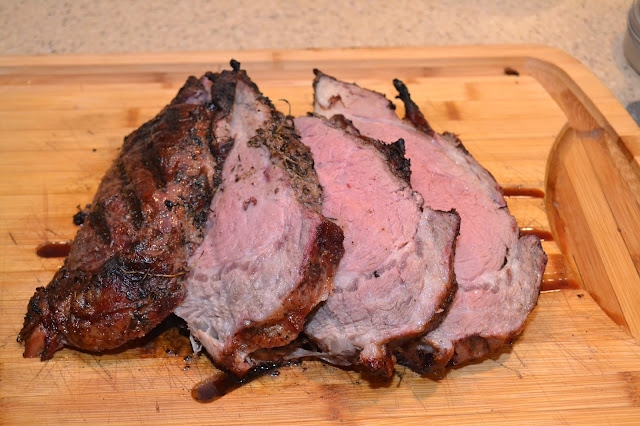 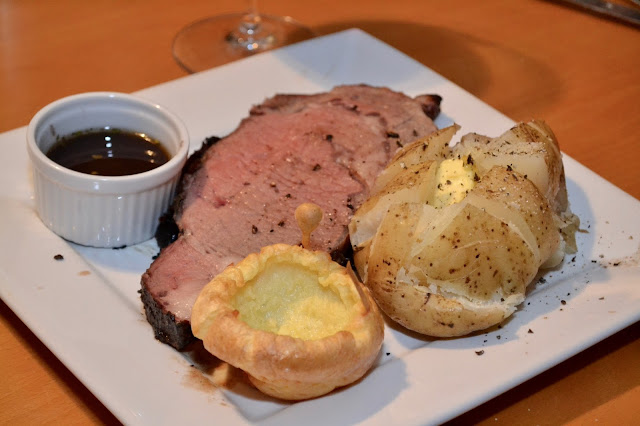 
Two mistakes here. First, I overcooked it a little. Should have roasted it at 300 or a little lower until 110 interior, and second the exterior was a little bitter with too much smoke and char. Need to dial that down a little next time.

And it was another priceless evening spent with the young men - they are now 13 and 18 so I'm afraid our weekends of cooking together are going to be less often. Take advantage of the time.

So apparently Thermoworks doesn't sell through Amazon anymore. You must buy direct. Still the thermometer to have. Go here and order direct. unfortunately, we don't get a dime for this but still, it is one you want.

Posted by zdlatham at 9:39 AM
Email ThisBlogThis!Share to TwitterShare to FacebookShare to Pinterest