Every year I partipate in an office Christmas cook-off that we affectionately refer to as the "12 Pounds of Christmas." Each person must prepare a homemade dessert and bring it to work for everyone in the contest to share. At the end of the 12 days we vote on the winning dessert, and the victor is presented with the trophy, a major award, that they then proudly display at their workstation for the year. Obviously it is a big deal. 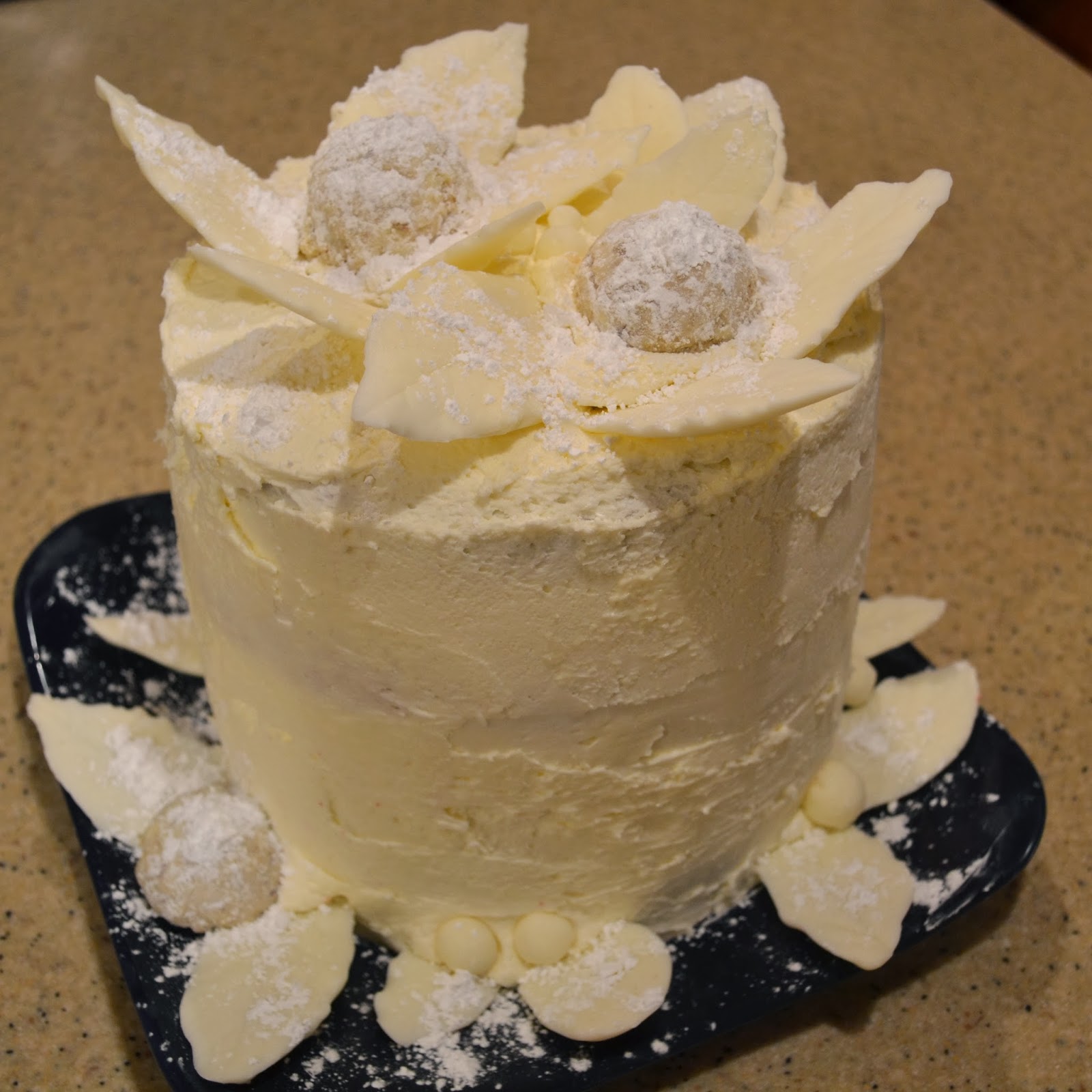 Below is a step-by-step process in support of my campaign for the 2013 office trophy.

Go purchase the 2013 Southern Living magazine and follow the directions. Seems simple? It was a lot of work...

Gather the ingredients as listed in the recipe and prepare a plan to make the cake while working around business travel that cropped up and impacted my original plan.

Mondays are for garnish. So I decided to make the white candy leaves a few days ahead of time.

Turned out to be simple.

I melted the white candy (purchased in the baking section of the local Kroger). I followed the directions on the candy for melting in the microwave. It took about 2 minutes of total time -- 30 seconds at a time, stirring between each 30-second interval.

Using a spoon, spread the candy coating gently onto the bay leaves and let them cool. 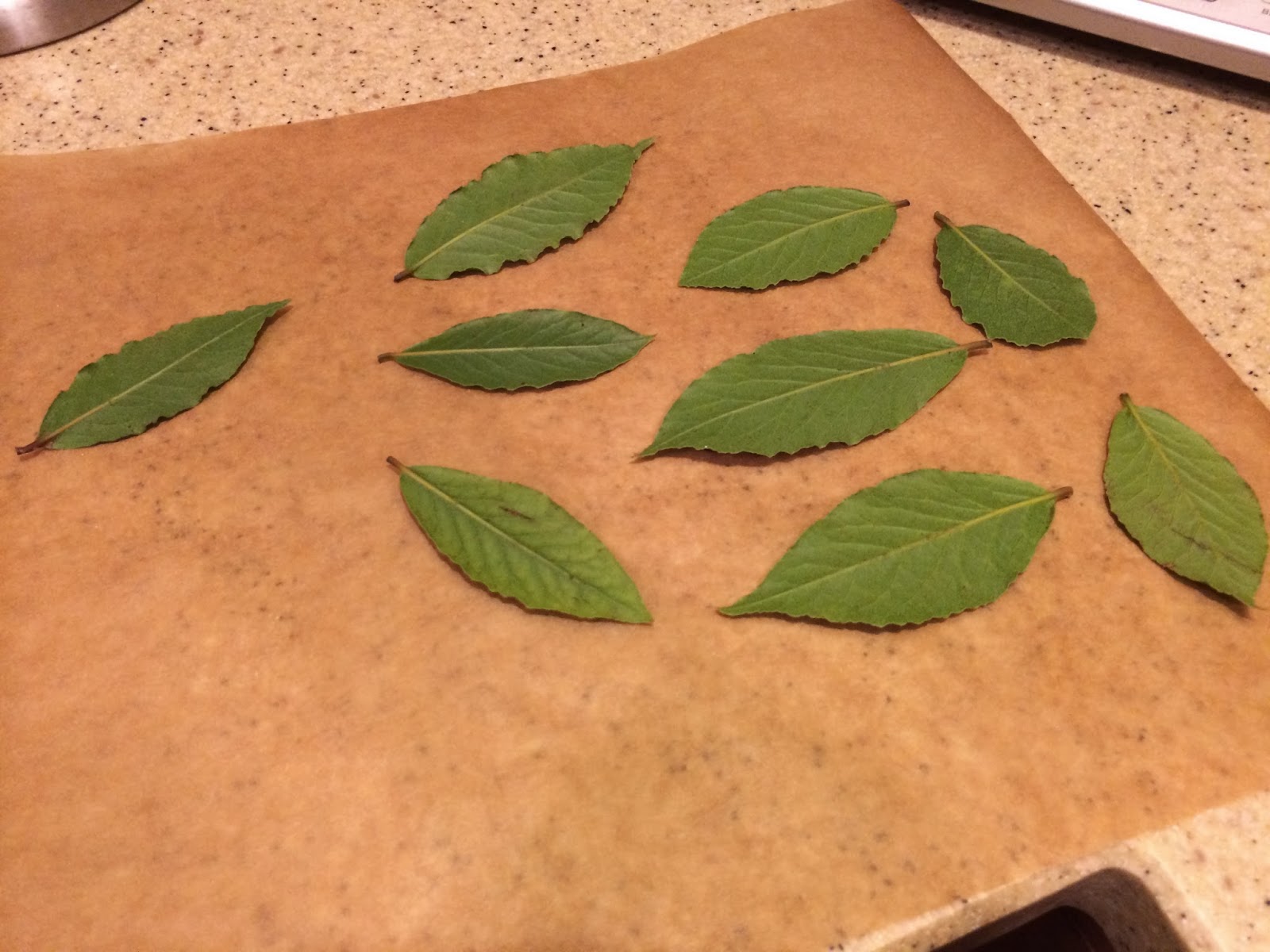 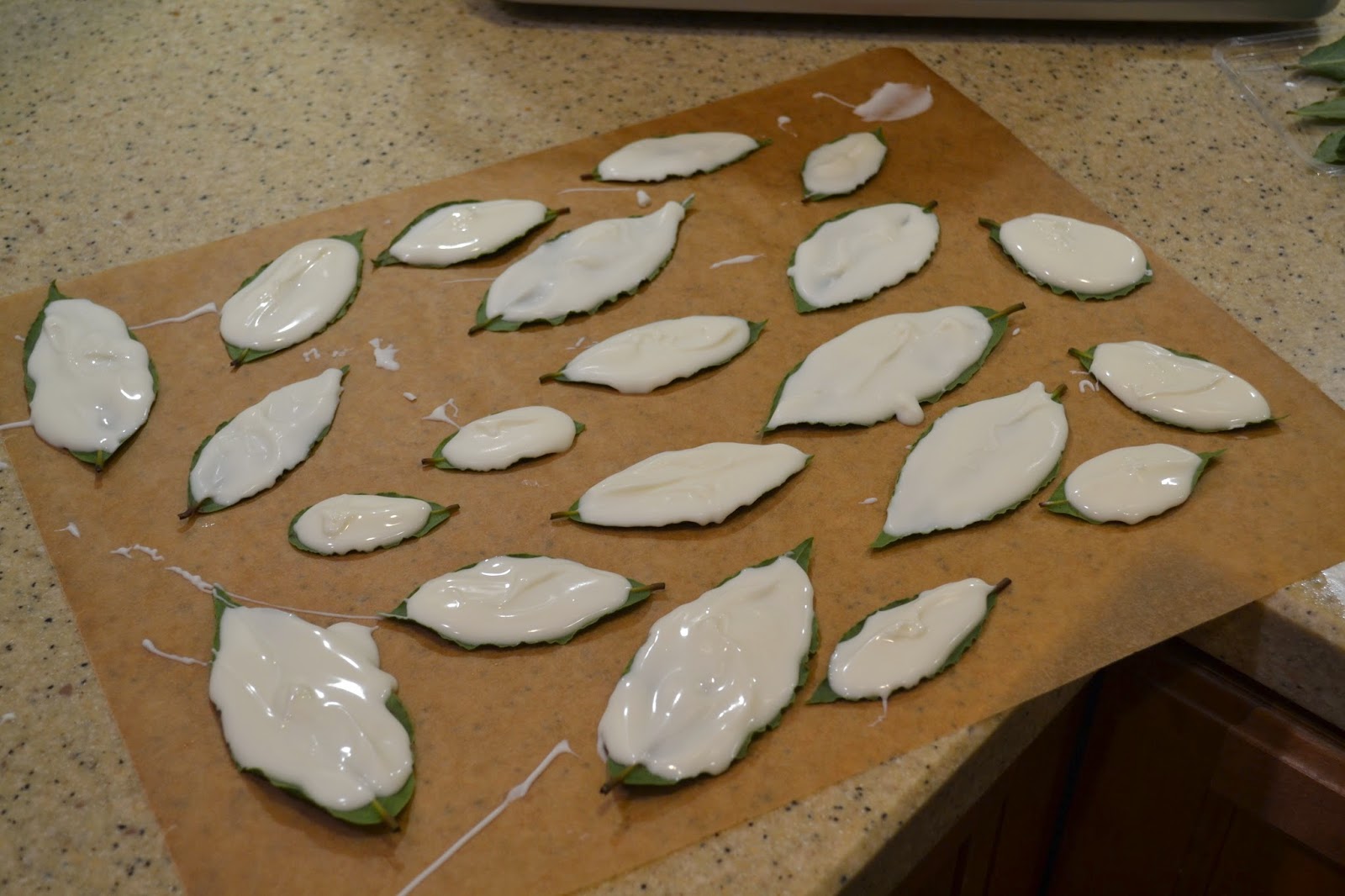 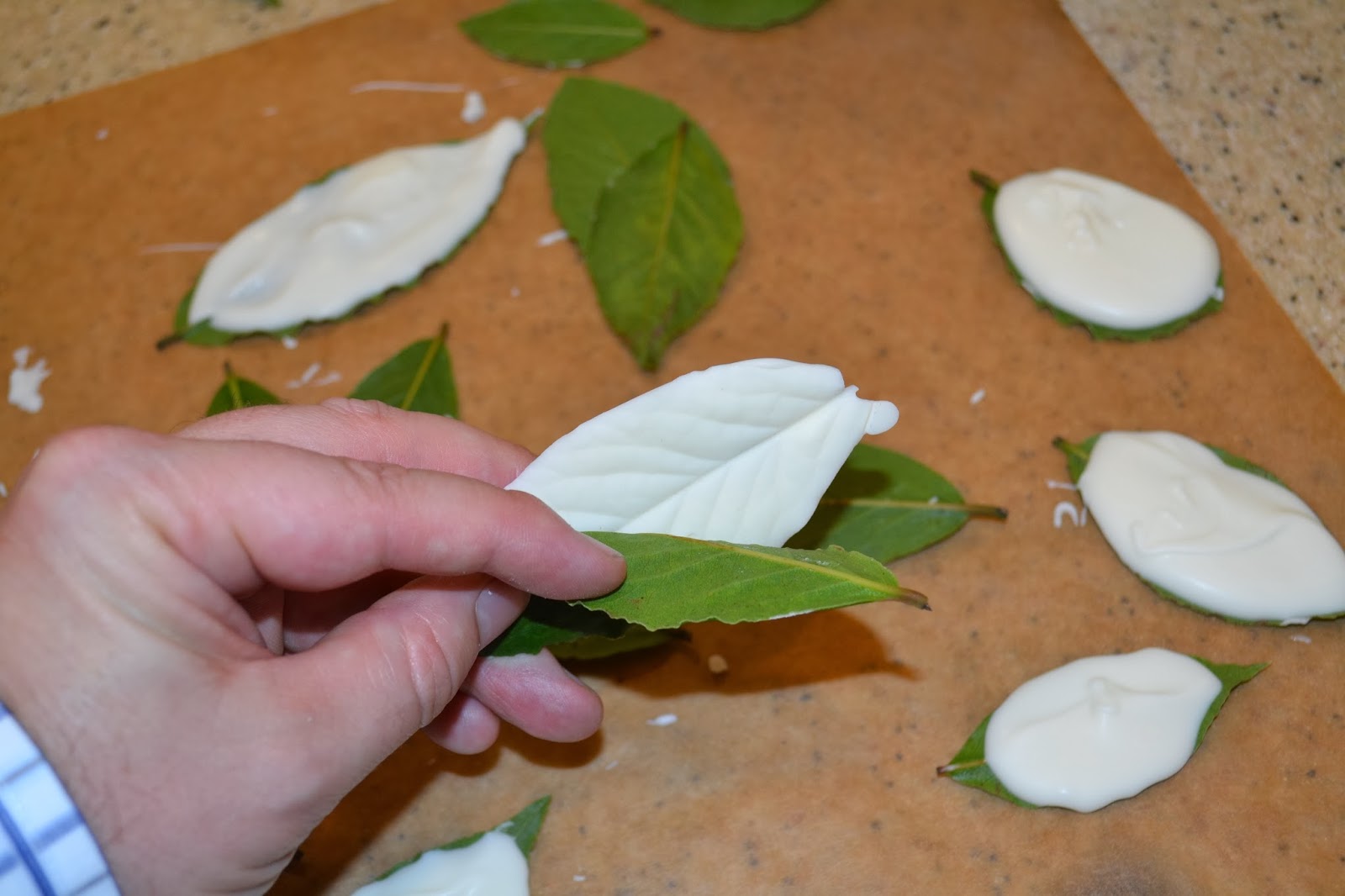 Once they cooled all I had to do was simply pull the leaf off the candy. It separated easily and looked amazing. Probably took about 30 minutes.

Tonight it is cheesecake.

I preheated the oven to 300 degrees.

Diced up the cream cheese to allow it to soften. 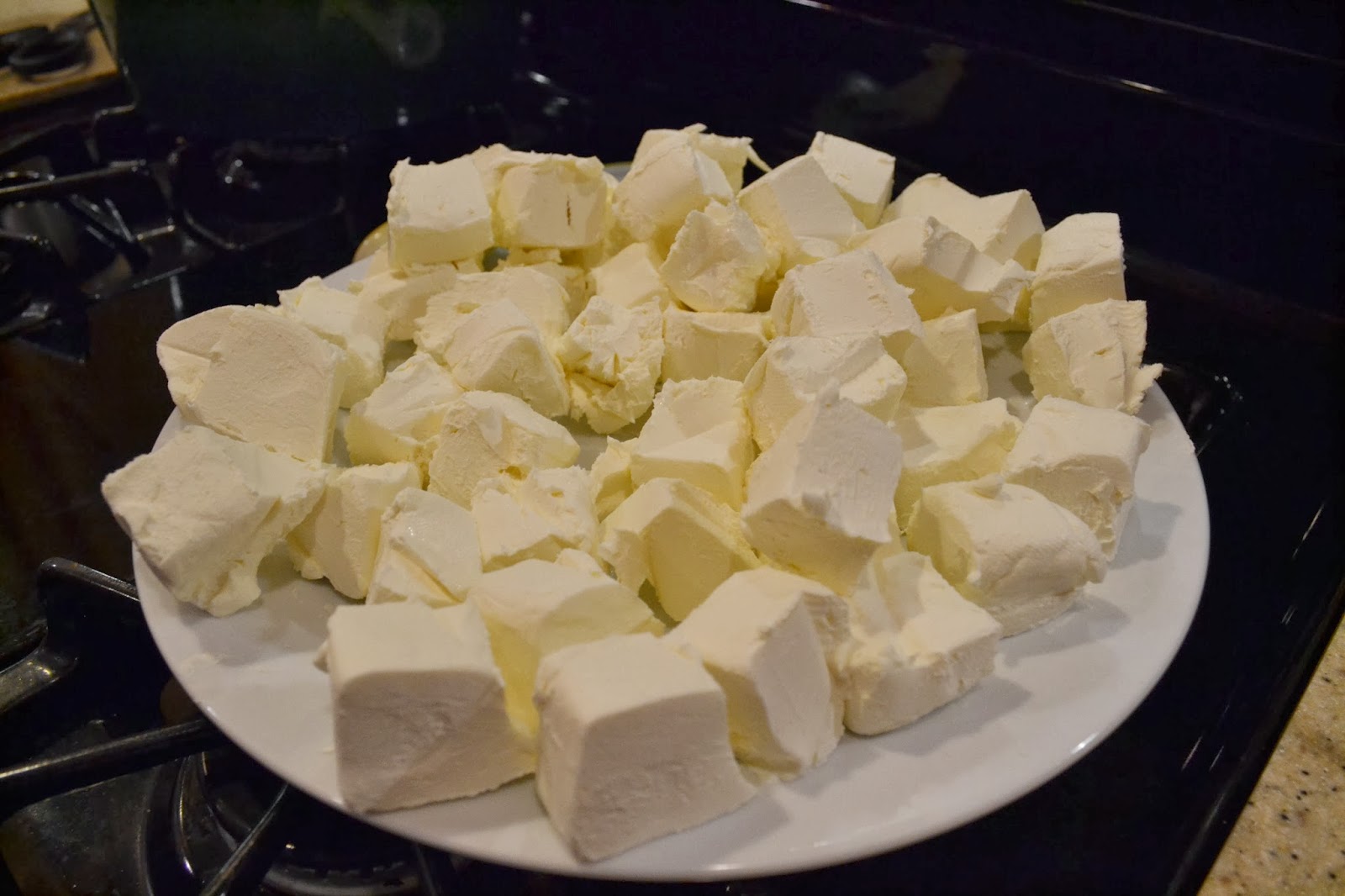 The recipe called to line 2-8" pans with aluminum foil. Not sure why I need to do this?  But it becomes clear later when it is easy to pull the chilled cheesecake out of the pans with little effort. 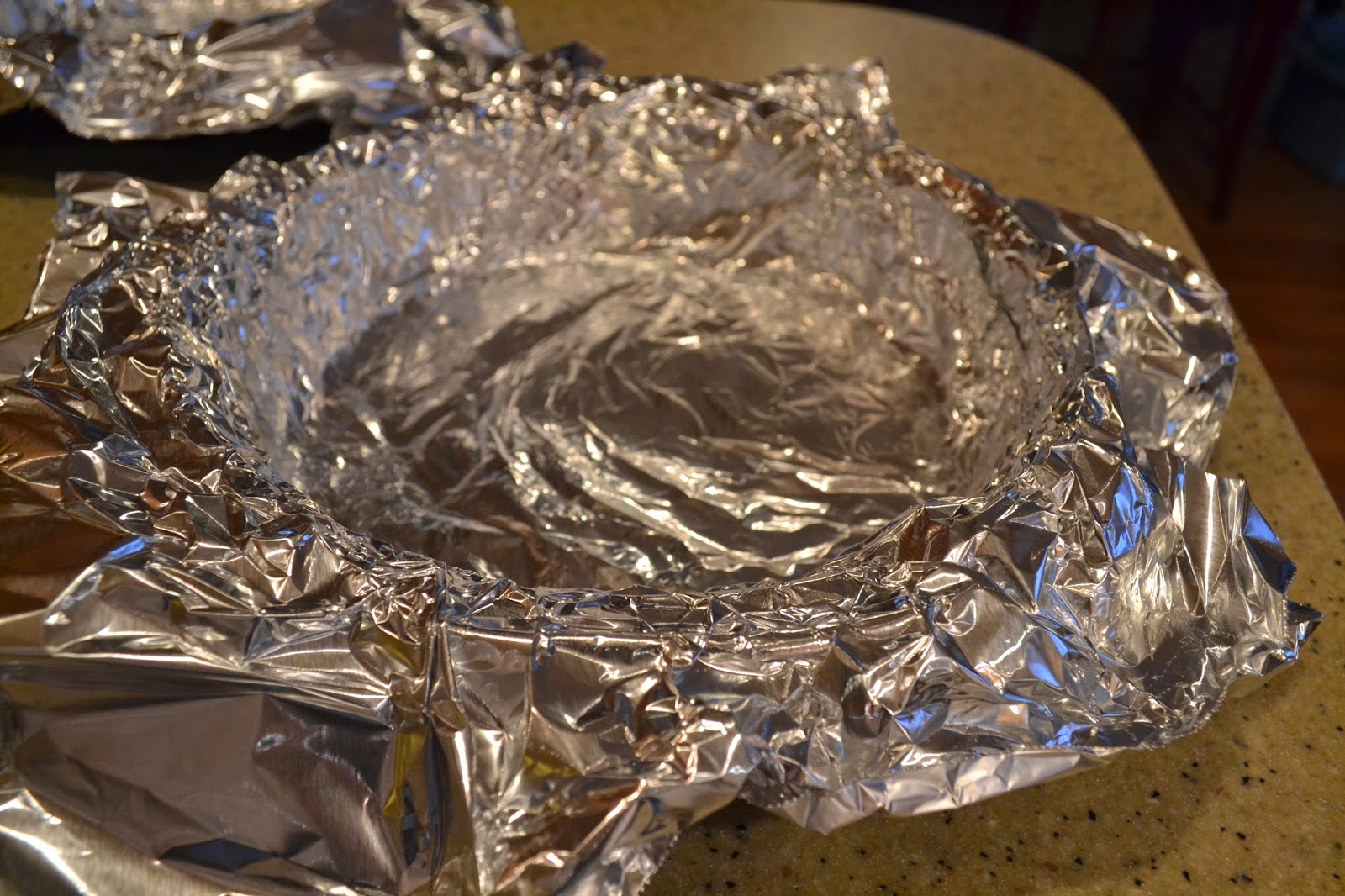 I mean you probably should pour a glass of wine or two to help keep you calm and level-headed. 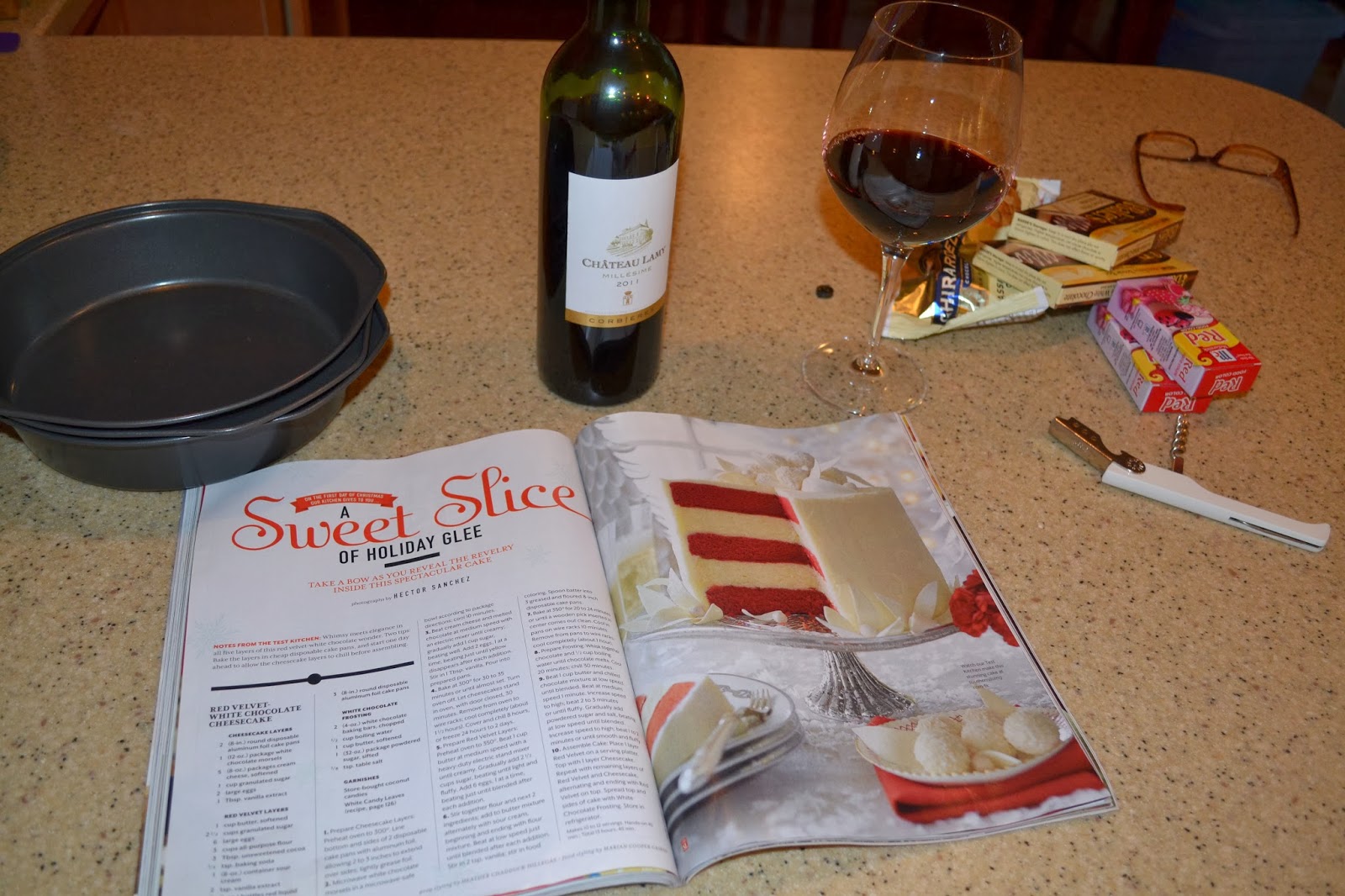 Microwave the chocolate chunks until creamy and smooth. 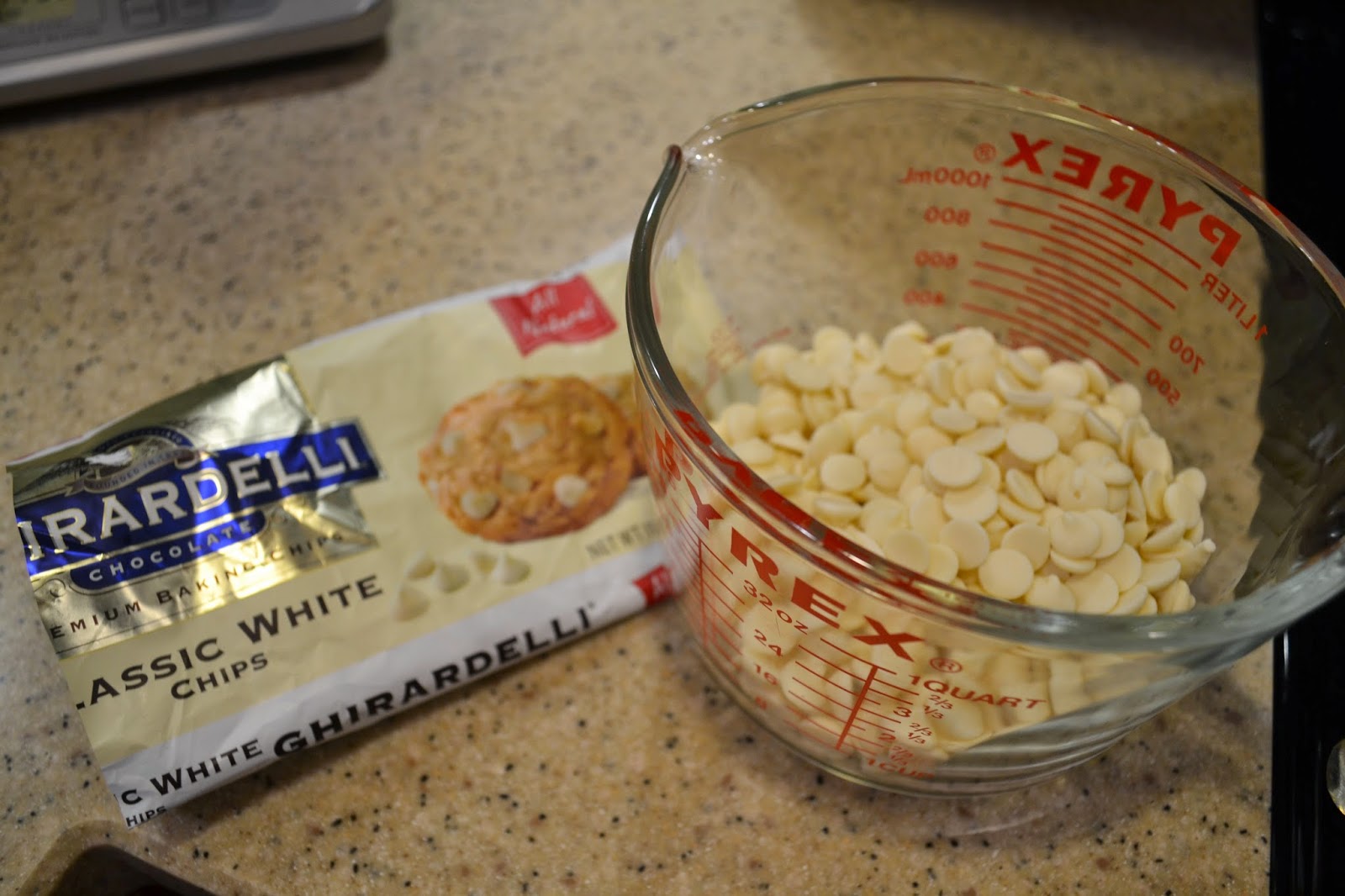 Took about a minute or two in the microwave. 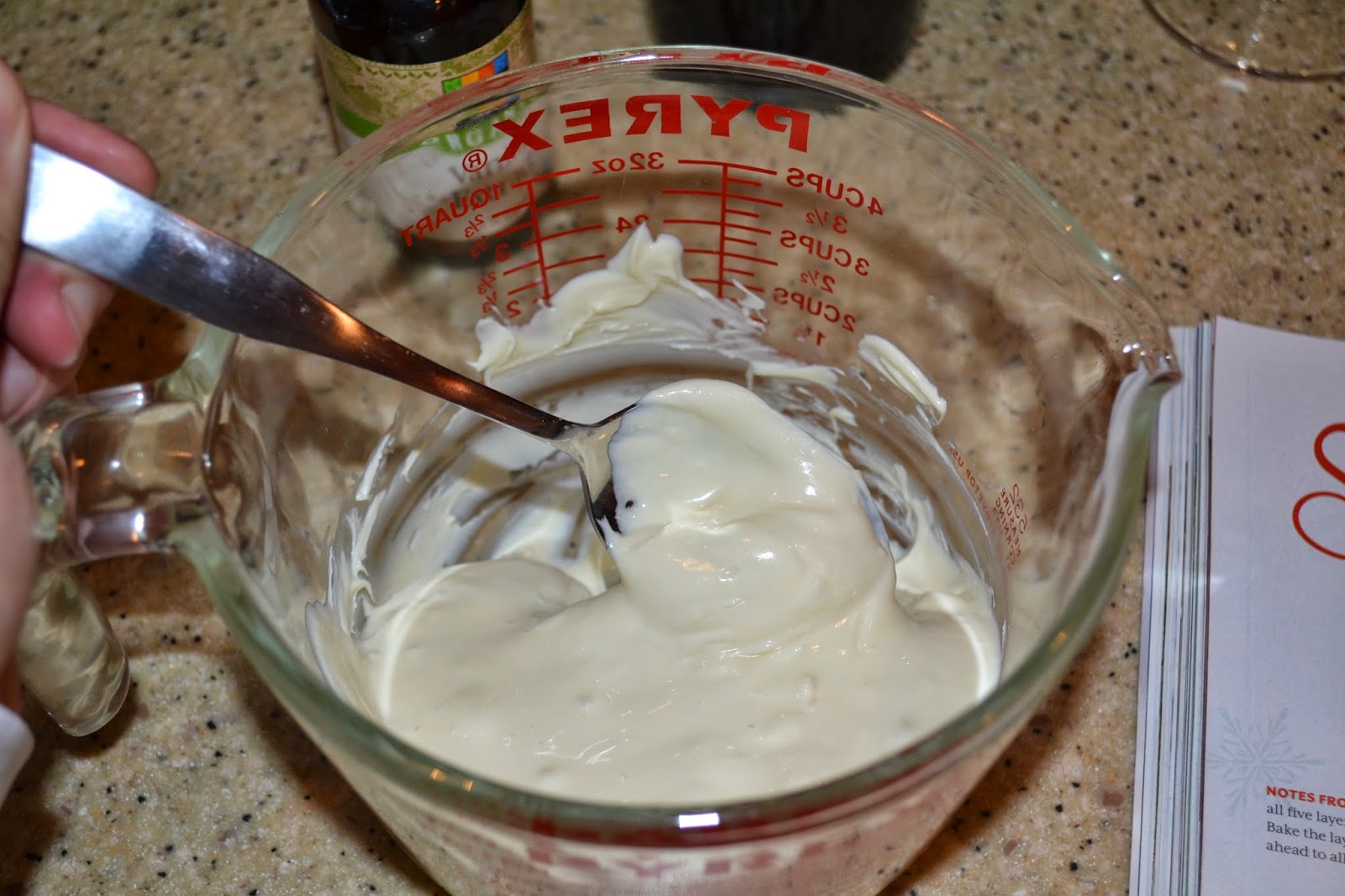 Get the mixer fired up and add the softened cream cheese and chocolate. Mix until creamy. 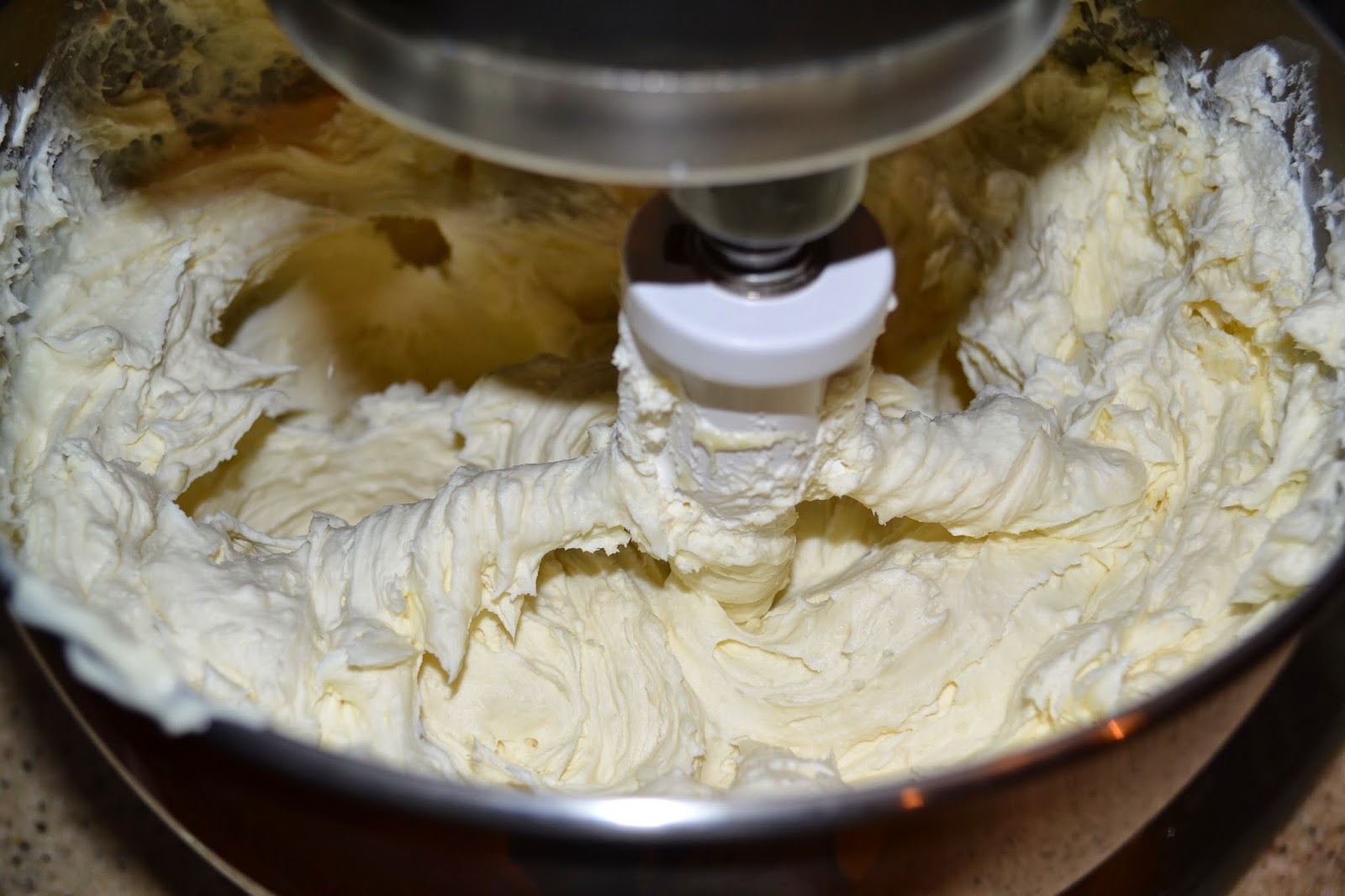 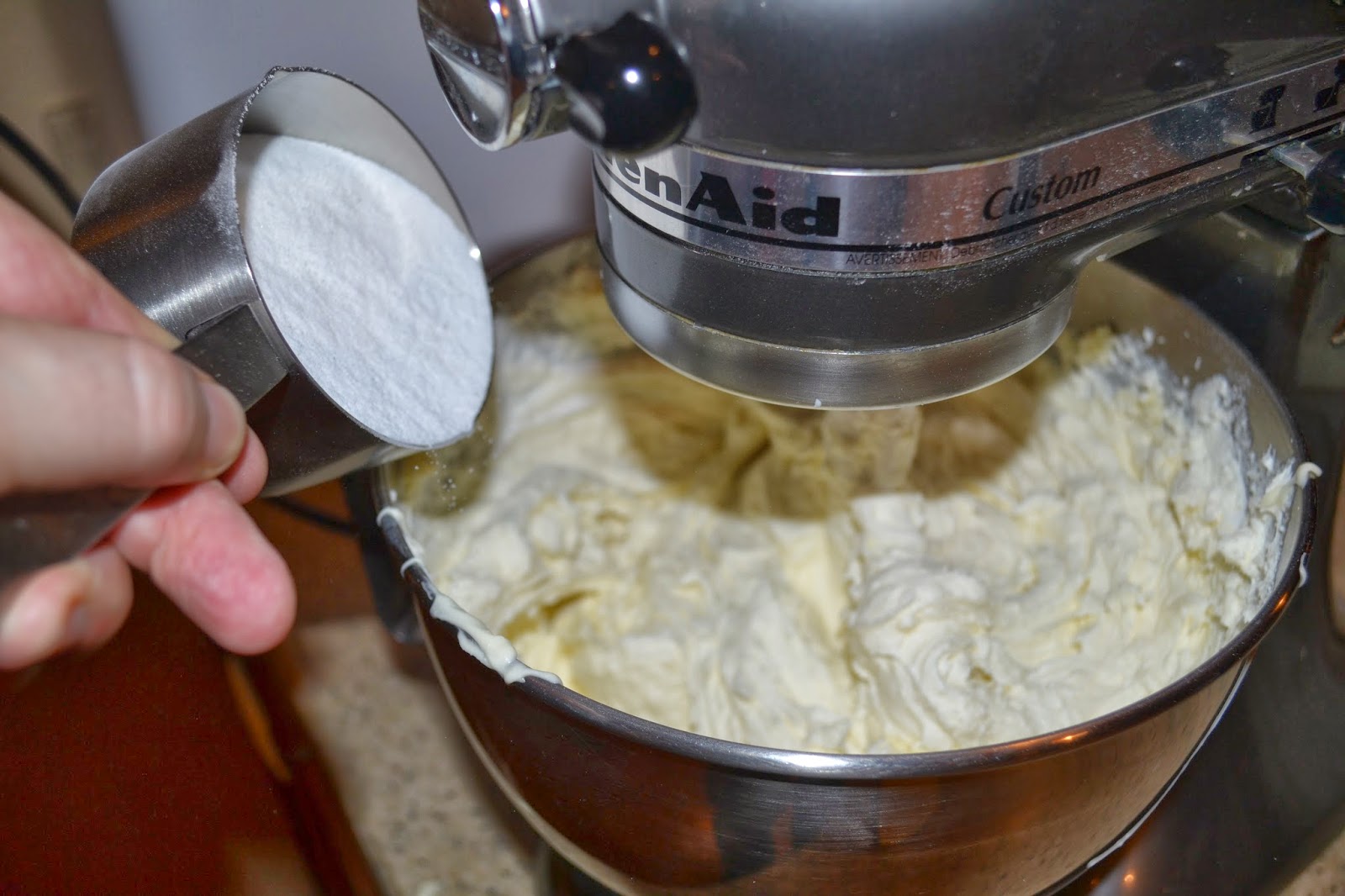 And then 2 eggs and the vanilla. 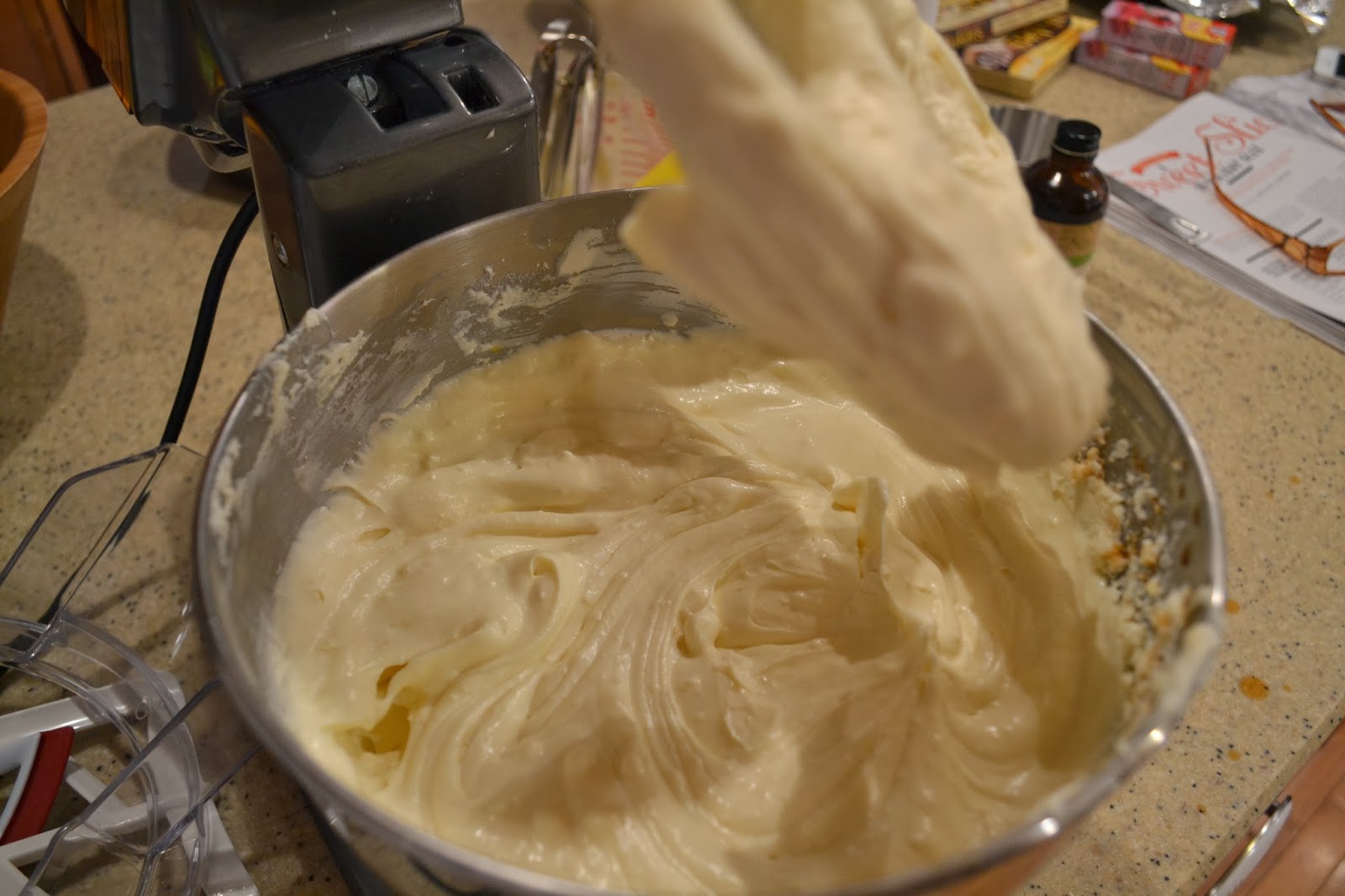 Looks and tastes awesome!
Then spray some non-stick spray on the pans and pour in the mix. 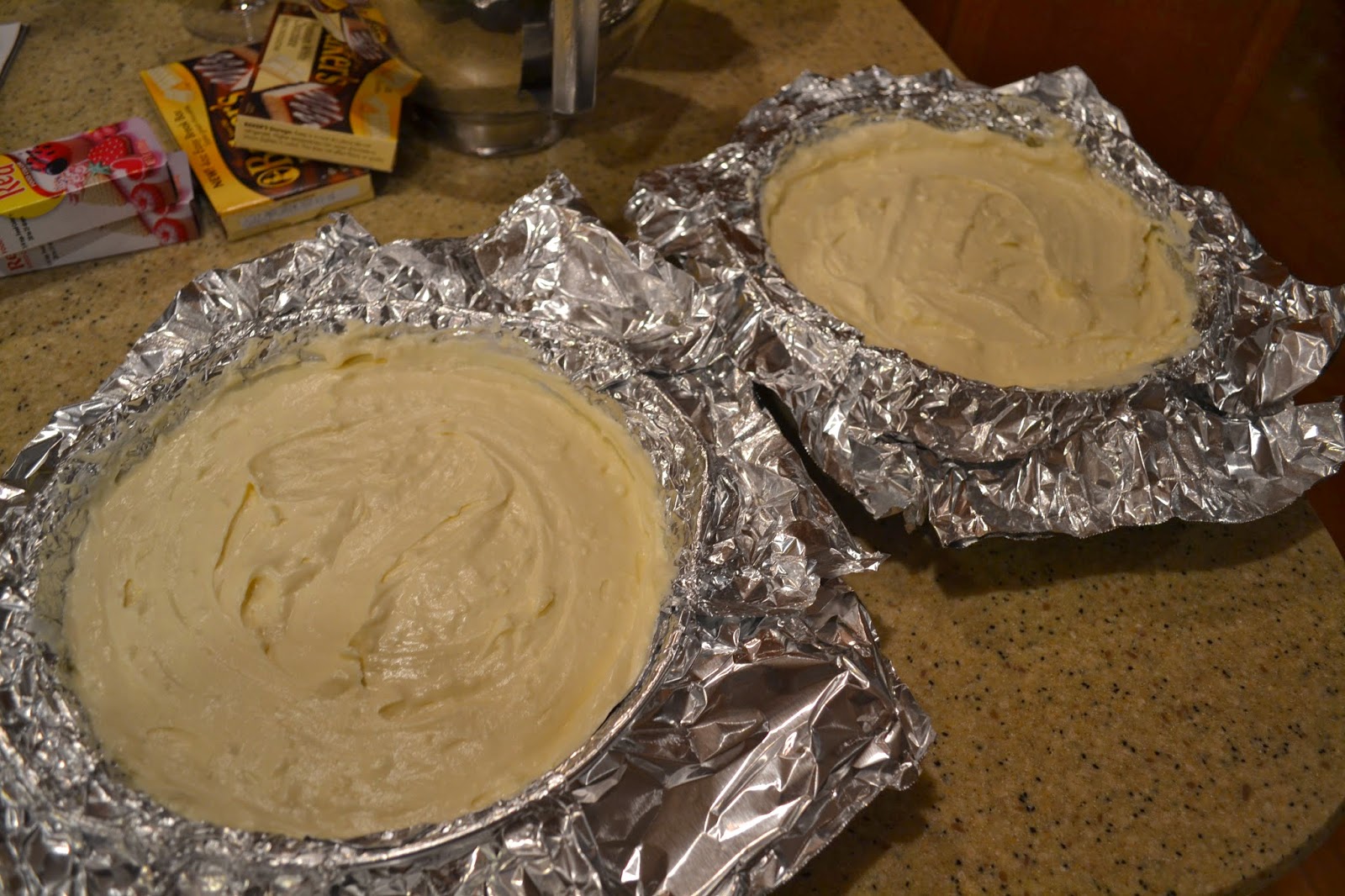 Place in the oven for 30 minutes. 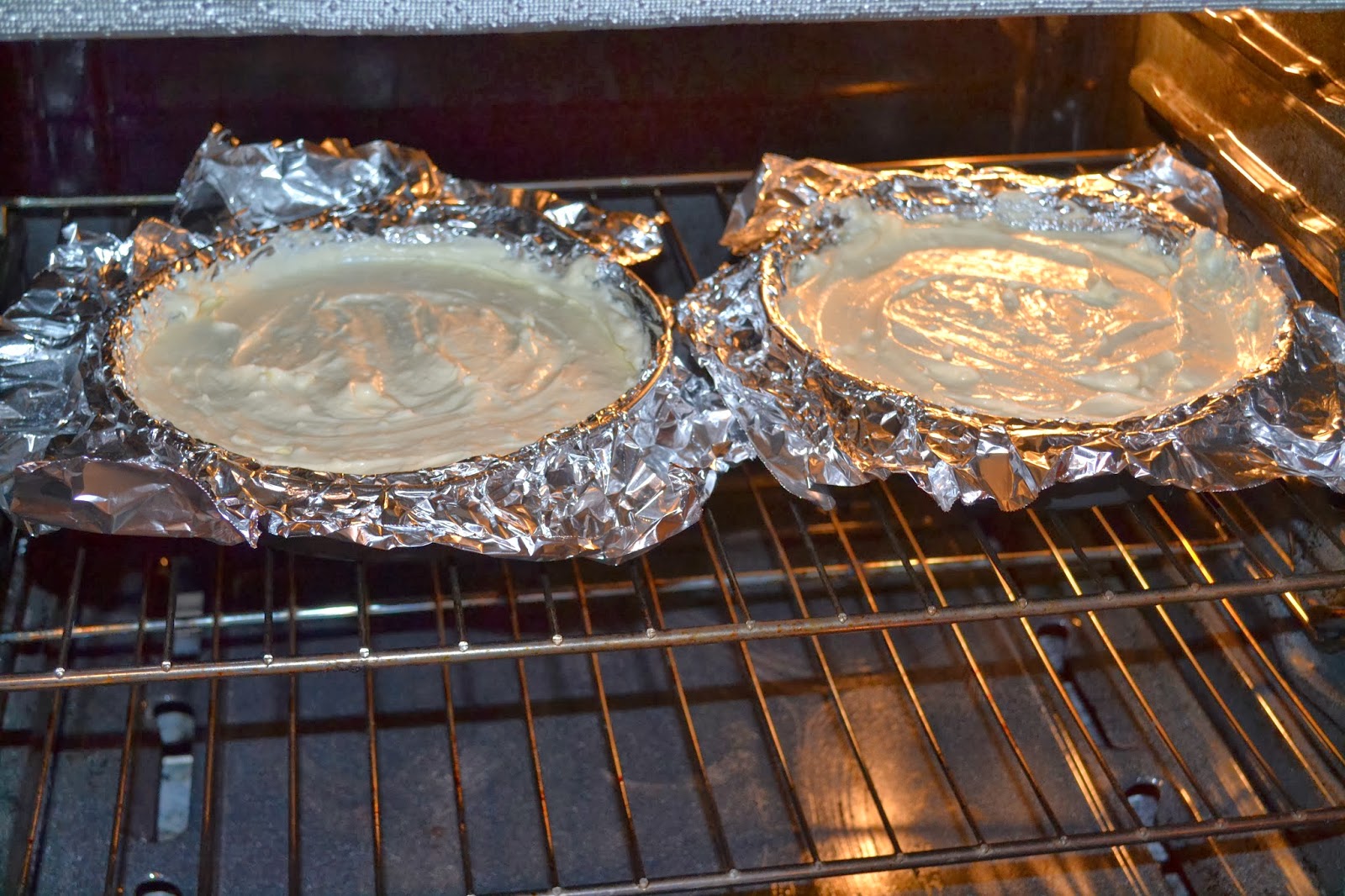 After 30 minutes turn off the oven and let them rest in the oven, door closed, for 30 more minutes. 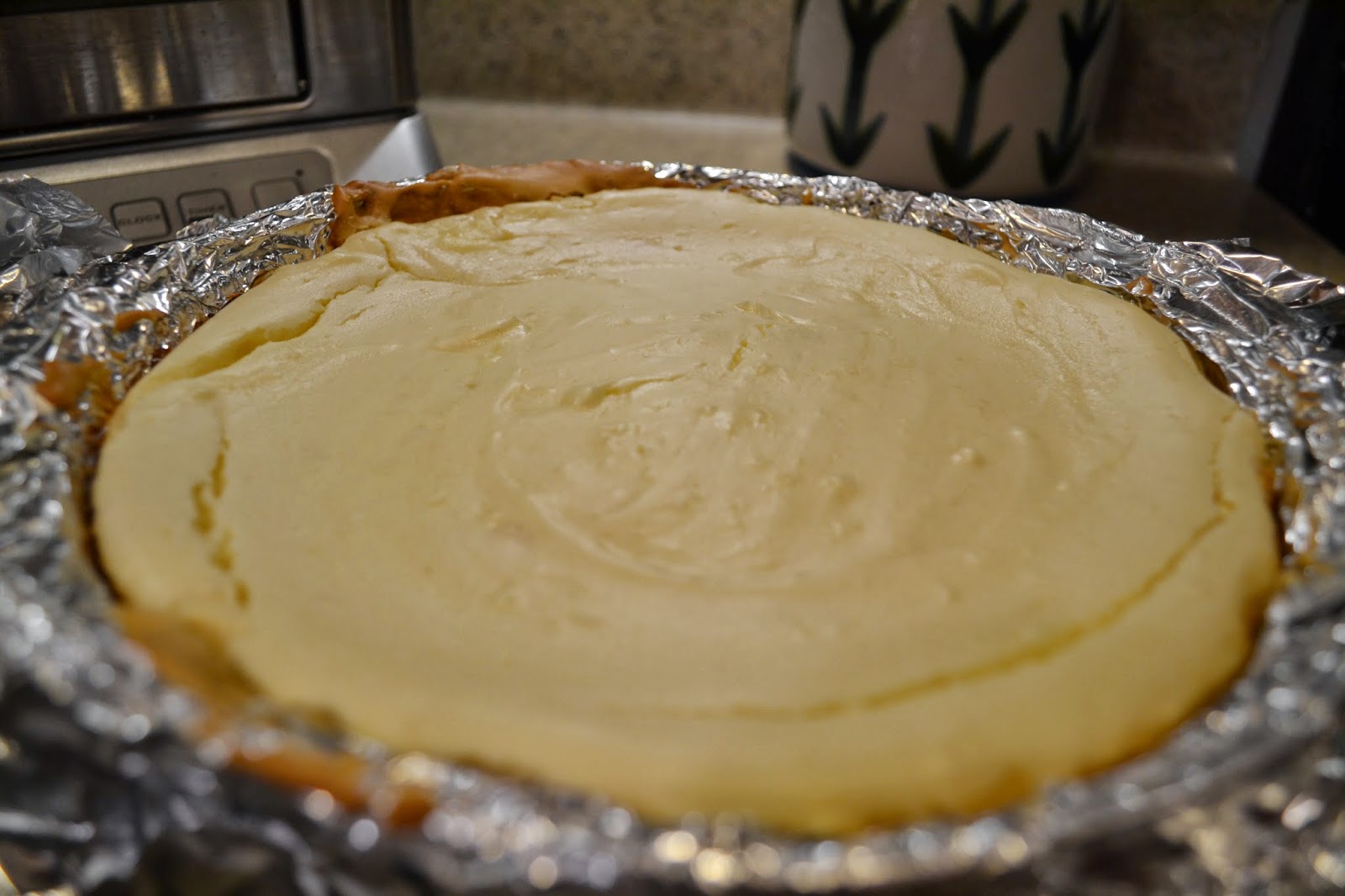 Pull them out and place on a wire rack to cook for at least 2 hours.
Then wrap in saran and place in the fridge. Tomorrow is coming... 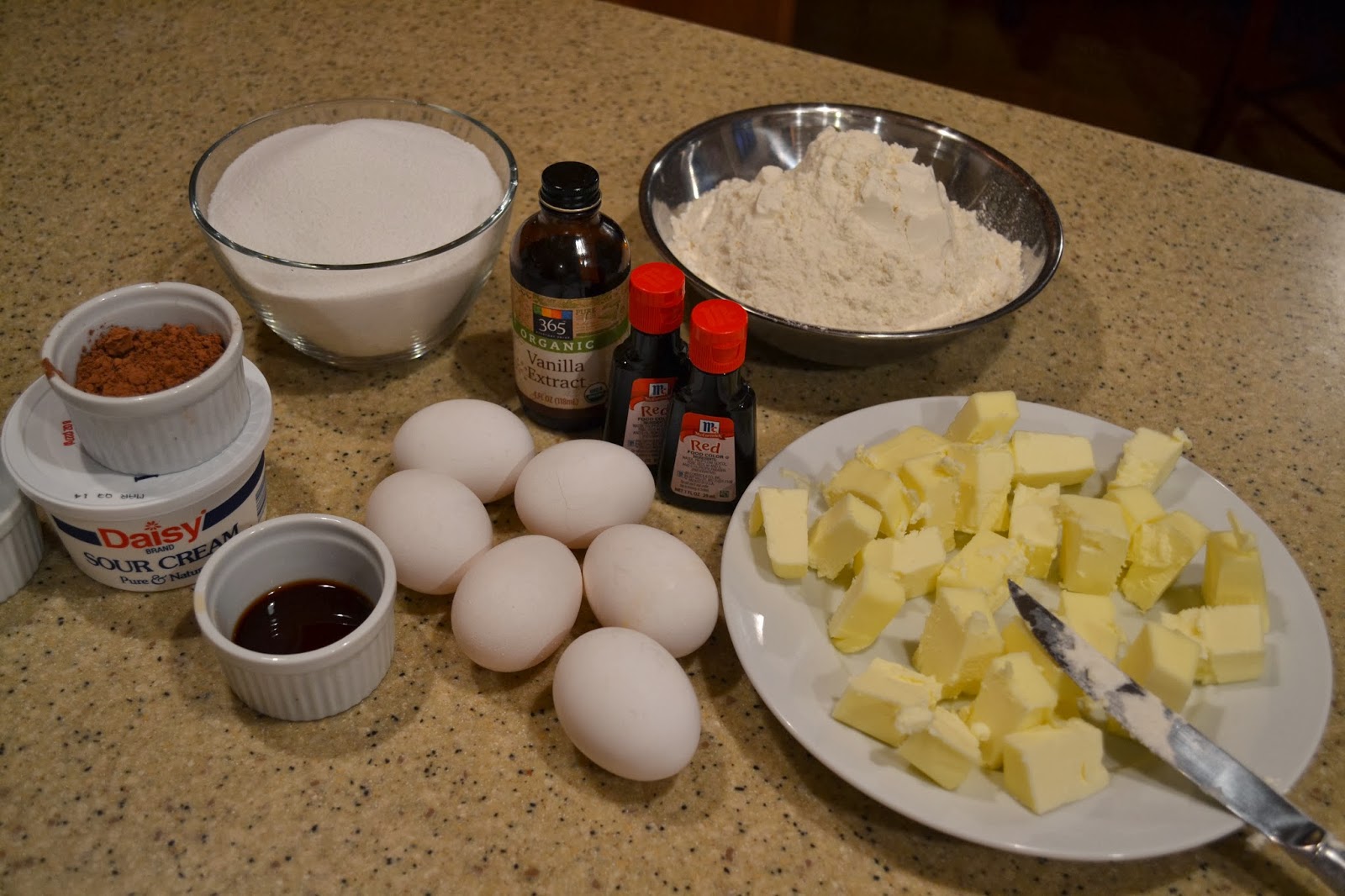 Measure out and assemble the ingredients ahead of time. I think this a more enjoyable method when baking because sometimes timing is critical, and it keeps you from messing up in the frenzy.
Preheat the oven to 350 degrees. 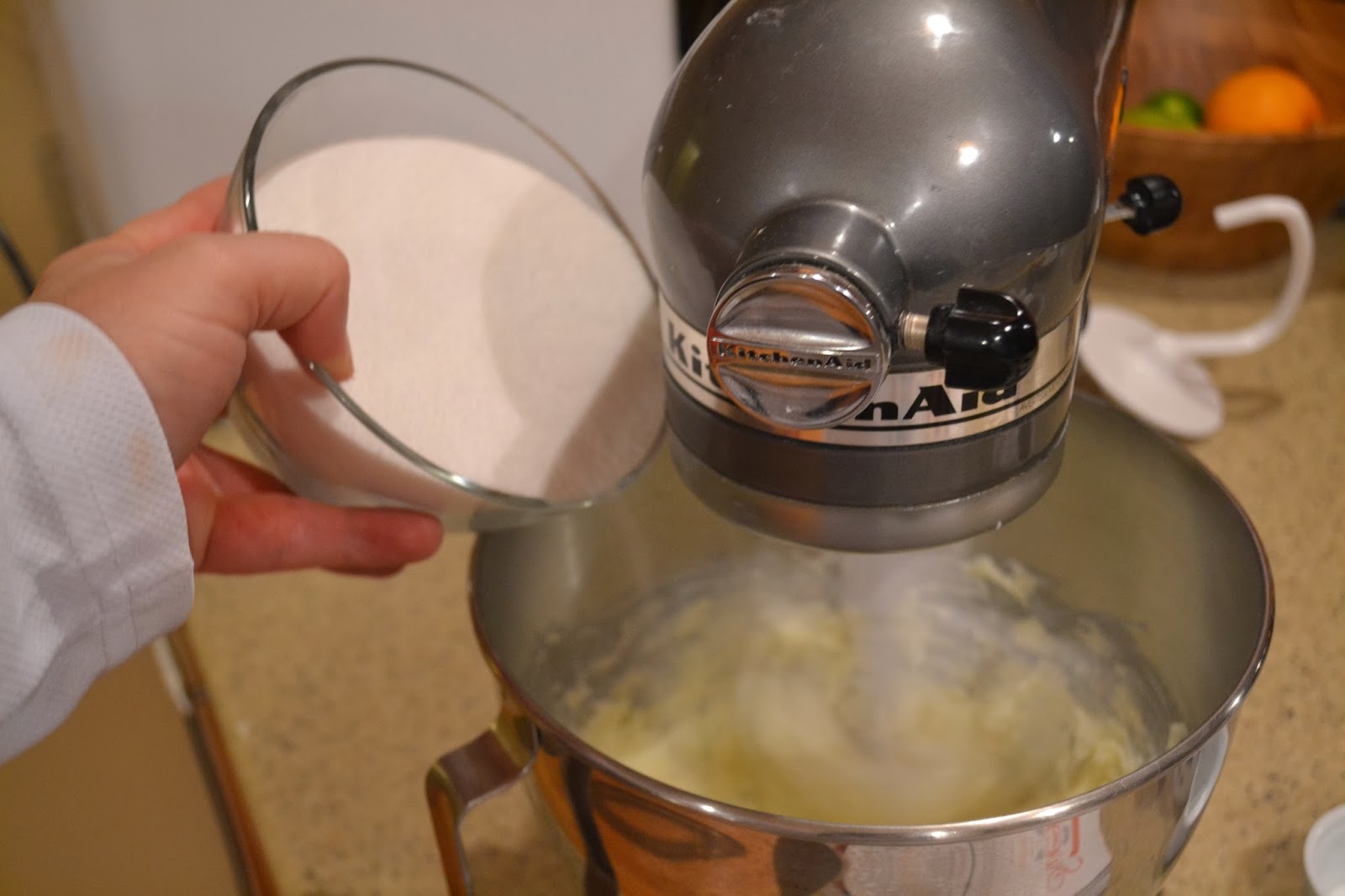 Mix the softened butter and sugar until fluffy and then add eggs one at a time. 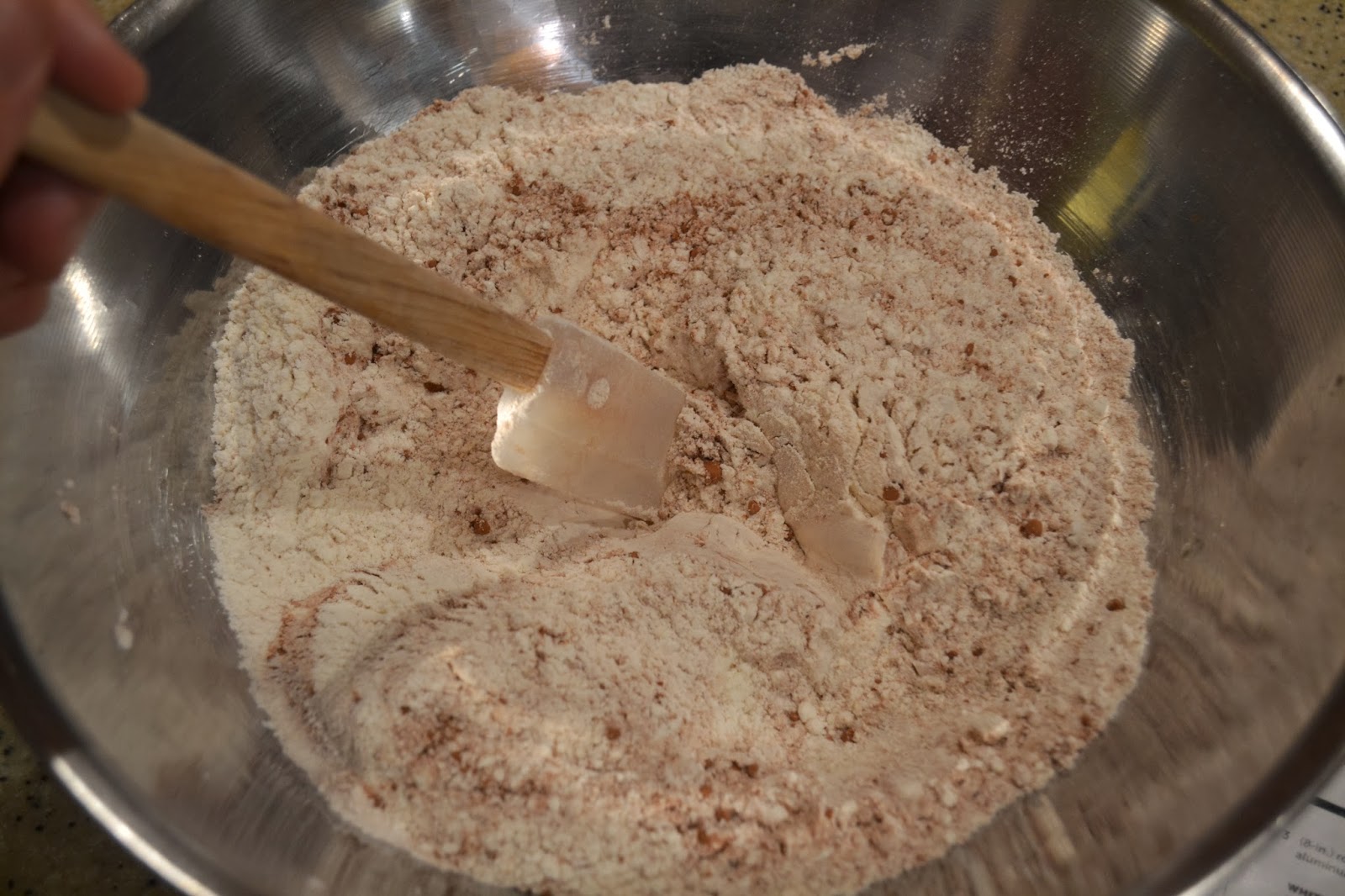 In a separate mixing bowl mix the flour, cocoa and baking soda.
Just enough to mix. Don't mix flour too much.
Alternate the flour mixture and sour cream into the blender mix. 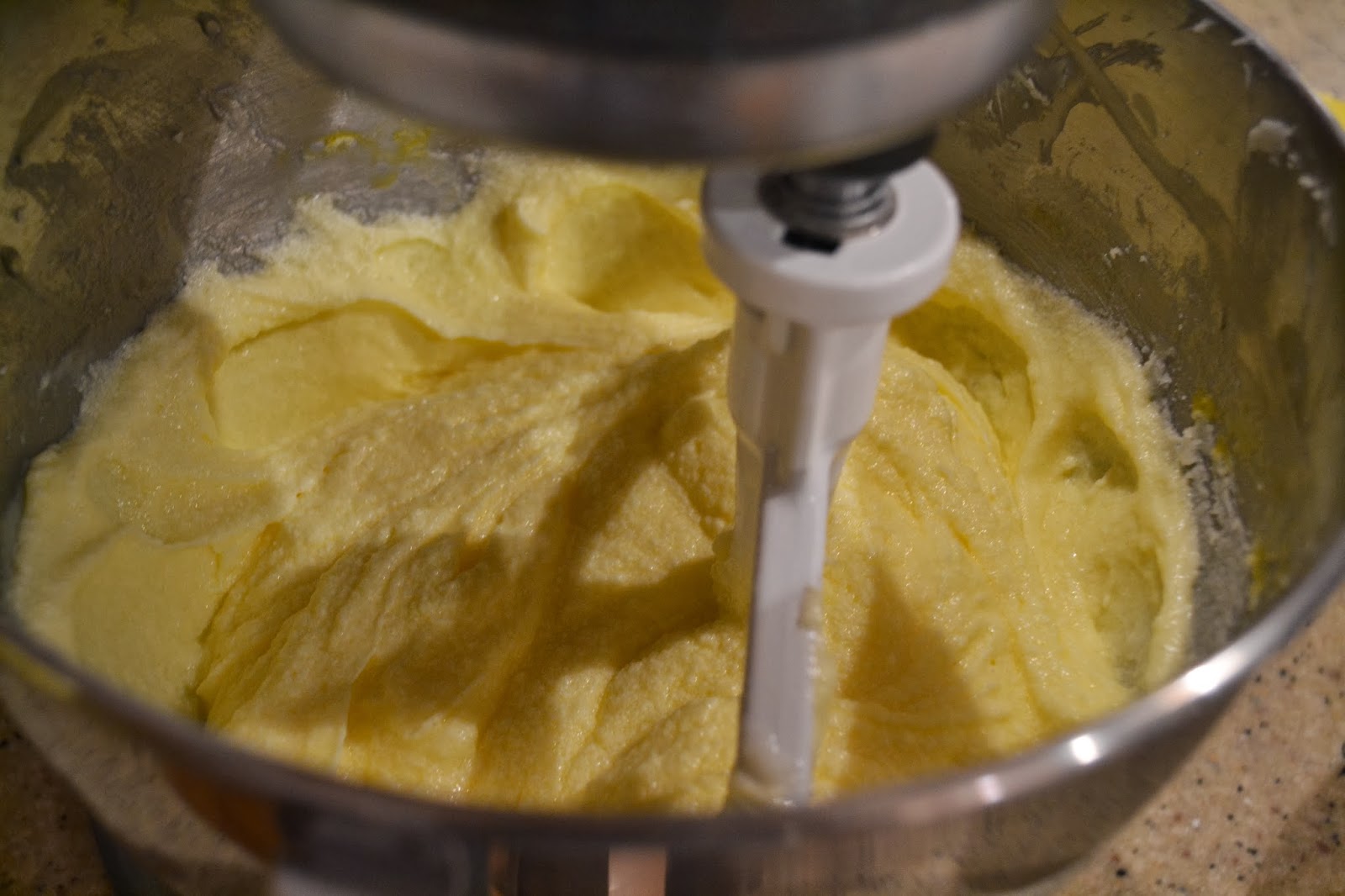 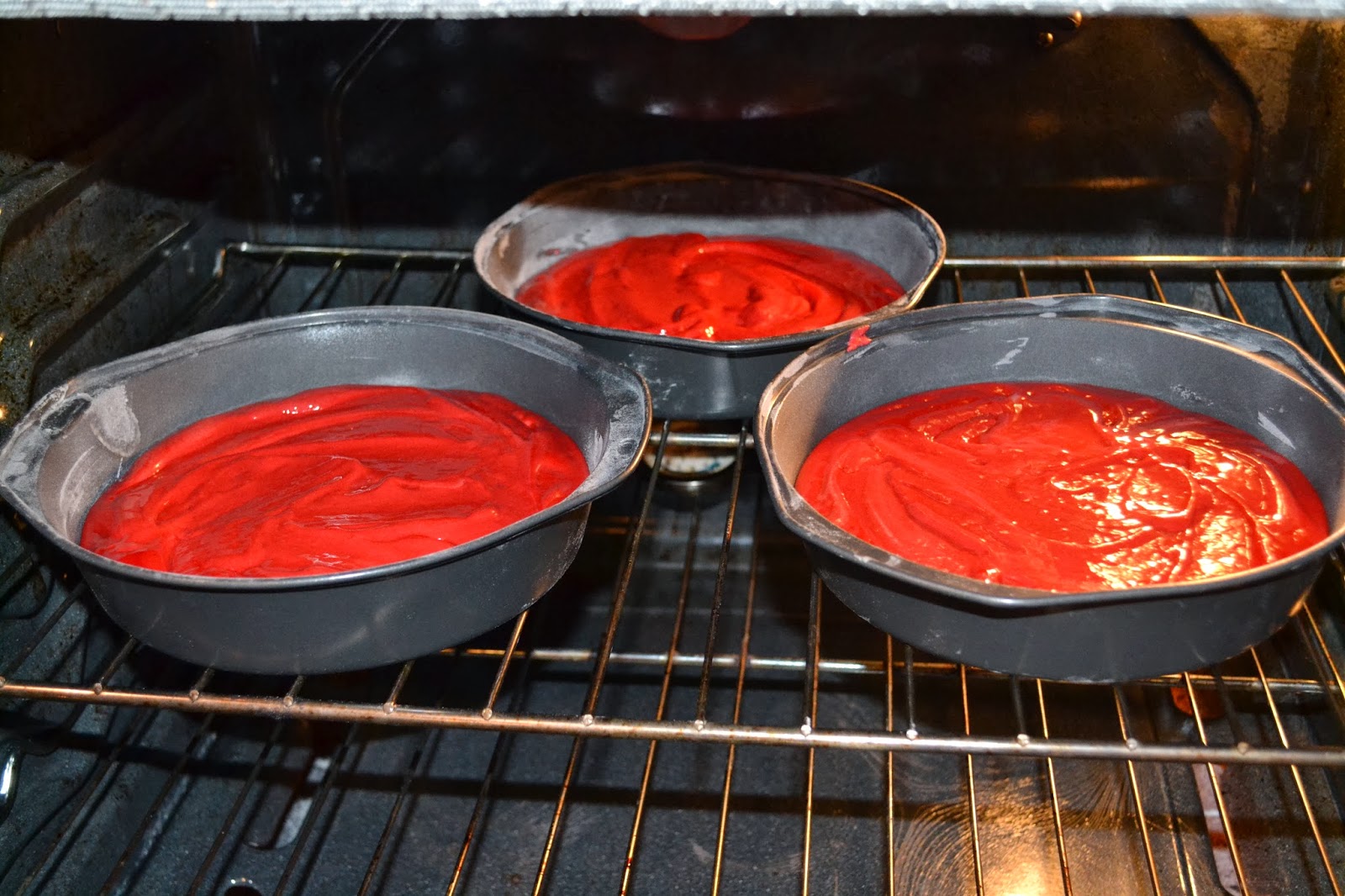 Evenly divide into 3-8" cake pans that have been greased and floured.
Place in the oven and bake for 24 minutes. 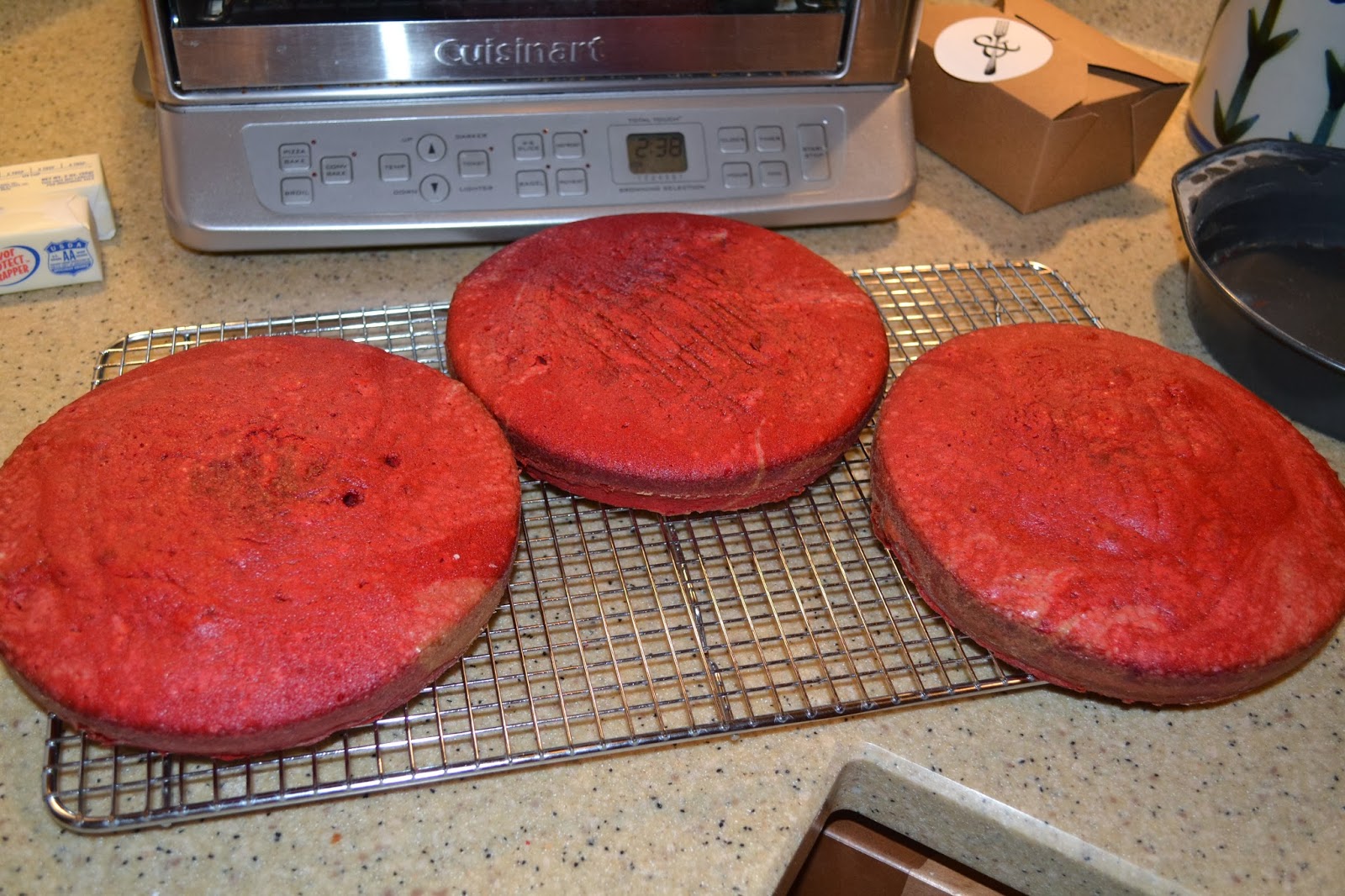 After letting them cool a little in the pan, dump them onto a plate (reverse plate trick)
and move to a wire rack for cooling. 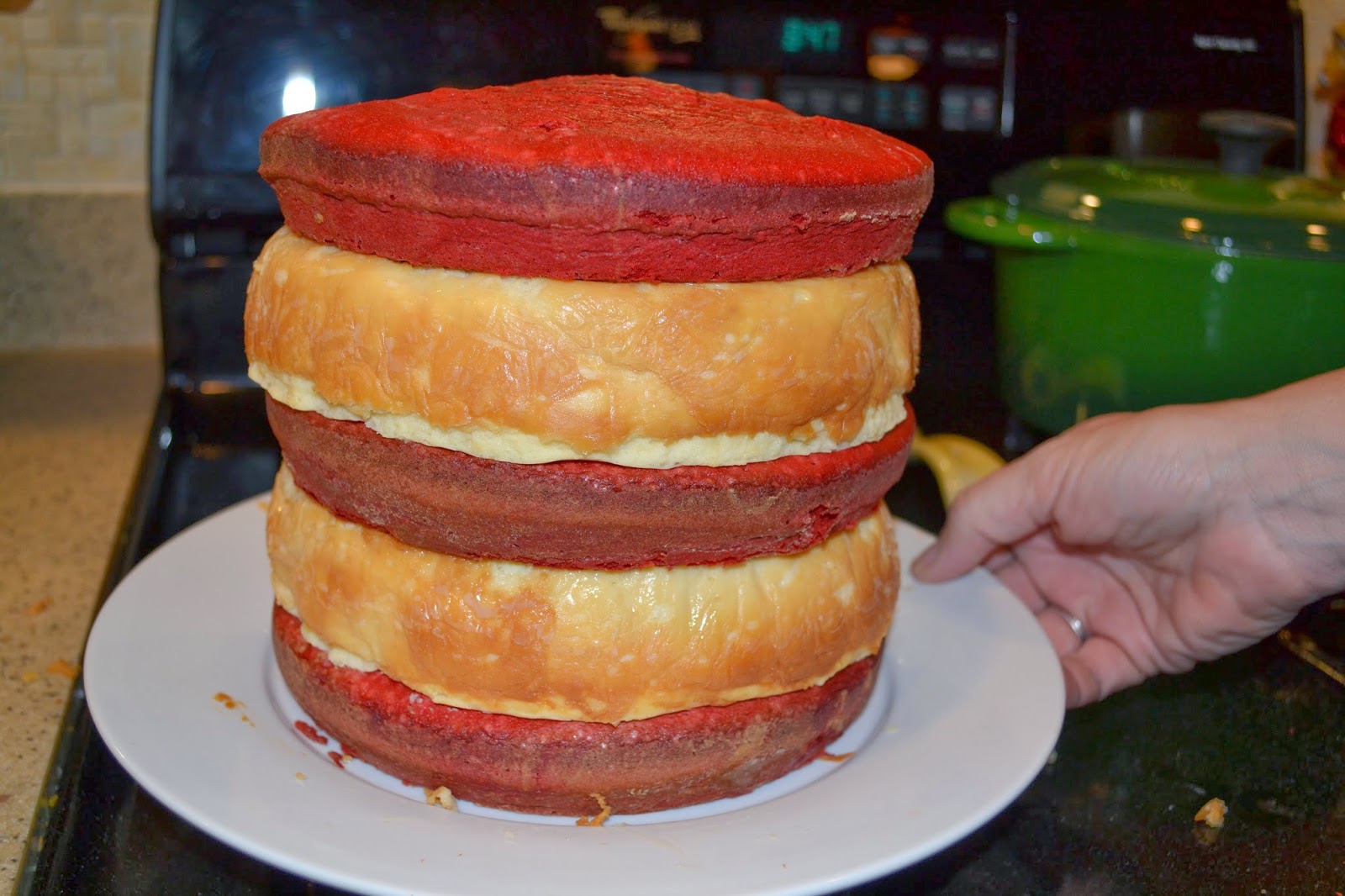 After cooling fully, assemble the layers with the cheesecake.
It makes a very tall cake that has no hope of fitting in a cake carrying device
unless you bought yours at the big and tall store. 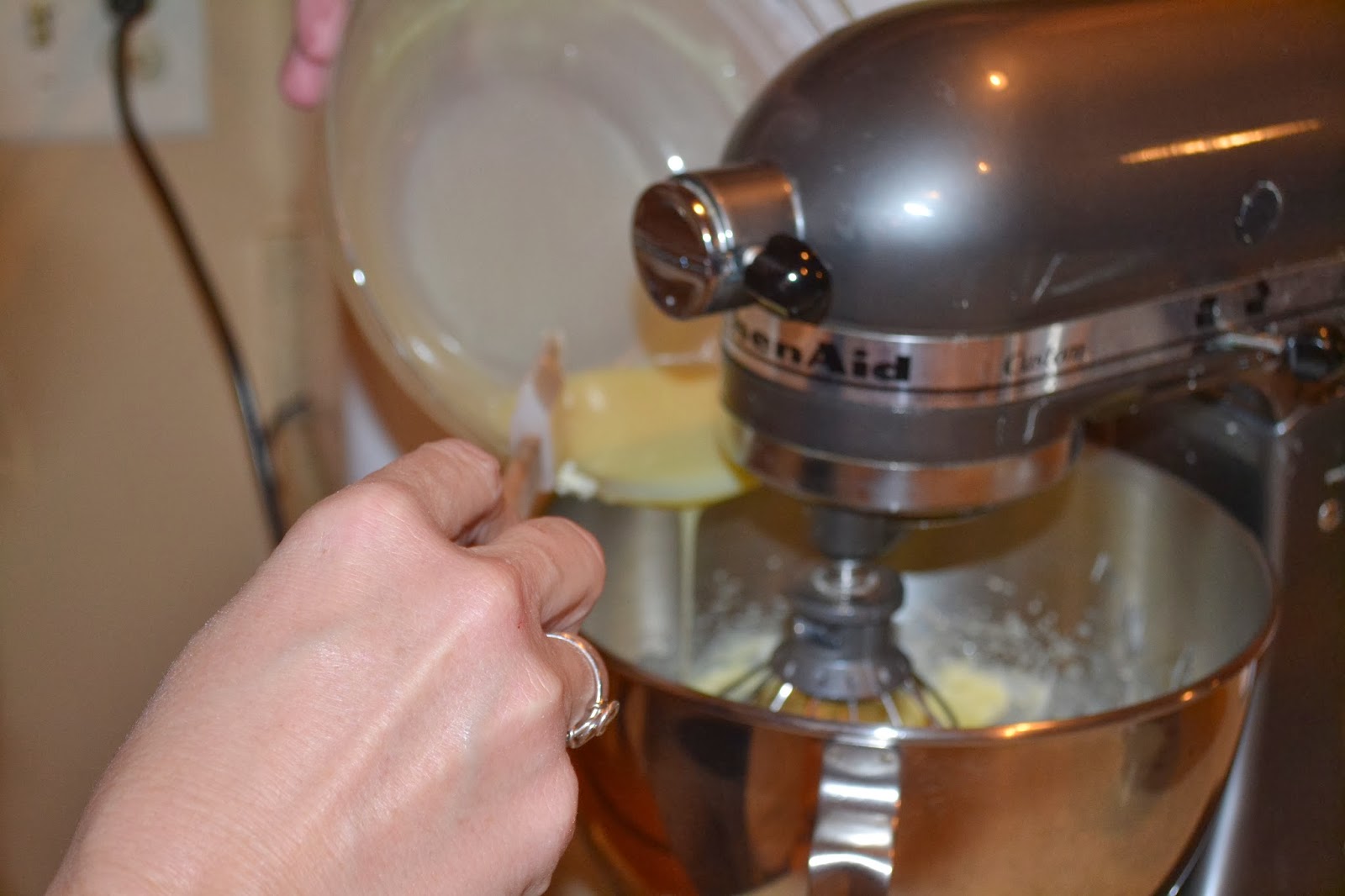 Whisk together the chocolate and 0.5 cups of boiling water until the chocolate melts. Cool 20 minutes and then chill for 30 minutes.

Then beat the 1 cup of softened butter with the chilled chocolate mixture. Gradually add the powdered sugar and salt for a couple of minutes until fluffy. 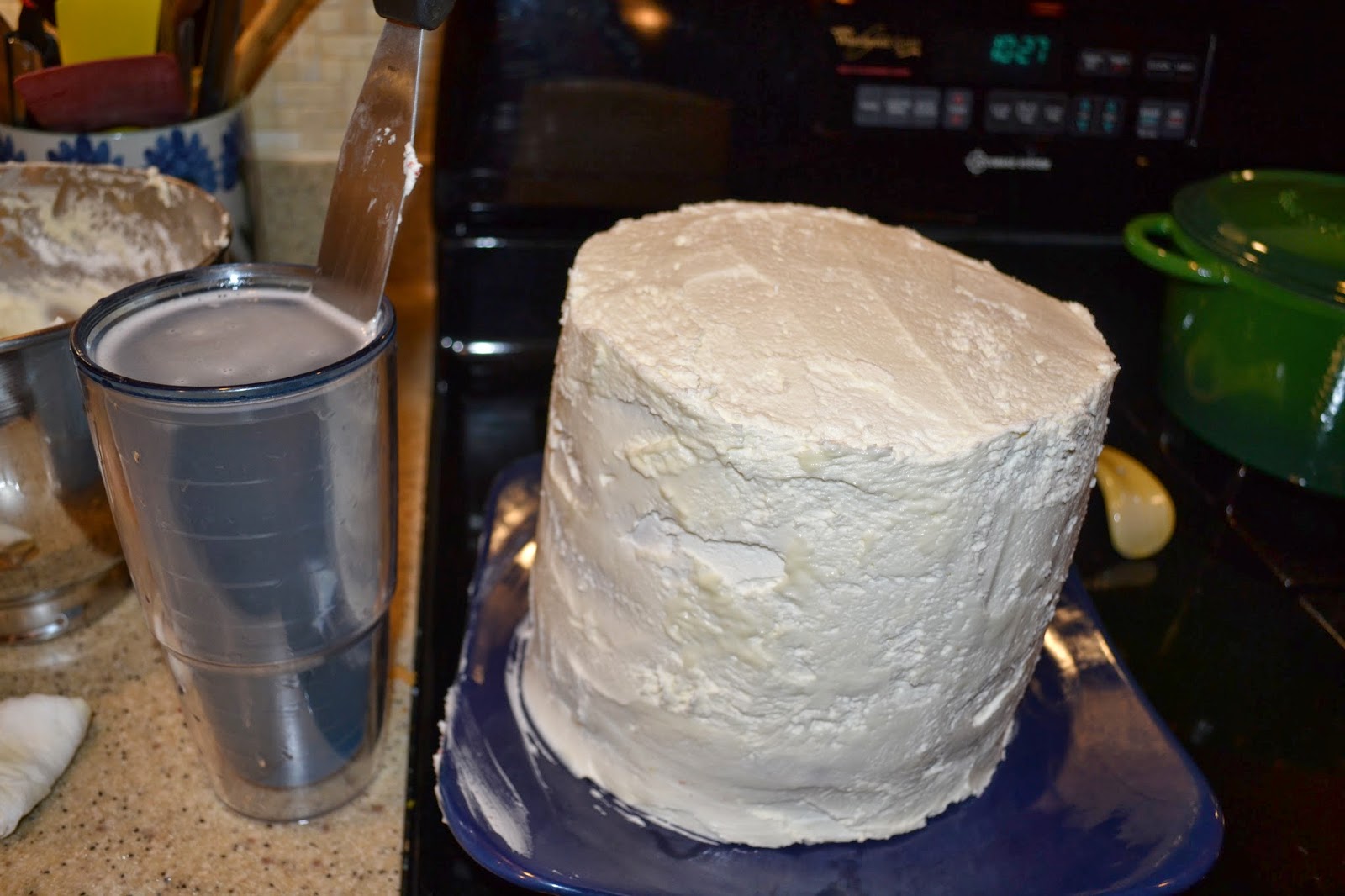 Ice the cake with a flat cake spatula that is heated in water to help make the icing smooth.

Finally, add your leaves and italian wedding cookies and sprinkle with some powdered sugar.

It was great!  But it is a big big cake.  I fed 10+ people with about half the cake.  It really is a beautiful cake, but I did think the red velvet was too dense.  Probably would have been better to eat the day of rather than the next morning, but nevertheless, it was great and I was proud of the results.