It is peach season in Georgia, and as such we are celebrating the occasion by making homemade peach jam just as we saw our grandmothers make. We are going to make traditional jam, and we are going to make a batch or two that has a little bourbon in it.

We purchased a book on canning by Ball, the jar manufacturer, and it was used as our primary research: The Ball Blue Book guide to preserving. We also purchased liquid pectin, jars, a basket to keep the jars from touching the bottom of the hot water bath, a kit that contained a jar lifter, funnel, and a magnet on a stick that helped with fishing lids out of nearly boiling water.

Oh, and let's not forget the ingredients. We purchased a box of fresh Georgia peaches from the local farmer's market, a 25-pound bag of sugar (yeah, jam has a lot of sugar in it), lemon juice and the liquid pectin that was mentioned previously. We also used a little Maker's Mark. 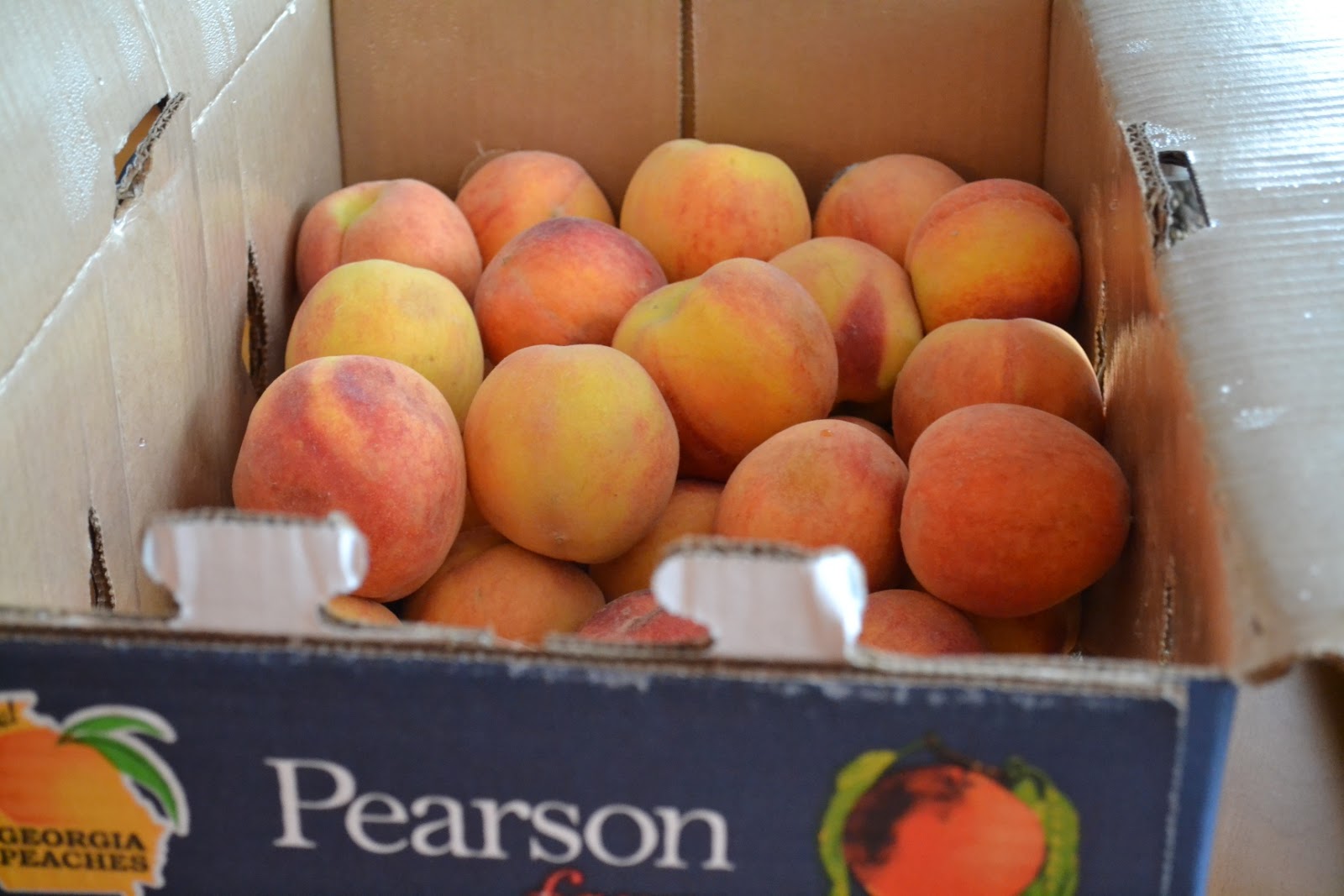 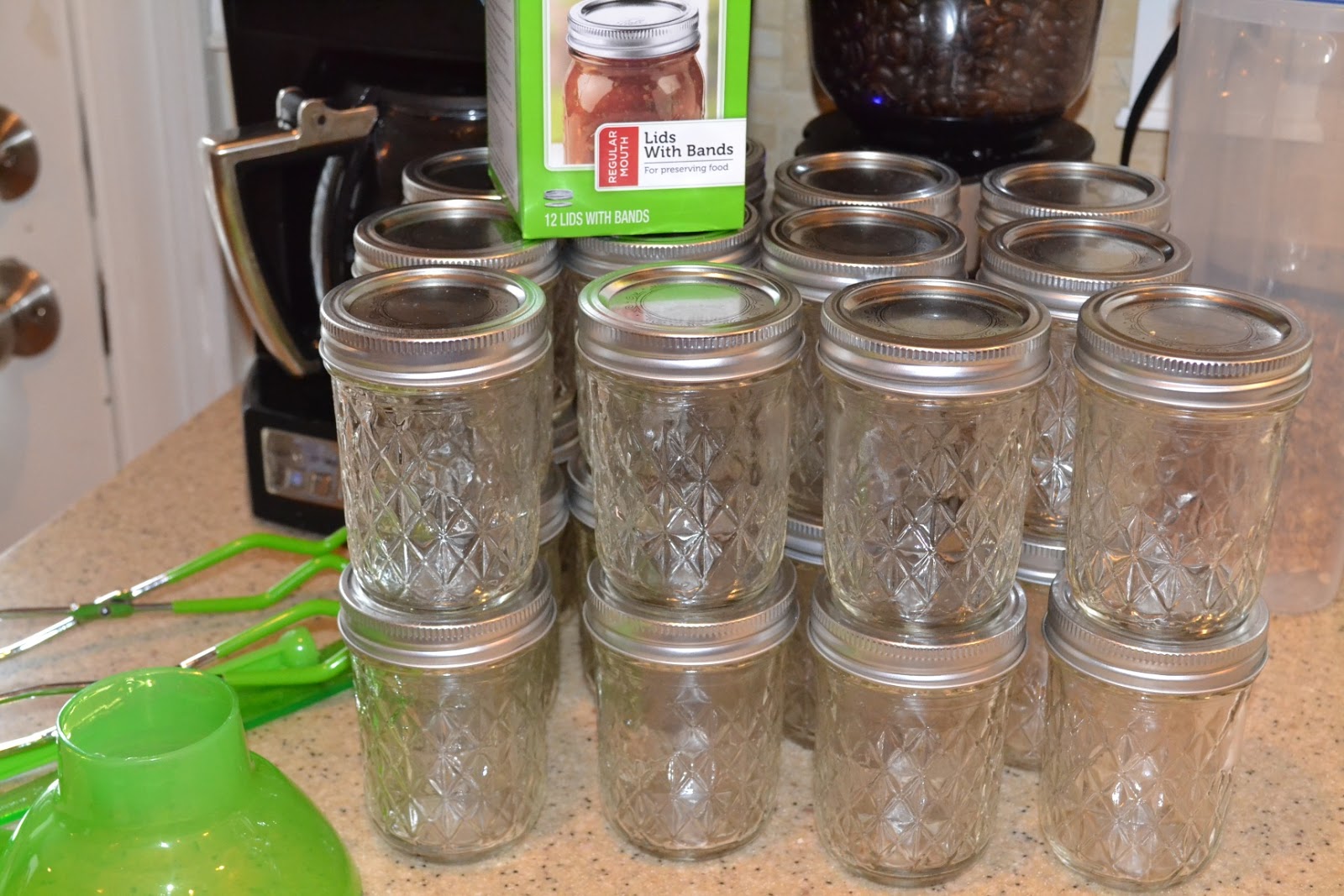 Blindly follow the directions in the Ball Blue Book because neither of us has ever done this. For this, sadly, no wine. 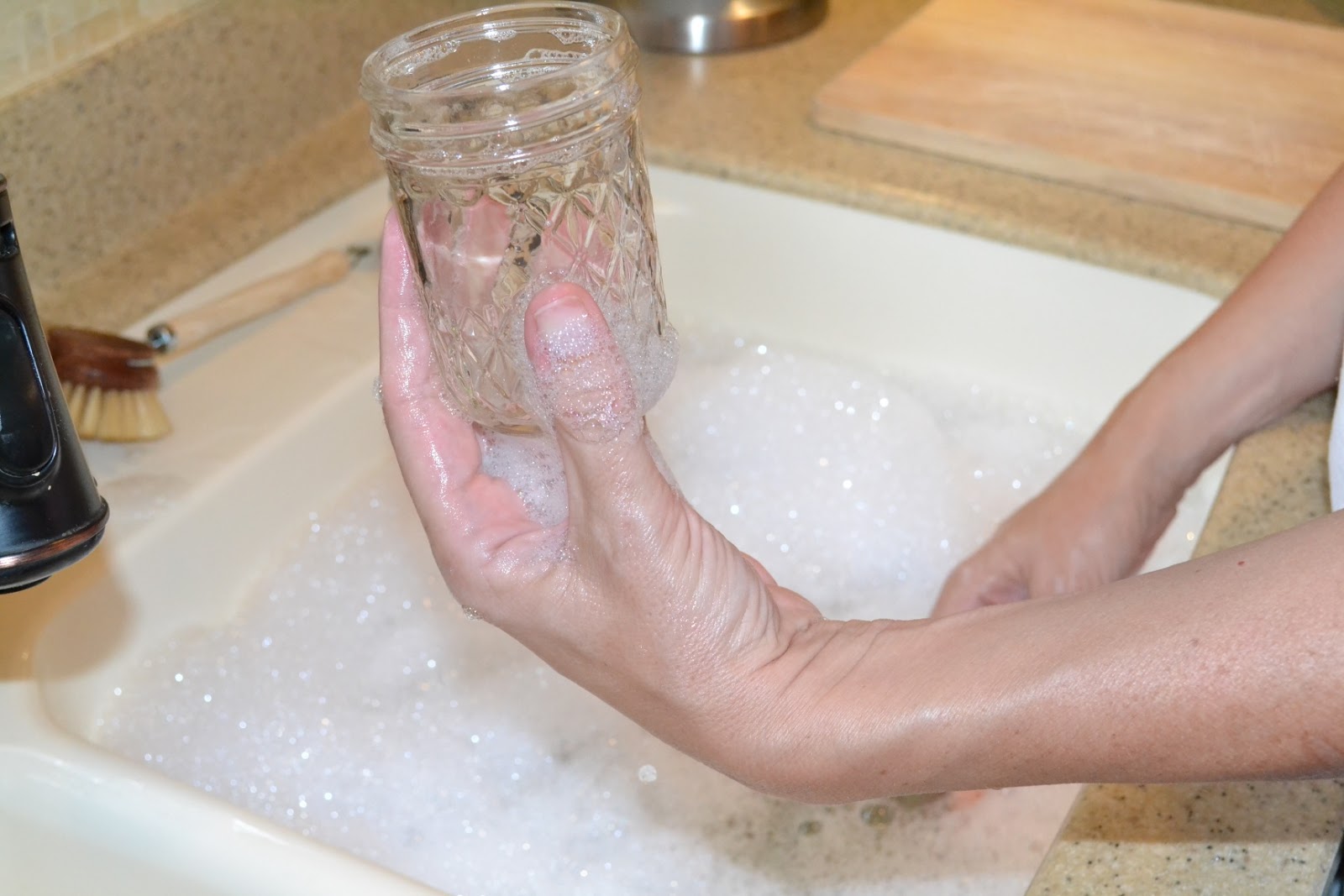 Wash the lids and jars in warm soapy water

We then learned it was best to go ahead and get the big pots of water on the stove and heating. This much water takes a long time to get boiling.  You need one pot to keep the jars sterile until they're ready to be filled, and you need another pot that will be used to boil your filled and sealed jars. 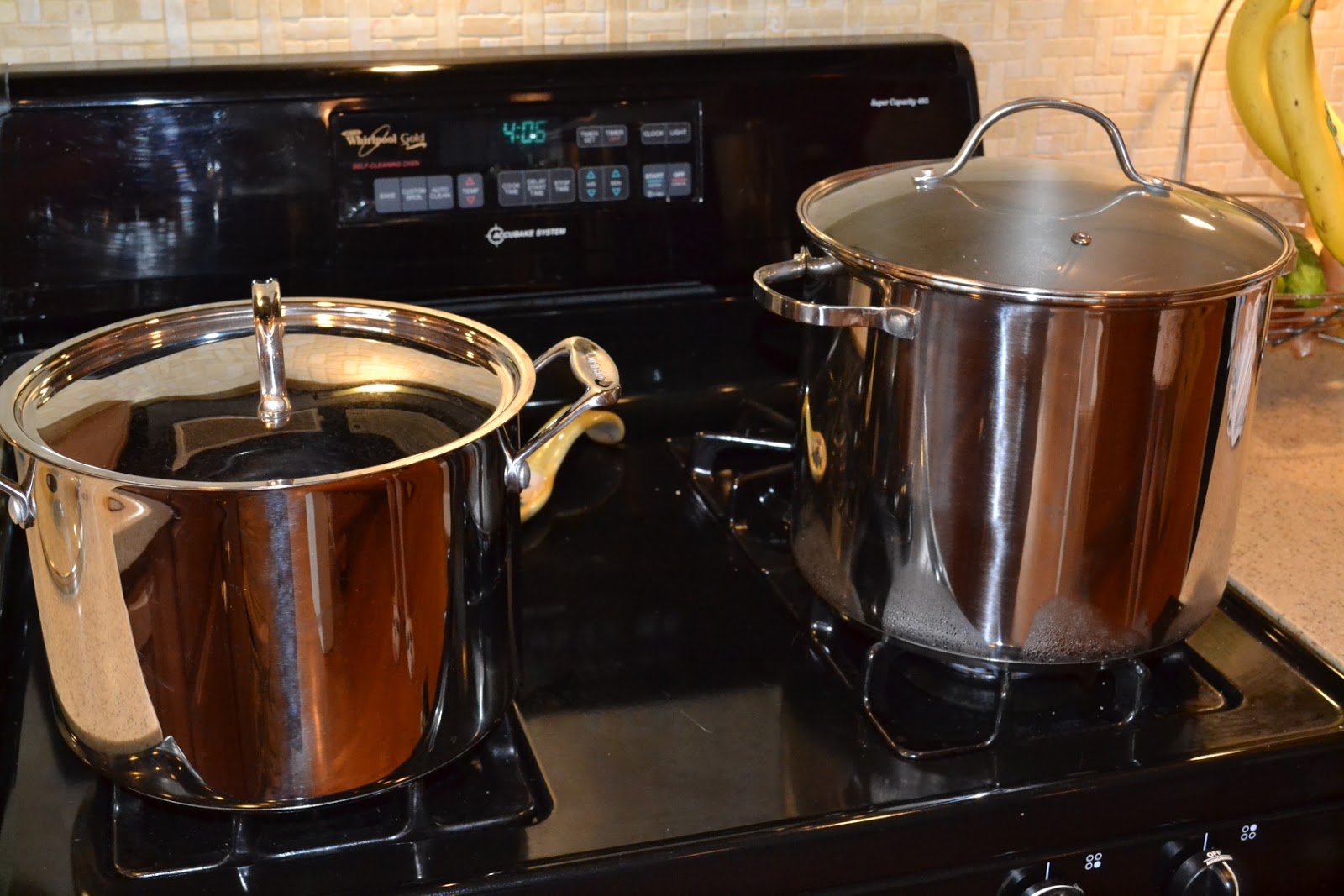 Keep the lids on to heat faster 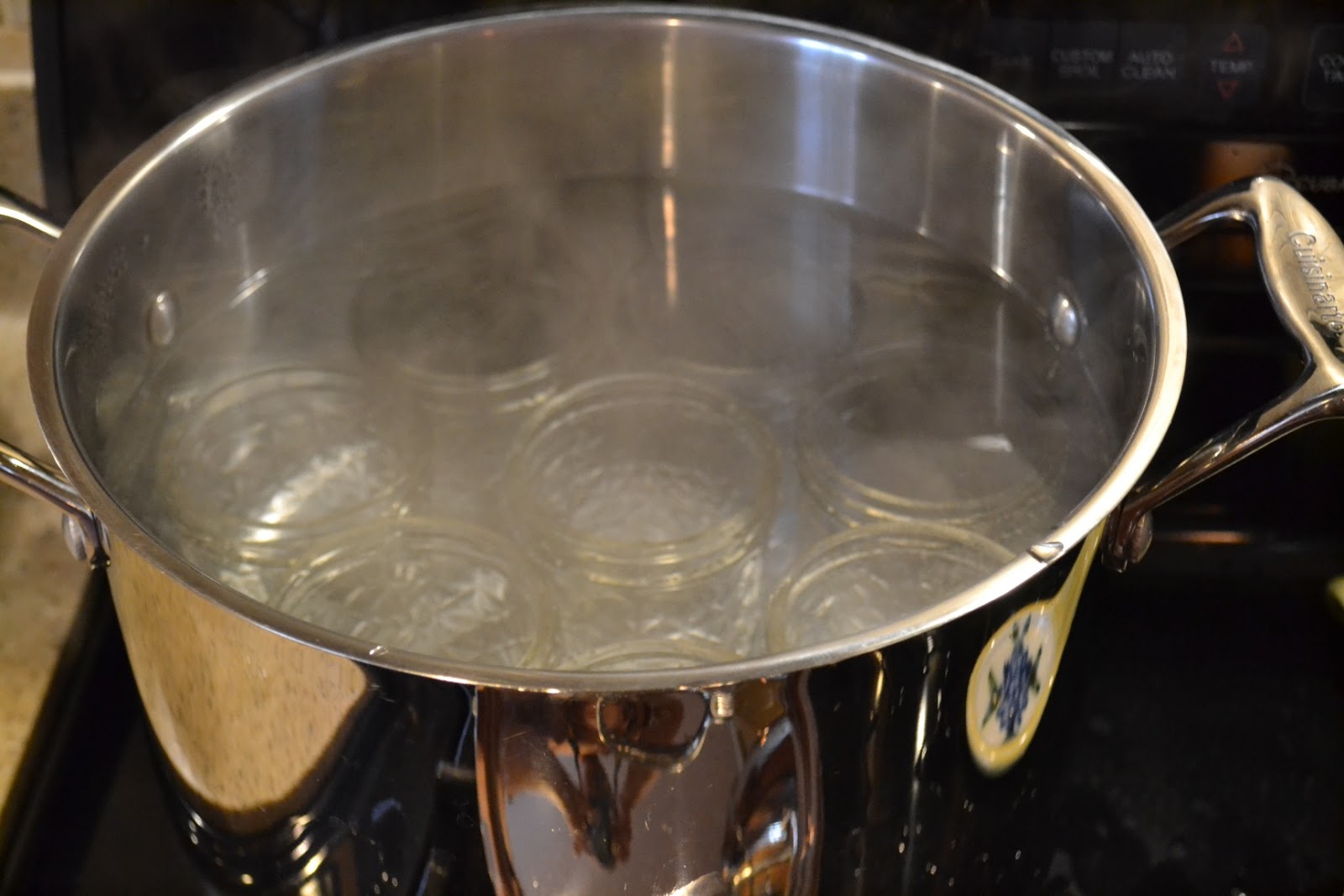 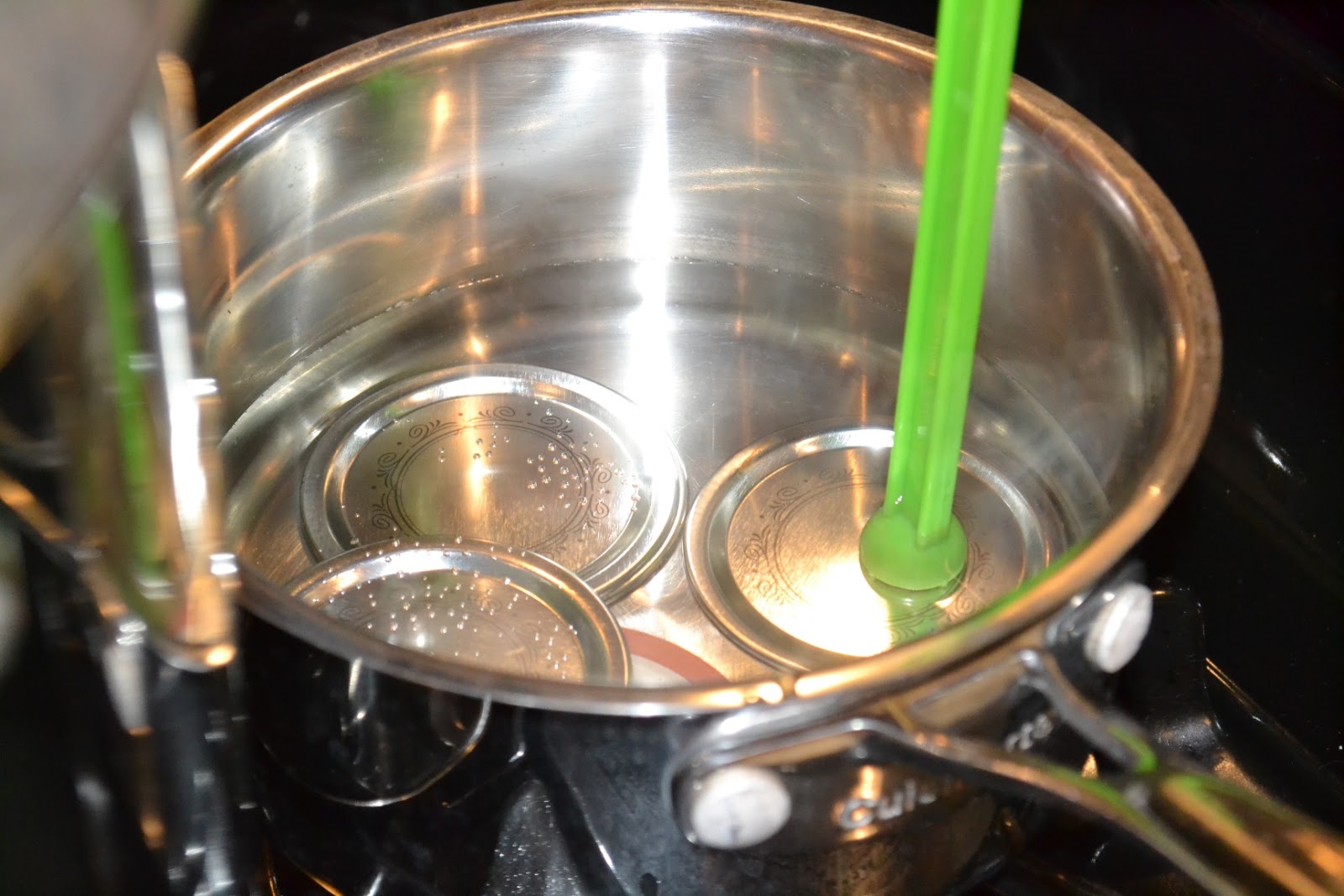 You shouldn't boil the lids. They should be at 180 to prevent damage to the seals.

Ok, now that everything is heating, it is time to get the jam ready. A pretty simple process.

Dice up 4 cups of peeled peaches. For us, that was about 7 peaches. 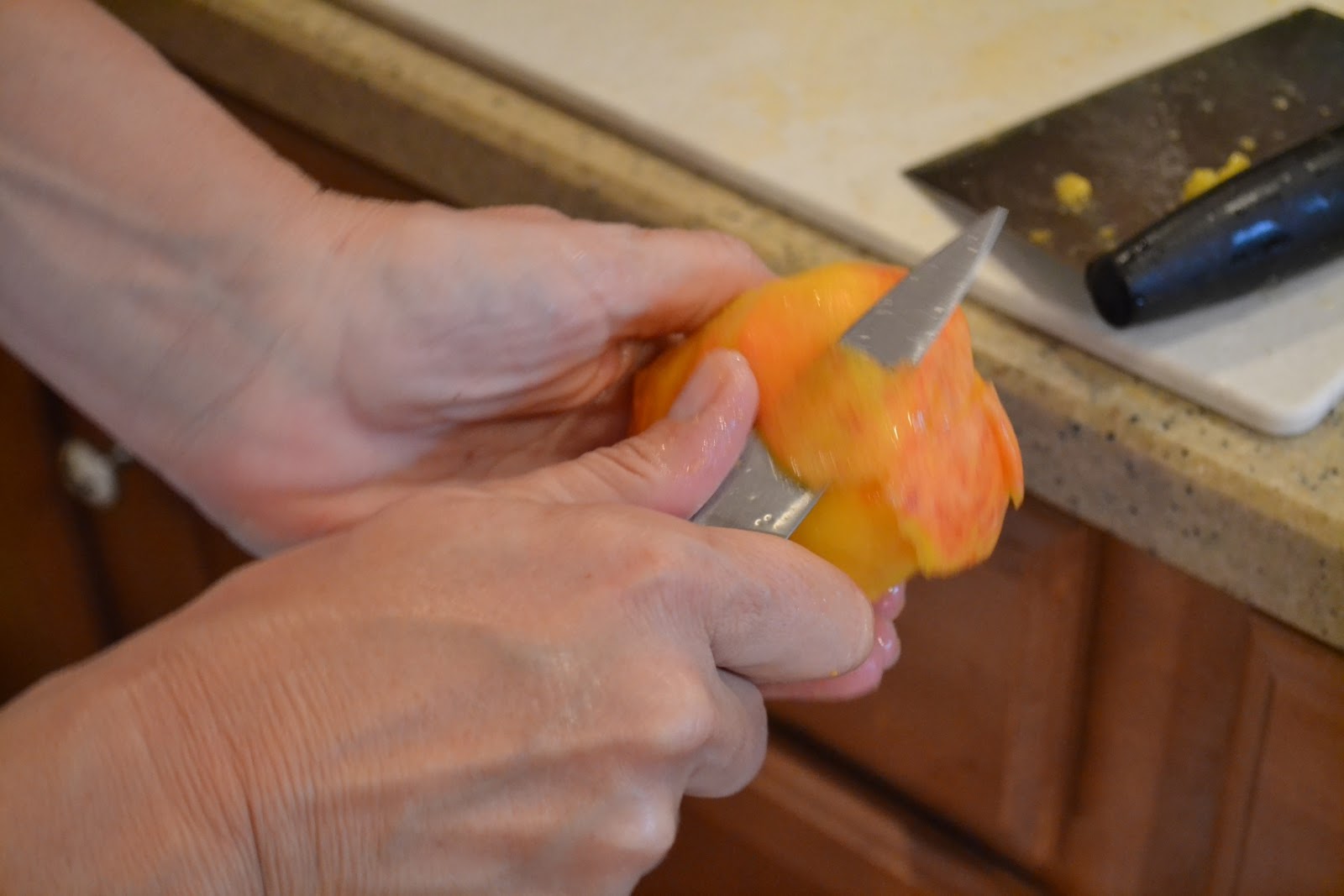 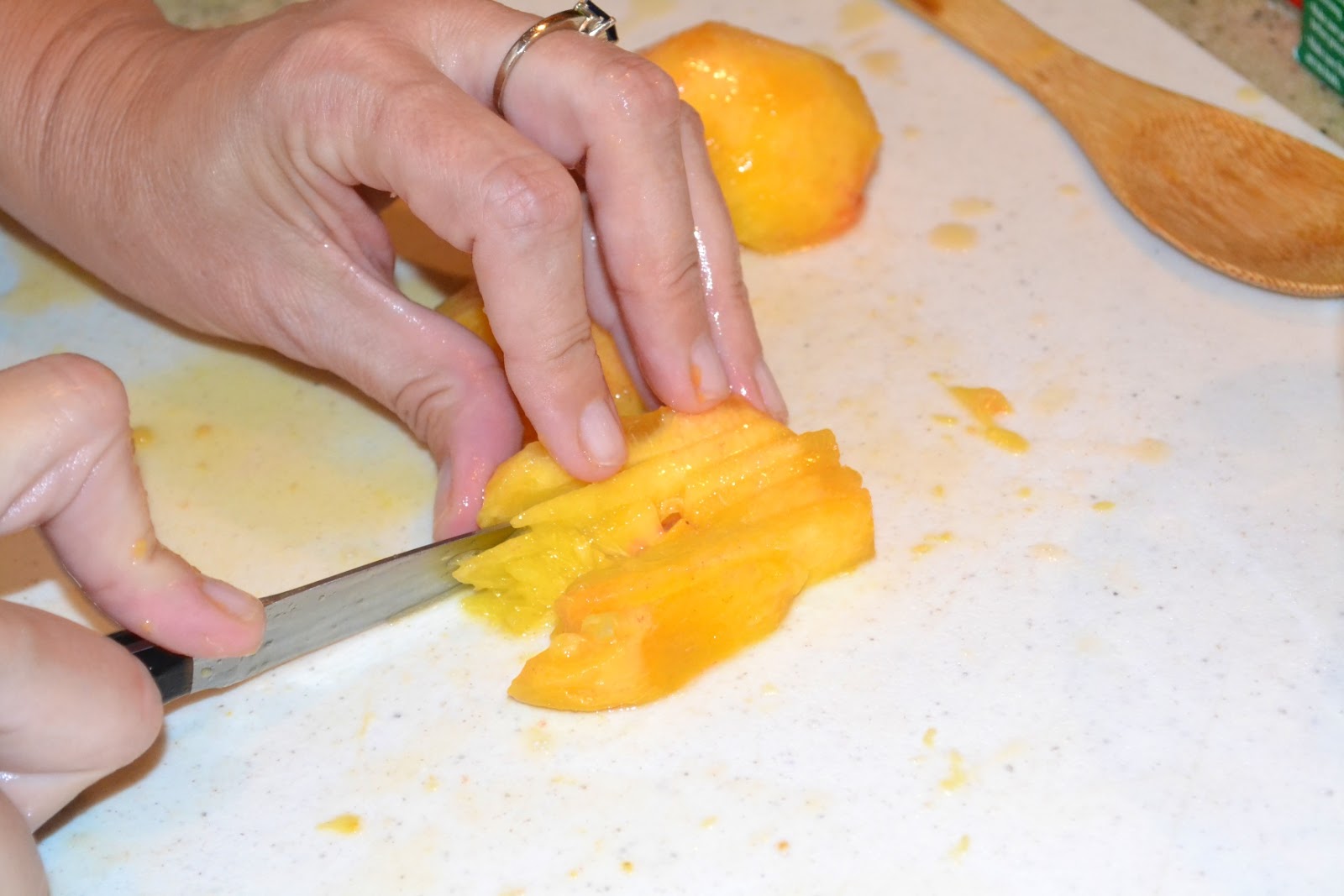 and slice, and then dice 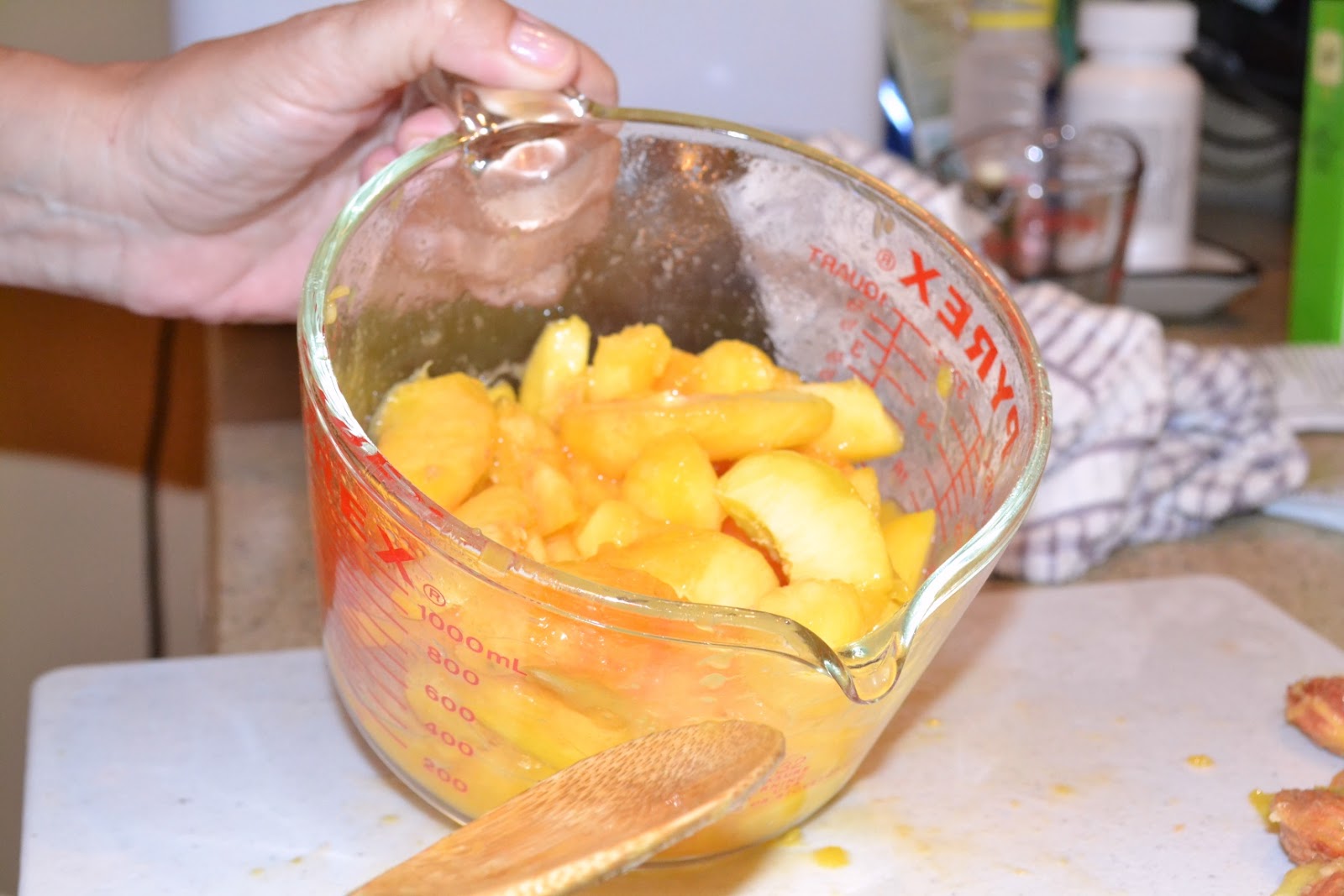 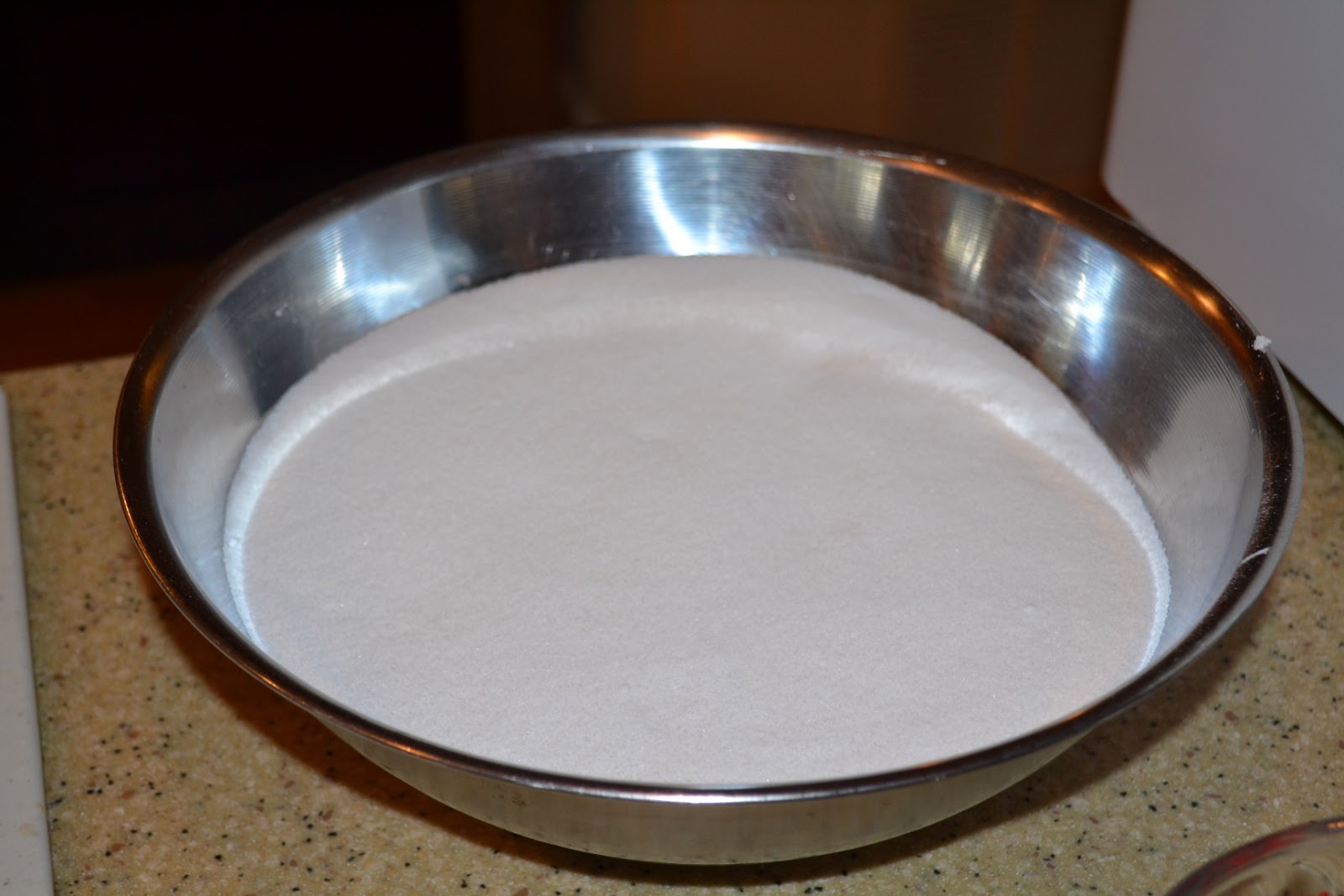 Yeah, a lot of sugar

Combine the peaches, sugar, and 1/4 cup of lemon juice in a sauce pot. We used a 5 quart pot and wished that we had used one a little bigger.

Slowly bring to a boil and then add the liquid pectin packet. Return to a rolling boil for 1 minute and remove from heat. Skim off any foam, though we didn't get this 100%. (For the bourbon batches we added 4 oz of bourbon when we put in the fruit.)

Note:  There are different types of pectin (powdered, liquid, low-sugar), so be sure to read your recipe closely and use exactly the type of pectin recommended for your recipe. 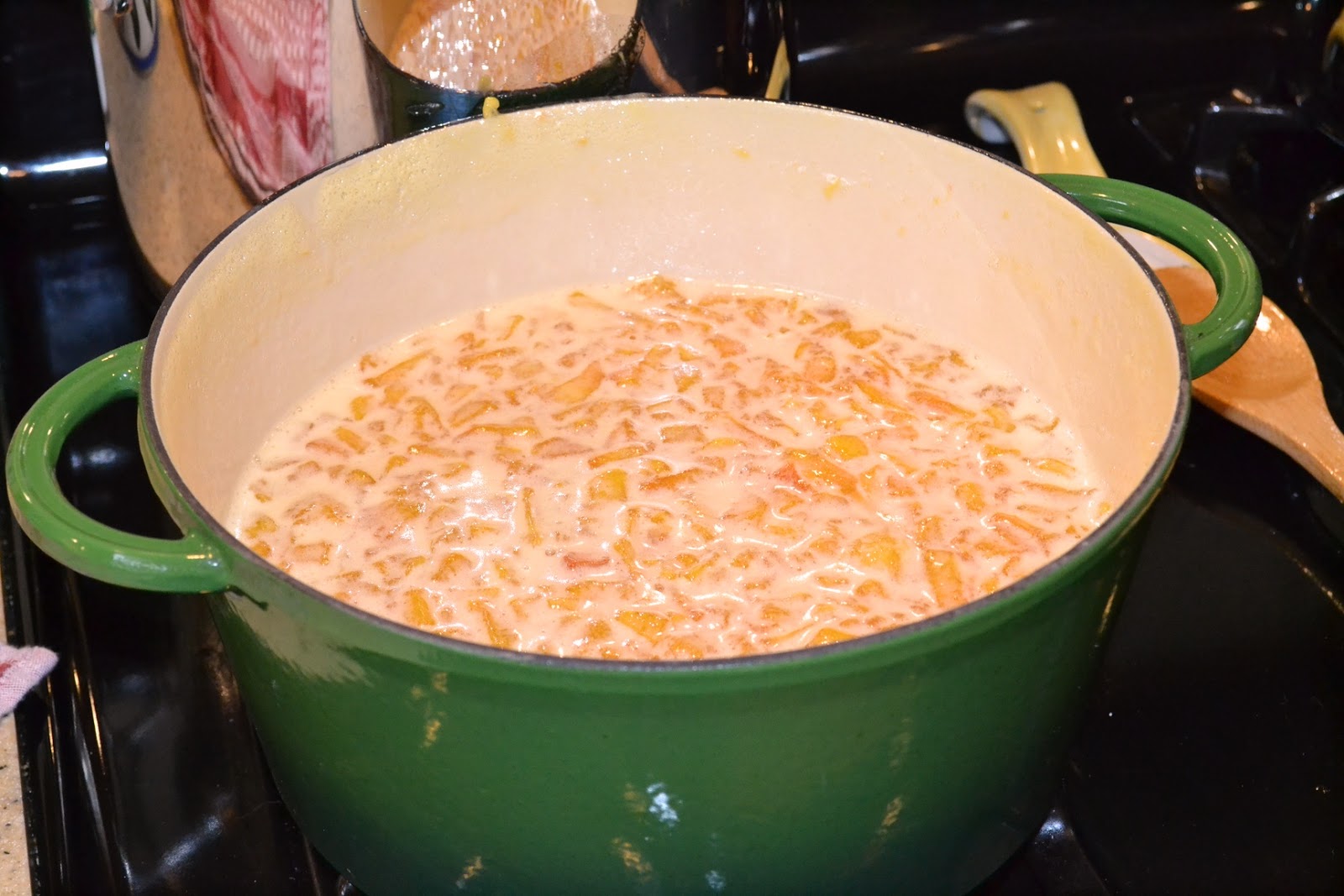 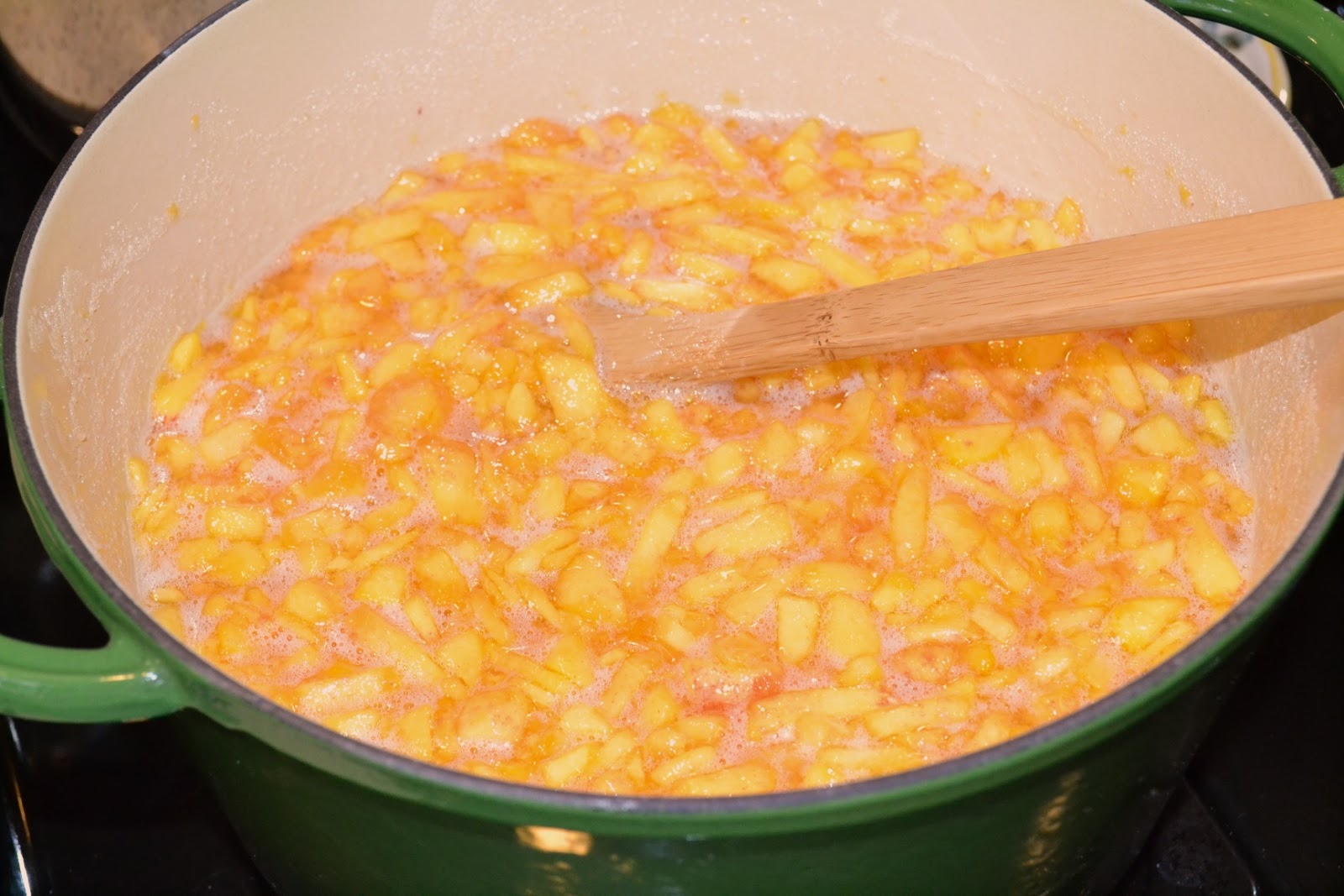 Now it is finally time to get them in jars.

Remove a jar from the hot water bath. Using the funnel in the kit, ladle in the jam leaving 1/4" air space between the top of the jar and the jam. 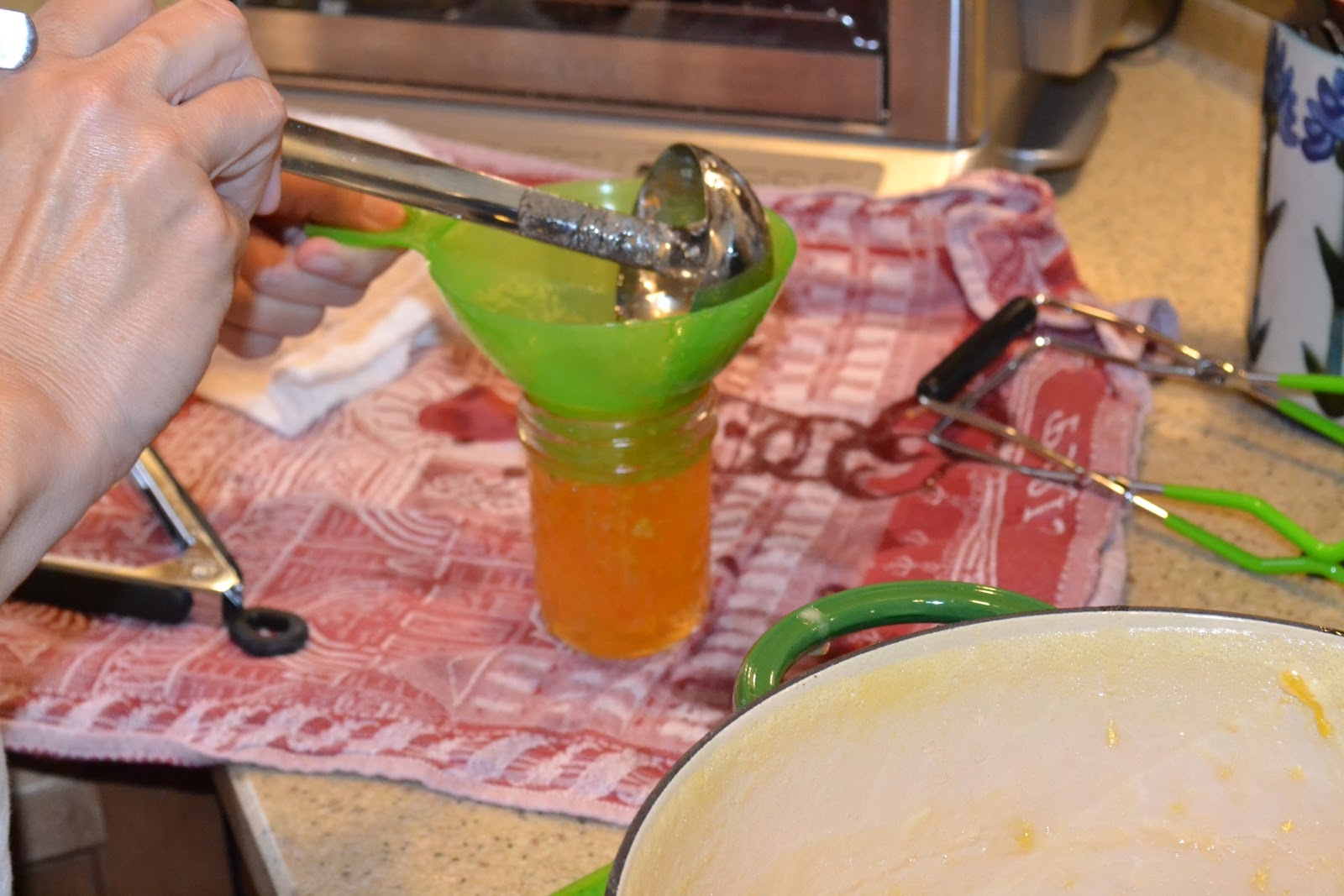 Carefully wipe the top of the jar with a moist clean towel to make sure no food product is on the sealing surface of the jar. 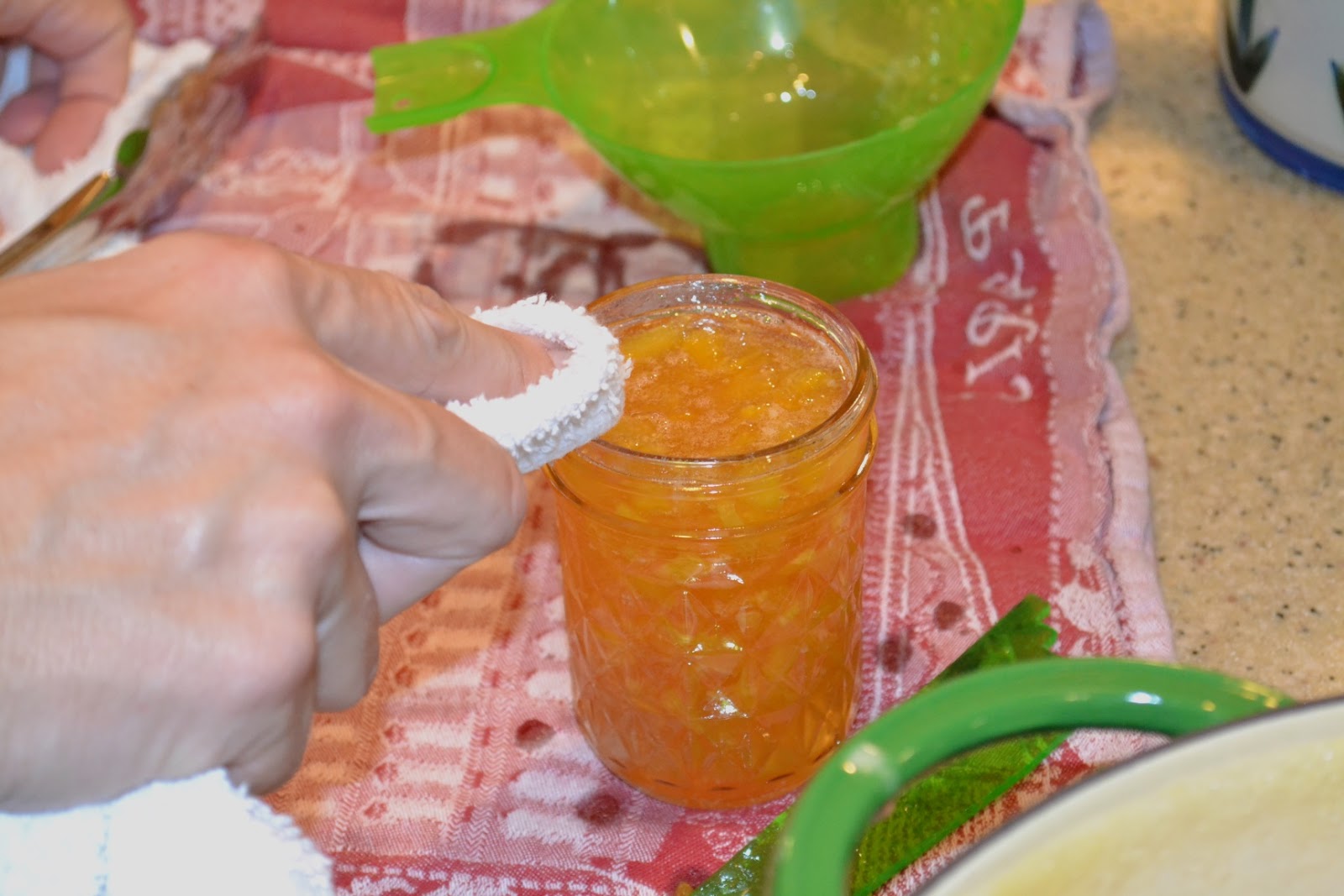 Then pull a lid from the hot bath with the magnetic stick and place on the jar. Screw on the lid to finger tight. Then return the jar to the preserving pot using the jar lifter that came in the kit.

Our jar lifter had a jar contact surface that was made from plastic and it almost immediately broke off. I spent the remainder of the evening worried that the metal-on-glass jar lifter would result in some dropped jars, but it seemed to hold up fine and we didn't drop one. 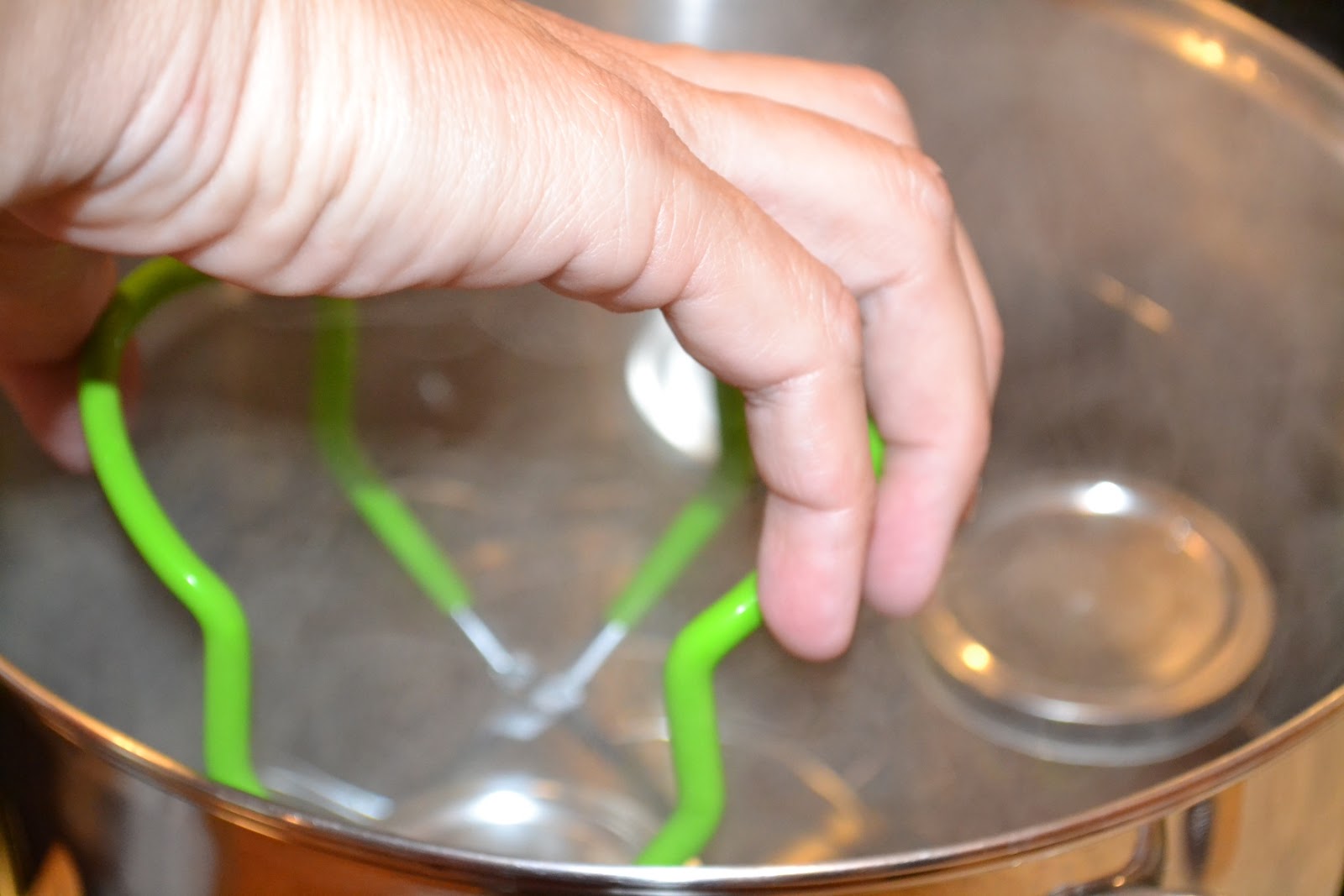 Returning the jars to hot water

One the big pot was loaded with jars, we turned up the heat to boil them for 10 minutes. After 10 minutes of boiling, remove the pot from the heat. After a few more minutes, we pulled the jars and placed them on a wire rack to cool. 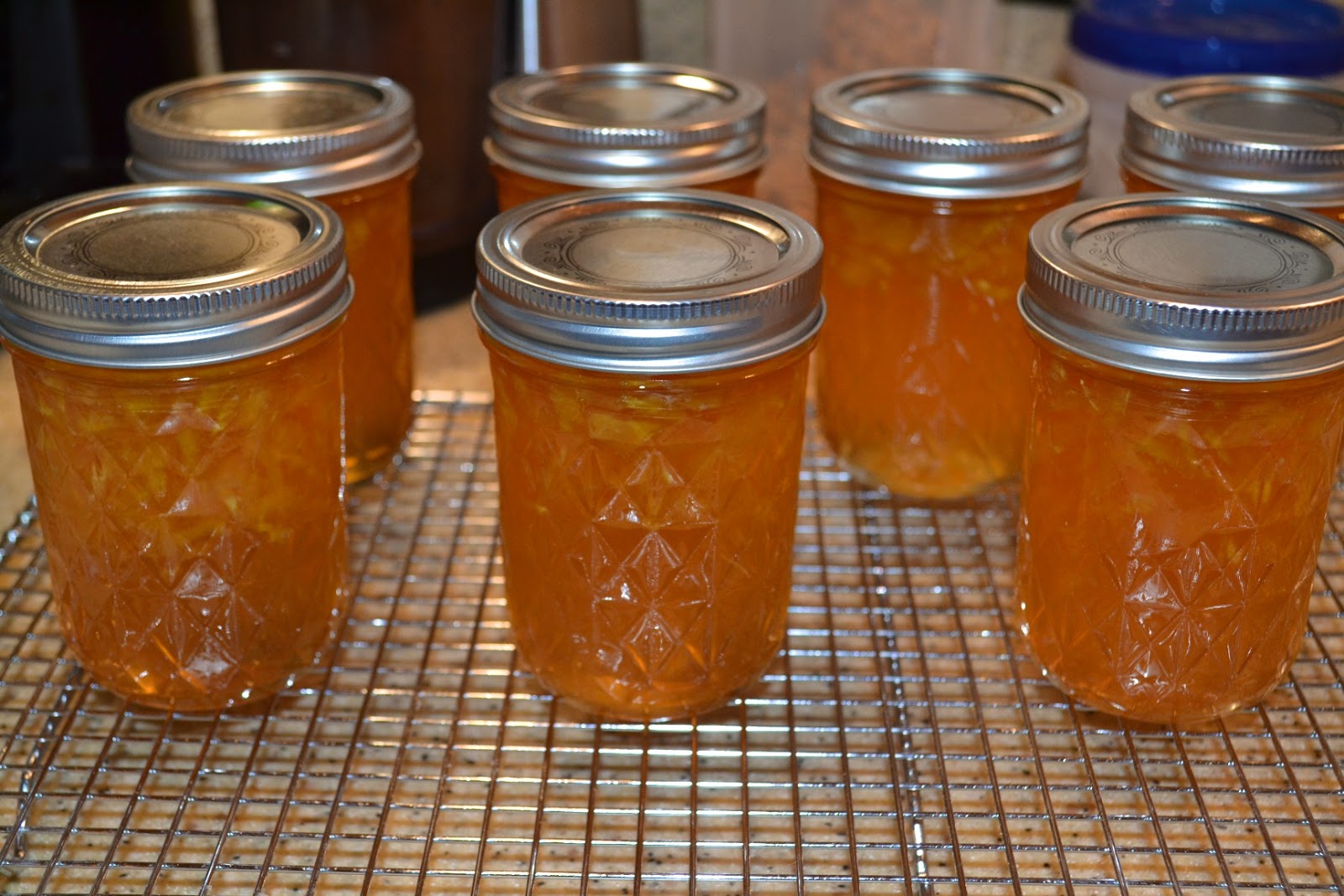 Cooling on a rack

After 10 or 20 minutes the seals began to pop as they seated.

The following day we checked the lids for a good seal by removing the screw cap and gently pulling on the cap with your fingernail to make sure it wouldn't come off.  We also checked to make sure the lid top was sucked in and could not be pushed in.

Finally, we also checked the jam consistency to make sure they set up correctly. We turned the jars sideways to see if the air bubble would travel in the liquid. Sadly, we did have one batch out of our four batches that was a little more liquid than we hoped, but after a couple more days, it seemed to firm up.

This was a process. It took us a whole day on Sunday to get two batches done, and then we returned to the process after work the following Monday for two more batches that took us until midnight to complete.

In the end, the jam is delicious, and we hope to share it with friends and family to give them a little taste of Georgia and Kentucky.

Posted by zdlatham at 9:39 PM
Email ThisBlogThis!Share to TwitterShare to FacebookShare to Pinterest